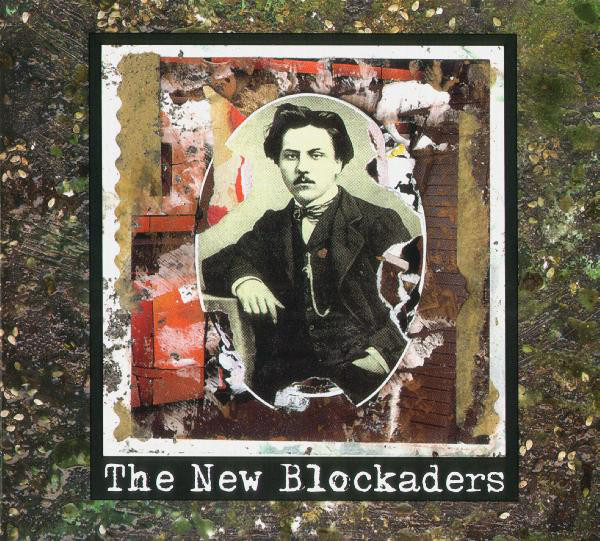 Quite a harmonic roaring blaster is Das Zerstoren, Zum Gebaren (BN028CD) from The New Blockaders, a single 49-minute wodge of broodingly evil metallic thunder recorded at All Tomorrow’s Parties in 2006, an event at which I did not assist, but was apparently curated by Thurston Moore. With a slightly longer credit list and thank-you list than I’m accustomed to for a TNB release, wherein mastermind Rupenus pours effusive praises on Damian Romero (who recorded it), the two members of Jazzfinger, Mark Durgan, The Haters and many more good guys, this is an attractively-packaged release on the Blossoming Noise label which reprints a Byron Coley note on the back cover. With such altruistic tendencies worn literally on the sleeve, are we seeing the first stages of the recuperation of the formerly hostile-to-everything TNB into the warm camaraderie of the music festival world? Probably not, but sonically speaking this one shows early signs of being every bit as “listenable” as the two vinyl box sets of TNB remixes…

Got another nifty dual CD-DVD pack from those lovely people at Asphodel in San Francisco. Their last one, devoted to the work of Otomo Yoshihide, still strikes me as a vast missed opportunity. Continuity showcases the extreme sound art of Zbigniew Karkowski, a man who has never disappointed when you want a Tarkovsky-styled trip to the urban wasteland sprawls of your mind, while the Japanese video artist Atsuko Nojiri handles the visual side. I’m just breezing through ‘Mass-Flow’Rate’ on the audio component of th’ pack, but the detailed electronic texturising which I hear is apparently made of up of samples from the primary opuses which appear on the DVD. These primary works could turn out really interesting, as they employ a small collection of chamber-music performers armed with strings, woodwinds and percussion, and the tracks they make are ‘extended studio manipulations/mutations of recordings of original instrumental material’. So it looks like I’m in for a fine bout of ‘reprocessing’ with this beaut! The deep orange criss-cross lines on the cover seem to beam their way into infinity across a field of saturated yellow, conveying a ‘cosmic’ odyssey which is no doubt guaranteed to enrich the eyes and minds of all listeners and viewers.

sunseastar offer a very artistic set of field recordings on their Fjærland CD. The idea is apparently something to do with creating musique concrète out of genuinely chaotic processes found in nature, such as ‘insects moving through grass’. In this endeavour they hope to emulate (or perhaps even go one better than) Xenakis, who used stochastic processes to construct his music. The duo of Andy Wilson (author of the excellent book about Faust) and Simon Crab, both of whom have been associated with Bourbonese Qualk, accordingly travelled to various exciting locations over the last two years, documented what they may, and brought back these eight cuts. All the sounds we hear have been extensively reworked, of course. What’s rather worrying so far that (a) the chosen locations include all the usual suspects already used by everyone from Chris Watson to Disinformation – a pebble beach, glaciers in Norway, a military testing ground, and a nuclear reactor; and (b) how boring and tidy the music sounds, despite their avowed interest in the exciting powers of ‘chaos’. Well, score one for the insects! Still, there is clearly intelligence and research operating here, so I will persevere.

Public Eyesore Records from Omaha have generously sent me enormous quantities of CDs and CDRs in the past, in such volumes that I’m usually too overwhelmed to even play them. This new batch of five, on their new subsidiary EH? label, may however hold some promise. Shelf Life‘s Rheuma (EH?027) delivers, in its opening cut at least, the sort of gently-chaotic collage construct drone and noise-lite dribble that keeps me happy for hours, as it spirals out in to never-ending whirlpools of slightly grimy seawater. Likewise, I can probably derive pleasure from parts of Hear Here (EH?029) by Giraffe. On this, Joseph Jaros and Luke Polipnick manipulate radio waves, samples and murmuring feedback on tracks like ‘Static Blanket Transmissions’ to sustain compelling moods. Marina Hardy has her Pink Violin (EH?032), a collection of 14 eccentric and dark pieces for her ghostly voice and disembodied bowing arm. Hardy tries on all kinds of musical clothing, but remains mysterious and chilling. I’ll happily file this alongside recent weirdies I’ve received by feminist geniuses such as Liz Allbee, Bela Emerson and Miss Violetta Beauregarde. Nagaoag are an uncategorisable bunch turning out the most ‘down’ version of turgid experimental-stoner music you could wish for, but unfortunately deconstructed to the point that it has no bottom end, or any underlying rhythm or shape. That said, the undeniable grotesquerie that peels off yama labam a (EH?028), particularly from the twisted voices and swollen tongues of the incoherent vocalists, gradually burrows a way into your forehead like some giant slug.