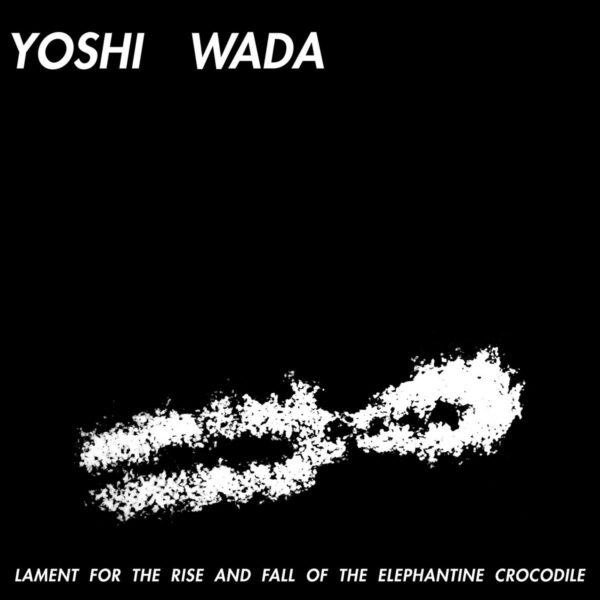 I see that Yoshi Wada‘s amazing 1982 LP Lament for the Rise and Fall of the Elephantine Crocodile (EM1074CD) has been reissued, by those enterprising good people at EM Records in Japan. In fact it’s a joint release with the Omega Point label. Wada was a Fluxus-inspired musician whose links to La Monte Young are often brought to the fore in many a press release, but he was unique…as a minimalist performer and quirky instrument inventor he takes some beating, and he does it all solo. I’m personally quite excited as this is certainly one of my favourite pieces of extreme sound-art and deeply rich droning music – if you follow the magazine on a regular basis, you may recall I jabbered about this record exhibiting my usual naïve enthusiasm in issue three of TSP. That was soon after Edwin Pouncey managed to find me a vinyl copy of the original release on India Navigation, by lifting it deftly from the racks of the old Soho Records shop in Hanway Street (said emporium now long defunct). Hate to sound like I’m playing the vinyl collector one-upmanship game, but it cost me only six bones! I assume one would pay a little more for it nowadays. My vanity is often stroked when I note that my blithering words have been recycled onto the excellent UbuWeb site, where if so inclined you could click on and download this Elephantine record as a coupla mp3s, but I’d suggest you buy this CD instead – let’s face it, there’s nothing like having a tactile package like this one in your claws! Besides, this version has been 24-bit digitally remastered, and the gatefold wallet includes rare photographs and liner notes…which I’m sure will prove of great interest (I haven’t unsealed my copy as yet). I have a lot of time for the EM Records ‘archival’ approach to reissues; unlike some shoddy reissuers, the label owner Koki Emura doesn’t neglect the contextual detail which enriches the experience.

EM Records have also reissued, for some curious reason, no fewer than five soundtrack CDs related to Australian surfing movies of the 1970s. Titles of these salty gems are Sea of Joy, The Innermost Limits of Pure Fun, Evolution, Drouyn, and Band on the Run. The last cinematic escapade appears to have been withdrawn from circulation at the last minute. While I can’t comment on the narrative qualities of the original movies (the visual attraction of surfing is not a diversion my eyes are naturally drawn towards), the music hereon appears to be quite jolly and melodic, clear and crisp folky-guitar rock with many melodic and poppy twists. Those providing these droplets of sun-drenched golden melody are The Tim Gaze Band, Tamam Shud, Farm, Tully, and Finch; and the compositional talents of Peter Martin and Paul Witzig are likewise represented in this batch. Each CD has at least one track title which alludes to the spiritual and mystical forces of nature that assist the surfer in the practice of his art: ‘Jesus Guide Me’, ‘Innerspace’, ‘Brother Sun’, ‘Lady of Truth’, and ‘Give Me Life’; and boast covers which stir one’s nostalgic vibes with fuzzy photographs of surf, sea, sunshine and birds.

Tim Fletcher of The Sonic Catering Band has sent me a new three-incher, Popcorn (smallPRINT Records), featuring the lineup of Peter Strickland, Tim Kirby, Colin Fletcher and Dan Hayhurst. (Strickland, a highly articulate and informed fellow, spoke to us at some length in issue 15). Doing it live in Linz, the Band ‘perform’ the cooking up a batch of popcorn on a recording so vivid you can almost smell the hotplate warming up. The brilliant package includes a cut-up of perhaps a genuine Col-Pak popcorn box and a circular photo of the finished product lurking behind the plastic prongs of the case. Best of all, a row of genuine unpopped corn has been carefully inserted into the spine of the CD box! (For some reason, this reminds me that Fluxus art exhibit by the guy who ate the same packet food every day for a year and lined up the empties as a form of sculpture.) 50 copies only of this little limited artefact gemloid. Those expecting a reprise of the 1972 electronic novelty pop hit of the same name has better steer clear of this intangible avant-garde statement, though!

Got a couple of newies from D’Autre Cordes, a French label based in Le Monastier. I think these have been in the box since November last year…The Story of Modern Farming is a duo of two gifted women, one Danish and one Dutch. On Someone New (D’AC141) they combine a species of free jazz alto sax puffing with strange electronics and wayward vocalising, and produce quite pleasing effects on the longer meandering tracks like ‘Hold Me Tight’, which drifts nicely along as a hypnotic, formless meditation on empty loneliness. Bruno Chevillon meanwhile, making his first record as a leader, arrives with Hors-Champ (D’AC 140), which delivers 11 tracks of fascinating noises so varied that it’s hard to credit he squeezed them all from a bass guitar and/or double bass. There are some electronic assistances, of course, and the very fine Franck Vigroux did production and editing.

Henning Lundkvist certainly intrigues the mind with his release The End of a System of Things (ESCUDRE010) for Komplott Records in Sweden, the same label that has released Ronnie Sundin. As befits a release with such an apocalyptic title, this conceptual sound-work presents an alarming and baffling collage of voices and music, some of which are culled from old movies and radio broadcasts, to suggest a vision of the end of the world assisted by nuclear missiles or warfare generally. Hysterical men and women deliver themselves of exasperated bellows as they attempt to come to terms with intolerable circumstances. The enclosed booklet presses much the same buttons, using puzzling stills and photographs that are steeped in cold-war paranoia; at least one of them is taken from that ghastly overblown Hollywood disaster movie that purports to have an ecological conscience, The Day After. There’s also a printed narrative text to do with escape and urban terror that is infused with a dark poetic gloom. It’s yet to be revealed whether there is any deeper metaphysical meaning implied by this brief sonic statement, but its opacity and general ambivalence make it a welcome alternative to the plodding rigidities of a movie like I Am Legend.