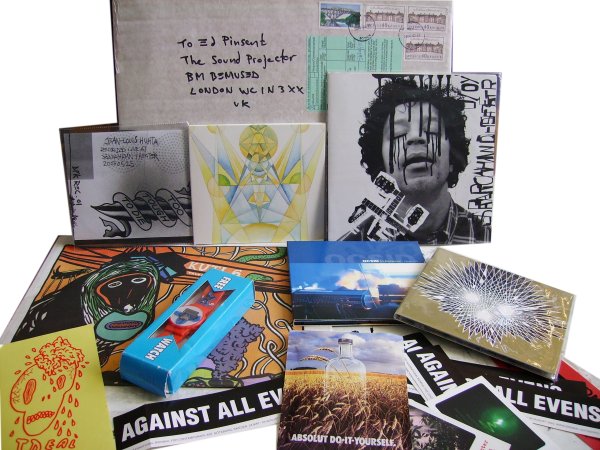 Couldn’t resist putting up a photo of this colourful package of goodies which arrived in late January to brighten my day. It was sent by the Swedish sound-artist Jean-Louis Huhta. That’s his visage on the striking cover of the seven inch single, an image rendered by Ola Åstraud; Ola is apparently “now curating shows with artists from 70s progg movement and forwards”, as Huhta explains in his enclosed letter. You may recall we reviewed his fine CD Halfway Between the World and Death (SLOTTET SLM5) in the current issue. In return he sent me the first-ever CD by OCSID called In Between (ORIGIN OR 2002) ; SKKULL by The Skull Defekts (RELEASE THE BATS RTB#23), those roaring noisesters Rylander and Nordwall (Huhta joined them for this 2006 release), and a CDR of his solo work recorded in Soderhamn Theater in 2007 (DFK REC 01). “I think there were about seven in the audience,” reports multi-media man Huhta. “I had a huge screen showing a film super 8 about concrete skate park construction.” It’s not all noise and concrete parks, though – the package also contained a copy of issue 6 of KUTI, the splendid broadsheet comic from Finland; a packet of seed for making your own Absolut Vodka; various promo stickers; and a plastic red watch branded with images of a masked superhero. “Just wanted to say I really like The Sound Projector,” Huhta wrote me in January. “The coverage is amazing! Strange that I have never come across it before. All good record stores here in Stockholm have shut down more or less.” “We’ve got the same problem in London,” I responded tartly. “It’s not just music, it has become very difficult for independent businesses to compete with Starbucks and so forth. Maybe retailing will be a thing of the past soon!” “Yes, we are in a critical moment,” pondered the profound sonic Swede. “It’s interesting, it’s like nature somehow, and nature nowadays is so affected (infected) by our actions.”