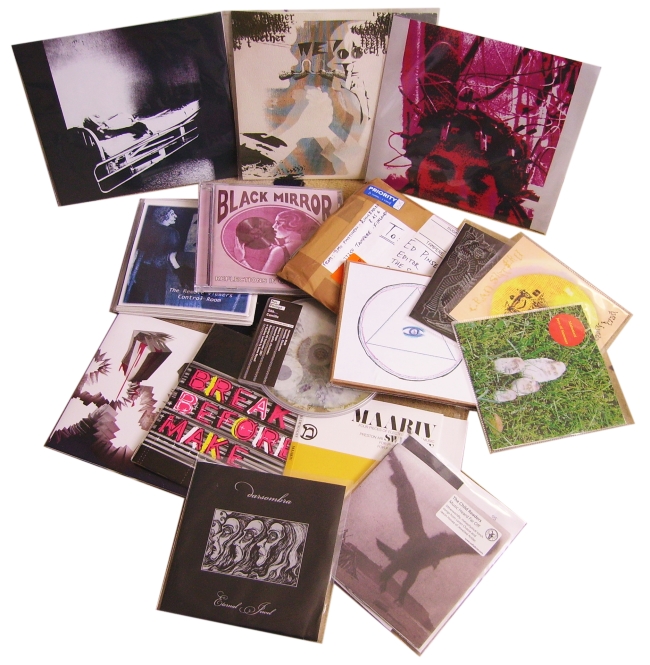 Darsombra is Brian Daniloski from Baltimore. He made an impression with his rather shocking little 3-incher for Public Guilt last year, and is back for a second bout with Eternal Jewel (PG015) for the same label. Here, his saturnine aspect is turned towards exploring five lengthy episodes of deepest melancholy, as confirmed by titles like ‘Night’s Black Agents’ and ‘Lamentings/Auguries’. Three haggard faces on the cover accept their sad fate with the stoicism of long-term sufferers. While not as immediately startling as his previous release, these process-based and layered drone epics look fit to inspire many a tortured night.

The Remote Viewers are a UK combo who transcend boundaries, crossing freely between the defined realms of improvised music, live electronics and song. Their membership is also very fluid, and you never get the same line-up twice across the five discs that make up Control Room, although certain core members (David Petts, Louise Petts) make their presence known. One of them is the saxophonist Adrian Northover, who put his head round the door of the Resonance studio when I was broadcasting my John Stevens show. Adrian turned out to have played in various workshops with Stevens, and we had a pleasant chat about the great man who I regard as having been slightly overlooked in the field. The Remote Viewers were I think associated with B-Shops for The Poor, and you can get this presumably self-released item direct from their website.

Got a couple of sizzling electronic blasters from Editions Mego on their new DeMego catalogue series. Skylla (DEMEGO 001) features the computers of Silvia Fässler and Billy Roisz producing many intriguing collisions of loud hum and fizzy textures, but Break Before Make (DEMEGO 002) by Gert-Jan Prins just edges ahead by dint of its conciseness (24 minutes total) and its single-minded devotion to screeching out its nerve-shattering digital razor sounds in compacted bursts that often barely occupy one minute of your time. Both are housed in triple-gatefold outsize wallets layered with hard-edged digital graphics by Tina Frank. Bring your own rusty spoon!

Nos Phillipé are the subdued UK duo of Jonathan Webb and Robert Hopps. On Shh…Camille (CONFRONT COLLECTORS SERIES CCS7) they create a highly ambiguous and cavernous imaginary space in your mind, using only electronics, turntable, and a prepared guitar. A single 23-minute performance from last year and released on Mark Wastell’s label devoted to reflecting all aspects of quiet and reduced improv.

Timo Puustinen of Tampere in Finland sent a new release by Elektronavn, plus other CDRs on his IKUISUUS label. On Cosmic Continuum (IKU-008), Elektronavn may appear to be competing with My Cat Is An Alien as regards LP titles, but this 38-minute solo workout contains some of the most intense music I’ve heard from him…showcasing his own voice overlaid in multiple overdubs of wailing and shouting, pitched against a sparse backdrop of droning and percussive music, he comes closer to the mysterious hermetic worlds of The Taj Mahal Travellers than many others who make the same claim. Also in the envelope, we have the rather aimless scraping of Open Eye Duo on Sea & Fish (IS-18), the strange pseudo-ethnic instrumentalising of Lead Sister II on Interplanetary Craft (IS-016), and the fine noisy trio of Matomeri with their rousing Joys of Summer (IS-017). For some truly obscure Finnish underground music, you need look no further than what this label has to offer.

Three fine seven-inchers of demented and dangerous noise arrived from Epicene Sound in Dayton Ohio, each one a split release fit for inducing teeth-grinding agony in the homes of most listeners. Blue Sabbath Black Cheer team up with Pig Heart Transplant on the most morbid and black of the three (ESS013); the B-side promises the experience of ‘Crawling Through Hell’, and the artwork depicts a lonely patient (or corpse) lying supine on a steel-framed hospital bed. Vestigial Limb and Fletcher Pratt offer us ‘Thick Airs’ on ESS014 and back it up with a troubling image of a human head embedded with electrodes, rendered in shocking pink. Wether and Teeth Collection‘s split (ESS012) is perhaps the most intriguing, with Wether’s brand of heavily-reverbed and booby-trapped noise demonstrated to great effect on ‘Anything Worthless’. Mostly slow-moving and heavy sludge-music on offer here, but the right amount of twist to the volume knob can reveal hidden and terrifying delights.

Preston Swirnoff was I think involved in the Somethings #1 compilation for Last Visible Dog; here he is on that same label with a solo release, Maariv: Four Pieces of Electroacoustic Music (LVD125). With utilitarian titles like ‘For Piano and Electronics’ which simply describe the processes used to realise the works, Swirnoff is aligning himself with the pantheon of 20th-century experimenters on this fine release. The cover art, a pastiche of LPs released on the Odyssey label (a CBS imprint) in the 1960s, confirms his aesthetic targets.

The Child Readers are Loren Chasse and Jason Honea of the Jewelled Antler collective, still widely regarded as one of the high watermarks of dogged and determined isolated American folk-weirdie individualism. On Music Heard Far Off (SOFT ABUSE SAB 021 CD), they propose 16 pieces of ‘otherworldly and metaphysical torch songs’. This they achieve by passing their original acoustic recordings (voice and acoustic guitars) through the mysterious and distancing lens of computer processing, resulting in blurred sonic images, layers of unexpected foreign bodies, and an overall ambience of dream-like fuzziness. When this works, which is more often than not, the promised sensations of nostalgia and wistfulness will descend upon you as surely as the black bird alighting on the desert on the front cover.

Black Mirror (DTD-10) is an unexpected treat from Ian Nagoski in Baltimore, who also sent me a solo LP of his music. Subtitled Reflections in Global Musics 1918-1955, this is part of an ongoing series from the Dust-To-Digital label in Atlanta who are, I assume, doing their level best to retrieve and rescue lost music which has been preserved on 78s and wax cylinders with the determination of the National Sound Archive, and re-presenting it for the benefit of a musically omnivorous 21st-century audience. Many American researchers and musicians too numerous to mention have been pursuing similar lines of endeavour for many years, including the notable Rob Millis in Seattle, but I had no idea that Nagoski (who jointly compiled this one, with Steven Lance Ledbetter) shared an interest in the field. On this amazing package, 24 tracks of early ‘world music’ from across the globe are represented in glorious ear-filling fidelity and supported with interesting contextual notes and images in a hefty booklet; it reveals aspects of a hidden musical history that can make your head swim. As a confirmed lover of early Blues 78s for the last 27 years, I’m pretty much convinced I need the full set of these already…