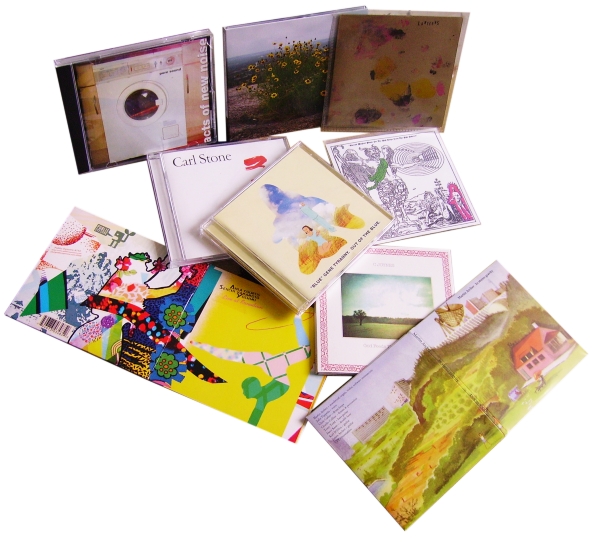 This column hates to play favourites, but this CD by “Blue” Gene Tyranny, Out Of The Blue (UNSEEN WORLDS UW01), made a fairly massive dent in my auditioning-hat when spun earlier in the week. Tommy McCutchon has been trying to send it to me for best part of a year. I don’t know much about this highly individualist polymath composer, real name Robert Sheff, apart from his contribution to a triple LP called Music From Mills which I happen to own. This particular collection of avant-songs originally appeared on the Lovely Music label in 1977, now available here in a fine 2006 remastered edition and sparkling like a multi-faceted diamond cast in platinum sheets…now, some of you will be wary of American modernist composers electing to do ‘songs’, and certain lamentable efforts by Philip Glass and Laurie Anderson are both primary exhibits for the prosecution, but you’ll be swept off your feet by at least three of the sumptuous jazz-inflected and complex melodies here, their mysterious lyrics delivered with masterful precision by a team of songstresses, while the woodwind players vibrate with warm harmonies and Tyranny himself throws out exciting mixed chord shapes from his various electronic keyboards. The Sound Projector has been playing a lot of Frank Zappa records at home recently, and in some ways this record could be seen as an alternative, cleaner approach to somewhat similar territory. Fabuloso!

On same label, we have Woo Lae Oak (UW03) by Carl Stone. In distinction to many noise-merchants who crassly print ‘Play It Loud!’ on their CD cover, this release arrives with the gentle suggestion ‘we recommend listening to this album at a soft level’. Stone is a serious composer and has his supporters (including many of the big boys of American Minimalism), but I’ve always found his work a little too ‘nice’ for me personally. This single 53-minute piece, originally released on Wizard Records in 1983, has some attractively diffuse shapes arising from a string section, but the pan-pipe sound brings it perilously close to New Age relaxation music. Tommy also kindly sent a copy of I Miss This (AUTOBUS RECORDS AUTO005) by The Weird Weeds, which is a set of fine and crisp avant-rock songs performed by a trio from Austin Texas. I’m often vaguely troubled by the use of the accordion in a rock music context, but this record is full of intriguing stuff which seems to occupy some middle ground between REM and English post-punk bands of around 1981.

I had to break the plastic cover to open my copy of Acts of New Noise by Pure Sound (EUPHONIUM EUPH004), finding the right-hand seam of the jewel case had somehow been sealed up as surely as if an arc-welder had been applied to it. Vince Hunt is occasionally joined on these nine cuts by guest vocalists and guitarists, but it’s essentially a solo record and a trip into the oddly-shaped mind of Mr Hunt. Twisted poetry, minimal song-craft and pre-recorded tapes are assembled into exceedingly bizarre shapes; the use of washing machine recordings on one track is a particularly inspired choice. “Took longer than I expected”, explains Mr Hunt in a note he has appended in his own hand to the press release from this Manchester record label. To do what – realise the project, or get it sent to me? Not sure. Pure Sound may be an acquired taste, but this record just emanates gruff personality in the same coarse and hearty way that Mark E Smith does on his spoken-word records like The Post-Nearly Man.

Martin Archer‘s In Stereo Gravity (DISCUS 33CD) is a double-CD set whereon he plays alongside English avant-greatsters Chris Cutler and Julie Tippetts and various sidemen, including the mysterious UTT on turntables. Archer himself does a certain amount of software reprocessing across the set, resulting in a somewhat cold but nonetheless intriguing surface sound. The cover painting is charming, and may represent a view of his home town Sheffield, but could equally apply to any part of England where faceless modern architecture and technological advances are visibly encroaching on nature and threatening other parts of our heritage.

Another new release from Brian Day’s Public Eyesore label features Anla Courtis, Seiichi Yamamoto and Yoshimi performing Live at Kanadian (PUBLIC EYESORE #110). The colourful psychedelic gatefold cover attracted me towards this one, and I always like to keep it touch with Anla’s recent developments. Here, he pitches his meandering and abrasive guitar solos against the rather formless backdrops of the Japanese electronicist, while Yoshimi’s aberrant wails are heard to advantage on the final long track. While not without its moments, I sense a certain lack of communication may have marred this musical encounter in ways that not even the United Nations could address.

Like Anla Courtis, (((vlubä))) are from Argentina, and their new CD Eternal Magic Music for the High King From the High Spheres (MAJMUA MUSIC MM 2) sees them making a bid for recognition among the many other contemporary youngsters who play long-form, freaky, quasi-psychedelic drone-rock music. While not quite as supernaturally spooked-out as they would like us to think (the use of book engravings from works on Alchemy and Diabolism is a bit of a gaffe), there are some intriguing moments of dark-trance droning and lost-voice howling on the second track which are bound to appeal to fans of certain strains of progressive German music. The label appears to be an imprint of Fire Museum Records in San Francisco.

Lanterns are the UK drone collective who I have a lot of time for. They’ve just resurfaced with a new CDR in a pretty hand-made cover called Sea Houses (SCREECHING SNOWFLAKE SS 07). Their music is not only simple, unpretentious, natural and beautiful, but quite often enhanced by a certain recording quality (not lo-fi, I must stress!) which adds greatly to the hazy, dream-like atmosphere emanating from all four of these sumptuous cuts. Phil Todd woulda been proud of these guys. “I find I can get lost in it for days,” writes Luke, the ostensible band leader, in an enclosed note on ruled paper torn from his notebook. He’s referring to something else entirely, but the statement is not inappropriate to this lovely record.

Music listeners who enjoy the acoustic guitar, UK folk music, and American ‘rural’ blues recordings of the 1920s are advised to bend an ear to C Joynes and his God Feeds The Ravens CD (BO’WEAVIL 28CD). Now there’s been a lot of lesser players on this label who can’t help name-checking John Fahey, but in this instance I find a simplicity and honesty in Joynes’ ripple-picking that stirs me mightily. His precise sleeve notes also reveal a depth of musical and historical knowledge that many of us can’t begin to match. This release is endorsed by Rhodri Davies, the great Welsh harp player who is usually associated with avant and improvised music, and he provided the sleeve note; speaking personally, I’ll trust Rhodri’s advice on anything. A fine collection of slow and sad music which somehow seems uniquely English too; the beauty of an English spring day is captured on the front cover (a still from a film about trees and clouds), while the inner sleeve prints a map of the British Isles indicating all the named stations from the shipping forecast (a broadcast which is of course known to all BBC radio four listeners as pure weather-poetry, from the airwaves).