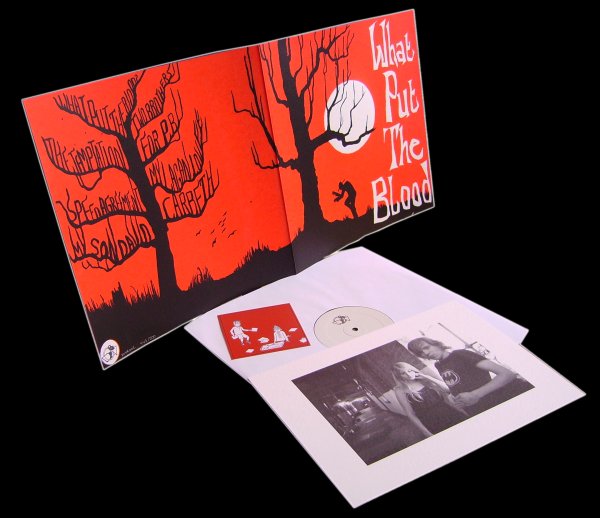 Always nice to showcase an attractive vinyl package as best we may….beautiful and striking screenprinted sleeve art on this one, resembling a dust jacket for a mystery novel published in the 1930s, executed with panache by one of the performers on the LP. This is the second release on Anna Tjan’s Dancing Wayang Records label, a small enterprise in West London. For each release, the idea is that she records the music herself in her own studio, and packages the production for issue as a limited edition art object on her own label. “My aim at this point is to release music that I recorded personally utilizing the studio I work in,” Anna reported in December last year. “I’m trying to have a hands-on approach to the label and the recording and mixing of the material is very much a part of that.” Acting as sound engineer, producer, art director and probably distribution manager as well…you can’t get much more hands-on than that! Directing Hand are Alex Neilson (the free drummer who also appeared on this label’s first LP) and Lavinia Blackwall, a Glaswegian singer with a background in studying and performing early music and member of Pendulums in her home town. Who Put The Blood (DWR002) is a record which exploits her beautiful voice and classical training, showcasing it alongside the noisy unkempt drumming of Neilson. One thing the record is trying to do is discover and expose ‘parallels’ between experimental noise, improvisation, and traditional folk music, a project Mr Neilson has been engaged with for some time. I personally have yet to be completely convinced about this line of thinking, but we can’t deny Neilson’s distinctive contributions to the 2005 LP No Earthly Man by Scots performer Alasdair Roberts. Besides being great to listen to (the voice of Roberts is unearthly), No Earthly Man is a fine record which has a very interesting take on notions of authenticity and continuity in the traditions of folk music, debates which have been occupying the minds of those in Cecil Sharp House for many decades. Accordingly on Who Put The Blood we hear their idiosyncratic and doom-laden version of Child Ballad 13 ‘Edward’, and we also hear Blackwall being prompted to turn in a free-form vocalising and wailing episode propelled by the manic drumming of Neilson. The latter experiment is clearly inspired by the Patty Waters LP for ESP-disk, something which has become a common touchstone for young minds everywhere these days, but it’s impressive how the classically-trained Blackwall doesn’t come a cropper at all and turns in a convincing bleat. I wish I could say the same for Neilson’s peculiar singing, but perhaps I will find his style is an acquired taste and concede that it adds a ‘rustic’ charm to the recording.

The ballad ‘Edward’ of course is known in many versions (including some American variants), and I’ve long wished to write an incisive essay that accounts for the existential gloom that this mysterious story exudes (like all good death ballads, it can be read as an unexplained detective story that dwells on the violence and anguish and doesn’t begin to solve the motive for the murder at all), and might somehow tell the tale of how we arrived at the version that was used as the soundtrack for the 1949 avant-garde film The Lead Shoes by the American visionary film-maker Sidney Peterson. When I first saw this astonishing film I was mystified for days by the unforgettable images, but also by the music, with its strange combination of unbalanced Dixieland jazz, wild drumming, and free-form vocalising that extemporises freely around the lyrical content of this ancient ballad. The credits don’t reveal much about how it came about, simply stating ‘Sound by The Three Edwards and a Raven’, but I recall reading that Peterson used the services of some enthusiastic college students. It’s not a random choice of music; the story of The Lead Shoes itself is a modern update on the same ballad, believe it or not. You can see this meisterwerk here and find out for yourself. At all events, perhaps this is an example of the same seam of commonality among musical forms, which Neilson is trying to mine.