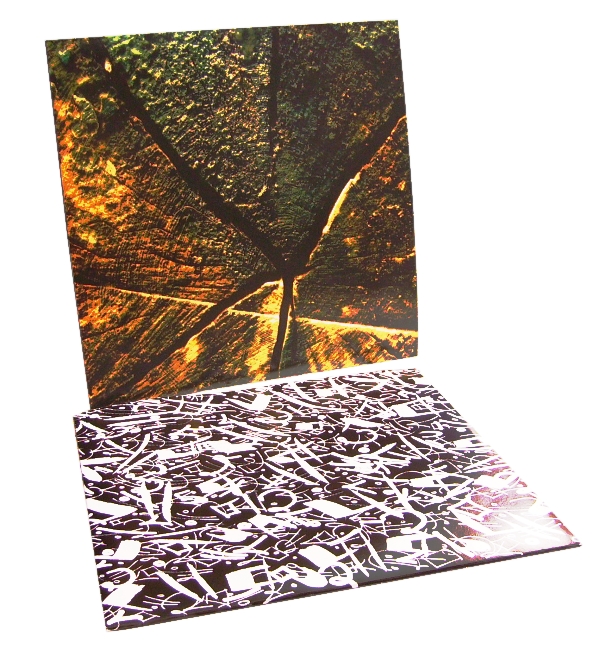 Three new pieces of beautiful music from the estimable John Clyde-Evans, also known in recent years as Tirath Singh Nirmala. The LP with the tree trunk and other woodland imagery on the back is a record he made under his Nirmala name with Richard Youngs, which maximises the loud and powerful violin droning for which this musician is so justly renowned, with percussion and bells for accompaniment. Not sure if this LP has a title, label or catalogue number even. Very clearly influenced by the music of the Indian sub-continent which he has made his home. The second LP with the randomised markings which almost resemble a disjointed cursive script is Delight In The Stream (AMEN ABSEN 001) and credited to John Clyde-Evans. With three long tracks recorded in 2006, this contains references to Eastern mysteries such as the ‘Etonal Ricedance’ and ‘Plug music for Noah’, references which (however obliquely) show the artist’s continuing preoccupation with water imagery and aquatic themes. Well, there’s Noah with his flood…and you need a lot of water for a rice field, no? And I assume the stream we are invited to delight in is a mountain spring, but perhaps it refers to something more metaphysical. Also a CD (not pictured) on Digitalis Recordings digi044, whose title is hard to pin down, but which features the tunes ‘Apetal Thunderfall’ and ‘Cutting Down Orange Towers’. Both this and the LP feature, I think, evidence of the musician’s experiments with digital recording and editing technology, techniques to which he was introduced by Neil Campbell. The results are certainly interesting to listen to – instruments sound heavily denatured, and all sorts of ‘impossible’ speeded-up events and overlays are taking place in cosmical patterns that would be impossible to reproduce in real time. At first hearing, these works may appear to lack the harmonic confidence of the music he performs with real instruments, and don’t immediately cohere into satisfying mandalas of musical perfection. But I think it’s a question of digesting the complexity over time, allowing the overall shape of these strange compositions to reveal themselves. Clyde-Evans is in no doubt that these new records are ‘much better…more oomph!’