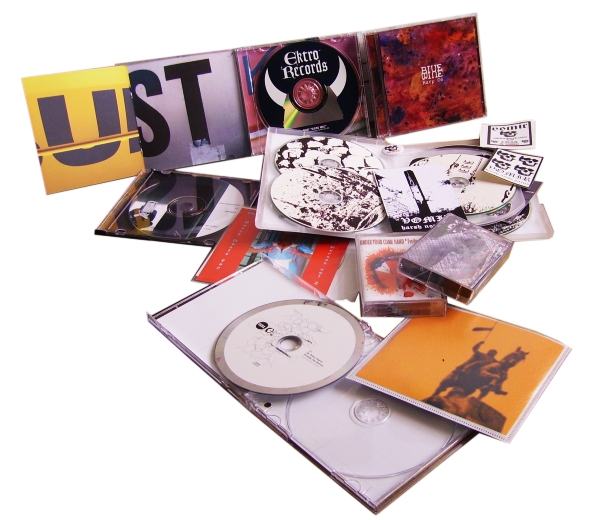 Vomir is Romain Perrot, the French nabob of harsh noise wall. Claustration (ATWAR023) is a six-CDR set presented in a DVD box with hinged components and each disc decorated with images of death (skulls and a gibbet being the most prominent). Plus you get a free button decorated with another skull and further inserts depicting depressing death imagery. While discs 1-5 present the glorious symphony of roaring racket that is Claustration, the sixth disc gives us some ‘bonus archive material’, including one track from Vomir’s first ever release. 40 numbered copies exist of this marginal monstrosity. It’s a grand thing that Vomir does what he does, but as I’ve said many times he steadfastly refuses the possibility of dynamics or change. So if you want 5-6 hours of grimly unchanging tornado-blast distorted horror-slabs, you know where to look. M. Perrot also kindly sent me two of his cassette tapes, one of which is his first ever release (he just found a few of these historic documents tucked away in a cupboard somewhere) and a split CDR he made with another harsh noise act whose name I decline to provide at this time. Both cassettes and the CDR, it is fair to say, feature sexual imagery and perverted themes quite prominently. One of them even uses the word ‘frottage’, an example of esprit Gauloise in the way it refers obliquely to the solitary vice Anglais. The CD box set was packed with paper towels, ostensibly to protect the discs, but perhaps I’m expected to put them to another use. Despite what I write about his work, the robust Vomir seems to be immune to criticism, thankfully. He warned me this was coming in February: “still no dynamics, no ideas…but you asked me to keep sending you my material hehehe”.

Blue Wine murmur through 19 lugubrious songs on Harp On (BROKEN ELECTRIC RECORDS DEV06); the leader of this post-countrified grunge trio is a modernist composer from Australia named Kahl Monticone. He sings in a world-weary bass voice. Not quite in my line, but the languid pace and detailed, symbolist lyrics may appeal to fans of Lambchop or Tindersticks. Originally on Devastation Records, it’s since been picked up by another label.

R.P. Collier from Portland in Oregon sent us Deconstruction of Twilight, a half-hour CDR of his guitar improvisations. This one is a little too sketchy and tentative for me, but there are some nice moments when the subdued feedback murmur threatens to engulf his meandering plucks. The sleeve note claims that it ‘opens out like an origami mandala of chill’. Enquiries to skeptikalist [at] gmail [dot] com.

It’s often hard for me to credit that Faust are still recording, but here comes Kleine Welt (live) (EKTRO RECORDS 046) as hard evidence. This incarnation of the famous and indefinable genius-deconstructionist heroes features original member Hans Joachim Irmler, the seriously talented organ player, and Steven Wray Lobdell, that deranged American wild-genius guitarist. Lobdell has been contributing great things to Faust projects for at least ten years and he can do no wrong for me when he picks up his mighty axe with a derrick. Irmler (perhaps the only original member here) is likewise proving a master of improvisation, sonic experimentation and electro-acoustic brilliance with his various solo and side projects. Only spun a couple of the long instrumental cuts on this collection of 2006 live performances, but I am mightily impressed by the steady relentless rhythms, and the sheer gravity and weight of these solid post-krautrock excursions. This CD has the potential to untap much dark energy and unleash it into the world.

Greg Headley‘s 24-carat abnormalities promises to be quite an intriguing bucket of electronic shape-shifting. Although created with guitar, software and shortwave radio recordings, the inspiration for the works comes from within the depths of his labyrinthine personality and life-changing episodes brought about by exotic travels. While most of this CDR is pleasant but ordinary melodic ambient droning, the opening cut is filled with exciting cut-up changery which veers from insane noise to soothing electric tones, with additional textures supplied from his radio set. Headley’s ninth release.

Candidate for ‘puzzler of the week’ is a curious recording by Miguel Carvalhais and Pedro Tudela, here trading under the name of @c. Their Up, Down, Charm, Strange, Top, Bottom (CRÓNICA 031) takes the practice of sampling into a strange and hermetic dimension. About 11 musicians were recorded over a five year period, only to have their distinctive contributions rendered down into this digital soup of confusion. Filled with perplexing angles and dimensions, to listen to this is like wandering in a crazy house. The title of the work I think confirms their approach to sonic architecture is somehow skewed with a perverse desire to keep turning everything sideways and upside down. Better not hire these two guys when you’re moving house!