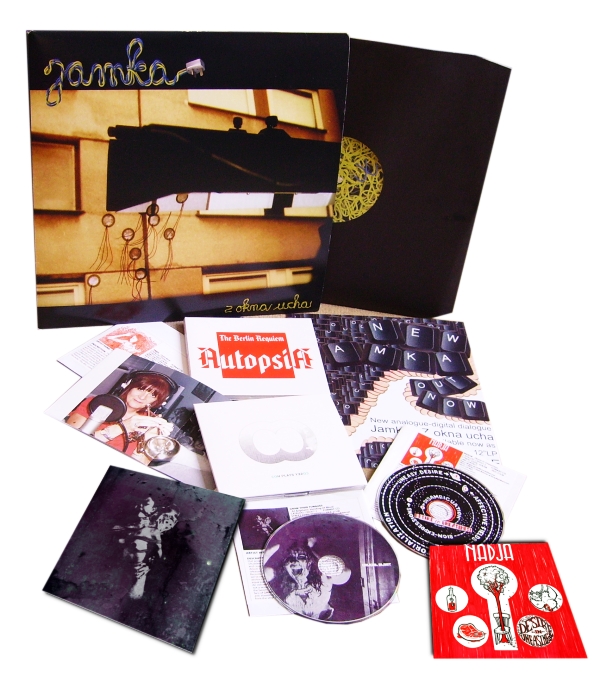 Gnaw Their Tongues has been something of a revelation to TSP contributor Jennifer Hor (and myself) this year, certainly as one of the sickest and most extreme examples of nightmarish Black Metal to have assaulted our innocent ears. “You can see just from these track titles alone the CD is screaming for a review in the TSP, if only we could get our soiled little paws on it,” wrote Jen in February, quoting titles such as ‘Teeth that leer like Open Graves’. An Epiphanic Vomiting of Blood (CBR067-2), originally on vinyl earlier this year on Burning World Records, will be out as a CD version later this month from Crucial Blast in the US. The Gnawsters are a couple of Netherlandish maniacs who are real masters at layering recordings – their horrific doom-laden thunderous guitar noise is combined with distorted orchestra recordings, found tapes, and spoken-word interludes describing all manner of unpleasant subjects which you don’t want to hear. The only recording that has induced similar sensations of imperilment and helplessness is Rehtaf Ruo, not a million miles away if you think of this work as an extreme form of electro-acoustic composition. About as far from formulaic BM as it’s possible to get, this is simply hideous noise fit for forcibly inducing the deepest and most insane brain-storms it is possible for human minds to endure. Shriek!

The label also sent Desire in Uneasiness (CBR065-2), the newie by Nadja. Ever since this Canadian duo became the hipster’s avant sludge-merchant of choice, plentiful releases have poured forth representing the overdubbed-guitar excesses of Aidan Baker and Leah Buckareff, not to mention reissues and new versions of their older works, but this five-tracker enjoys the distinction of offering all new material. I would hesitate to say the Nadja bubble has already burst, but so far I don’t hear a tremendous amount going on in these meandering droney grooves that might further the reputation of this talented duo. Business as usual, in other words – in spite of their new live drummer. Also in the package, Trees with Lights Bane (CBR066-2), an incredibly ordinary set of quasi-malevolent doom metal from a Portland quartet. In their hands, noise and feedback become obstacles to the free expression of hate, where they should be used as weapons radiating death at the listener.

Still in the realms of misery and murk, we’ve got a fascinating disc of black-wreathed atmospheric doom from Autopsia. The Berlin Requiem (OLD EUROPA CAFE OECD 084) achieves its effects using the lower register of a grand piano, plus sparing use of synth strings and other instruments, at times sounding as professional and polished in its production as the soundtrack to a film. The Dämmerung Orchestra assisted with these recordings made in Prague during 2006; inside, a photo of old-style mountaineers who seem oppressed by the enormous granite mountain range behind them as they trudge to their doom in heavy boots. Maybe they’re mentally listening to ‘Sounds for Remembering Death’ on this CD.

Coh plays Cosey (RASTER NOTON R-N 091) is an interesting oddity, made by Ivan Pavlov reprocessing and cutting up voice recordings made by Cosey Fanni Tutti. Atomised fragments made from gasps of breath and micro-particles of vowel sounds is what we hear, sometimes resembling pocket-sized disco-beats when cut into patterns and loops. The subtext to this release is something to do with human vulnerability, a theme the duo first hit upon when they were corresponding by email. There’s little compassion or warmth on offer in this strange, artificial sound-world, though; just lots of alienation and fear.

Lastly, we’ve got this strange experimental electronics LP by Jamka. Z Okna Ucha is available as a 12-inch artefact pressed in carbon fossil fuel, but also in digital form as a download for those who do not care to house such artefacts in their abode. Jamka are a duo of Slovak youngsters named Monika and Daniel who use vintage synthesisers, mics, pedals and drum-boxes to produce a species of avant-techno instrumentals, all heavily-amplified, recorded live, and whacked straight onto the tape with no overdubs. The resultant energy and excitement lifts off palpably from the grooves of this little beastie…Jamka spurn polite and tasteful production values in favour of nasty, loud and unrestrained analogue yawps. While I’m too old to groove out to every milestone on this LP’s project path, I gotta ‘fess up that it works like juju when you sense that the voltage overload becomes a little too much for our plucky pair to handle, and things start to veer slightly out of control. I’ll also welcome any record which name-checks the legendary Golem on side two!