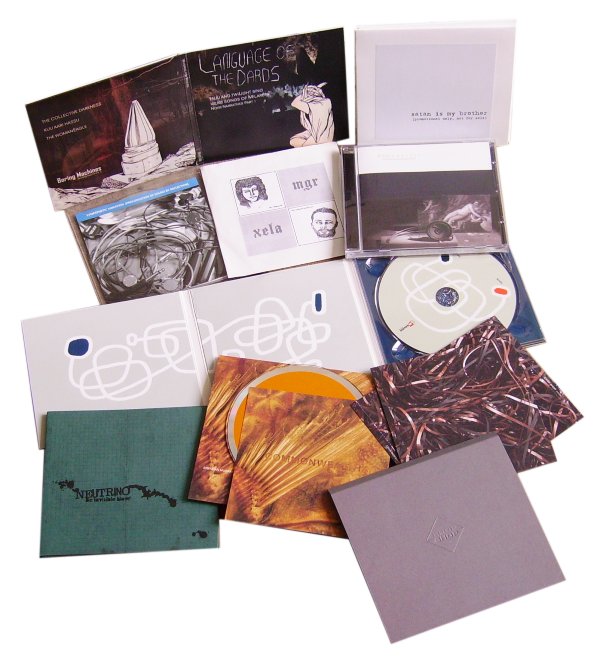 The Boring Machines label operates out of Treviso in Italy, a lovely small town I happen to have visited once in 1988 as a semi-accidental guest at a comics fair. Whispers For Wolves may have whiff of the ‘gothic’ in their name and mysterious dark cover art, but Language of the Dards (BM006) delivers an engaging mix of roaming free-form acoustic instruments and disembodied voices floating with spectral elegance across droney backdrops. Satan is My Brother with their eponymous record are a four-piece who almost look like a conventional jazz quartet set-up on first glance, until you hear their moody and introspective woodwinds combining with sinister electronic ambiences and snatches of sampled devil-worship rituals and incantations. Lastly, we have Marco Giotto with his solo CD under the name of Be Invisible Now!. Neutrino (BM002) is very low-key ambient electronic swirls made with analogue equipment and is intended as a homage to Klaus Schulze and The Cosmic Couriers, and its plain green cover conceals a bat-like image among the ink blots spread on a green cutting mat.

Also from Italy, the EAQuartett (GRIMEDIA RECORDS), who are a four-piece of academy musicians who combine brass instruments with electronics, free-form guitar, and rock drumming. The two core members started their Music Improvisation Research Group, or GRIM, in 2005. The cover art, which juxtaposes a classical art nude with a pared-down speaker set-up, may tell you something about the predilections of these players.

Yet more music from Italy, a CD by the estimable Andrea Belfi. Knots (DIE SCHACHTEL ZEIT 06) is an incredibly subdued suite of music in four indiscernible parts. Strangely muffled rhythms, resembling a drum kit played in a rehearsal studio four blocks away, leak out into a suffocating mass of atmospheric rumble producing an overall sensation which is not unlike being trapped inside a giant clam. The disc was mastered by Giuseppe Ielasi, another maestro of the quiet mode, and it’s just perfect music for tottering about under the blank sky of an English May afternoon. I sometimes wonder what became of Bowindo Recordings. In a sumptuous gatefold digipack which is the hallmark of this highly artistic label.

Dr Markus Jones has sent an interesting document of his large-scale electro-acoustic experiments. Sympathetic Vibration (Prolongation of Sound by Reflection) started out by gathering ambient sounds from around the campus of York St John University (where Dr Jones has a residency). Such a method reflects Jones’ cross-media interests (he’s worked with dance, installations, cinema and noise) and can be usefully aligned with the site-specific experiments of Achim Wollschied. The four long pieces here sit midway between field recording and electronic music and are all strangely compelling. Not quite a ‘released’ record, as what I currently hold is a CDR, although the insert is professionally printed and tells us that the ‘results will be available for download early in 2008’. I’d suggest exploring the University website to seek what ye may.

A split LP of guitar music is available from Barge Recordings in Brooklyn NY. MGR VS XELA (BRG 004) has been sent as a CDR but you can buy the LP or get a digital download from the label website. MGR is Mike Gallagher, a guitarist from the redoubtable Isis, and on Shipping Gold he presents 16 minutes of extremely troubling post-post-avant metal guitar stylings played in a relentlessly slow mode. Anguish-inducing frown-music at its finest…XELA is John Twells from the UK, and his allotted 23 minutes are used to present Calling For Vanished Faces, a fascinating construct of detailed sound-collage. Choirs of eerie voices float around this quagmire of noise, competing for air with a mad jazz drummer and waves of guitar feedback. In its way no less suffocating than the MGR side, yet the angelic voices seem to offer some cause for hope. Boy, I’d certainly like to get a vinyl of this one…

Chop Shop is the New York sound-art veteran Scott Kunzelmann. His Oxide (23FIVE CDP 801673901225) is derived from tapes of his metallic sculptures, junkyard specialities which have featured heavily in his steely soundworks from over 20 years. Those fearing a brutal assault on the ears need not worry however, as this 49-minute CD is an intriguing assemblage of long-form abrasive drones, whose varying timbral qualities have been further distressed by moisture damage sustained by the original tapes. Cover imagery features a close-up photograph of a morass of unspooled cassette tape forming a worm-like jungle of disturbing proportions, and it arrives in an embossed slipcase bearing Chop Shop’s emblem. From same label, we have Boston-based Brendan Murray and his Commonwealth (23FIVE CDP 801673901324), a studio-based many-layered recording. He intends this mighty, monolithic sonic structure as a gesture of respect towards ‘classic [American] minimalism’. Again, 49 minutes in duration, this slow-moving epic is filled with many gradual changes, which I suspect will reveal fine-grained detail if played at excessive volumes. Golden-hued cover art could be a close-up of the fin of a fish or other marine life from the ocean floor. Very deep!