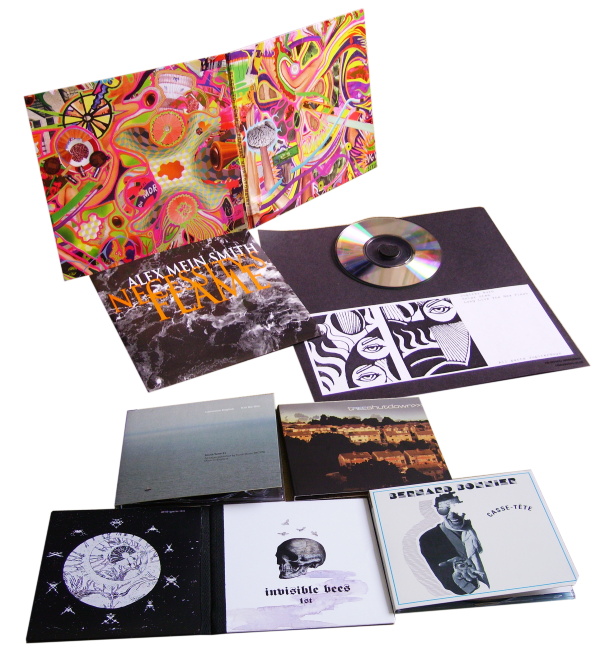 Bernard Bonnier recorded Casse-Tête in 1984 (or is it 1979?) and had it released on the Amaryllis label in France. There’s been an unofficial version on Creel Pone, but here it is in a fine authorised reissue digipack (ORAL CD 23) from Oral Records in Canada. It’s described as ‘musique concrète’, but Bonnier appears to have been an overlooked precursor to much New Wave and underground rock, and the bold mixing techniques on this record are much more appealing to these ears than the dessicated formal music currently issued on the Empreintes Digitales label, for example. Casse-Tête translates as “puzzle”, and the strange leering man on the cover has a face made of jigsaw-puzzle pieces. Very welcome record which I recommend.

Lawrence English recorded Kiri No Oto (TOUCH TONE 31) in Brisbane; it’s pretty much an anthem in praise of the oceans of the world and his friends who live across said oceans. Evocative titles such as ‘Organs Lost at Sea’, ‘White Spray’ and ‘Waves Sheer Light’ match up perfectly to the slow and solemn ambient music. Although English has made some quiet and imperceptible recordings in his pursuit of capturing the energy of nature, this one is very full-bodied. Jon Wozencroft has provided two suitably oceanic images. A record you can play alongside your Isis LPs.

tREEshutdown (smalPRINT SPRCD003) is a compilation produced and put together by Tim Kirby, who I think has been associated with Sonic Catering Band. He wrote or co-wrote all the songs and instrumentals on this CD, featuring performances credited to Ufolk, ReporterGB, Solvinia, Soundcutt, Noriiko, MaryHad and The Casio Consortium. Some of these may in fact be aliases for Tim – I know for a fact that Lessons Around Us, who also appears here, is him in his treated field-recording guise. Many of the pieces seem to be intelligent versions of slow and smoky electro-pop not a million miles away from Portishead, while torchy singers such as Caroline Pringle add their tasteful warbles. Apparently, 25 copies of the album have been attached to trees in Bristol; visit the smallPRINT link for further details.

Alex Mein Smith is a young New Zealander fellow living in the UK just now. Necessity’s Flame (HIGH TENSILE 02) is a drumming record where the beats are sufficiently roughed up, reprocessed and squelched into strange new sonic forms that keep it on the right side of experimental music. Over the top of his rather doom-laden hammering and pounding, Smith adds minimal melodies with guitar or moog. The CD has a solemn caste, but the overall effect is powerful and intriguing.

Invisible Bees are the London-based duo of Damian Burgess and Elin Eriksen. The CDR 1st (ANTI-GURU 001) arrives in a very convincing hand-made sleeve, covered with tons of symbolic images including a great skull on the front. The subdued almost-ceremonial music appears to have been made entirely in acoustic mode, using strings, accordion, harmonica, zither, recorders and percussion. The album is subtitled ‘insect music forms volume 1’, although it’s had to connect these opaque and perplexing musical statements with the life of insects. A quiet and mysterious record which may have hidden depths.

Black to Comm is mostly Marc Richter, the German one-man operation who also happens to run Dekorder Records. On Fractal Hair Geometry (DEKORDER 027), he delivers seven rich tracks of twisted, shape-shifting and overloaded drone noise with the help of Renate Nikolaus, Ulf Schütte, Jonnna Karanka and Guido Mobiüs. I’ve been slow to see the appeal of Black To Comm’s work, but moments of this new one are starting to make sense to me. There is certainly a lot to listen to, by which I mean every studio concoction has been well-baked in the oven and a rich fruit-cake of an album results. One of the surrealist track titles pays homage to Leigh Bowery, of all people. Gorgeous gatefold sleeve; a psychedelic painting-and-collage mind-meld from the hands of Oliver Ross.

Lastly here are the very fine Jupiterdogs, with Jupiterdogs (PALIMPSEST RECORDINGS PR09) or Jupiter Burn as it is also known. I think I have all three releases by this low-key UK trio. I am very fond of their gritty approach to wielding their instruments, which could be anything from piano to percussion or guitar or anything with strings they can scrape and pluck. Although not as seethingly bitter as their previous release, this short EP still has bucketloads of strange monotonous tensions and will keep you listening with bated breath. I like the way they seem to have bypassed all ‘conventional’ modes of normal improvisation, so they end up sounding like themselves, instead of trying to copycat the so-called big names in the improv world. This English label has a lot of good stuff which I recommend, particularly the amazing Dead Rat Orchestra who despite their off-putting name do a very good update on English folk music, combining it with all manner of outside influences.