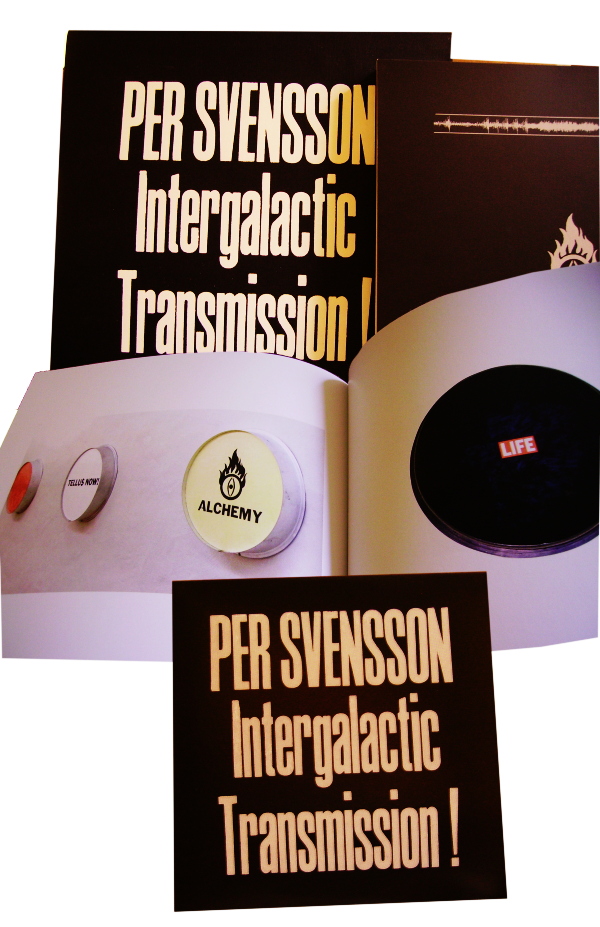 The amazing Swedish artist Per Svensson sent me Intergalactic Transmission!, along with a number of other interesting documents and releases which are buried in another cardboard box destined for later exhumation. The large black box is about the size of something you could use to store your seven-inch singles, and inside is a CD in a card wallet plus a thick book which is the catalogue of his art exhibition at the Ystad Art Museum from May-June this year. We are slightly familiar with this fellow from his presence on the Elgaland-Vargaland compilation from some years ago, his Audio Laboratory persona on Firework Edition Records, and his solo work as The New Alchemy (an avant song-based project which is something of an acquired taste). However, this ten-track CD is something of a stunner. I think the sound-art pieces represent aspects of his many-layered work, which is also expressed in visual forms in the catalogue through striking sculptures, paintings, photographs, drawings on paper, performance actions, and art gallery installations. He’s made powerful field recordings of thunder and lightning, and apparently even captured the sound of solar energy using solar collectors and sun panels on ‘Recordings from the Sun’. (Disinformation captured solar prominences as radio waves, but ended up with something quite different). Svensson has also made sound documents from the acts of drawing, painting and building sculptures. Most astonishing of all is the eight minutes of ‘Intergalactic Transmission!’ itself, where radio voices were broadcast over loudspeakers pronouncing ‘we are the angels, we are the aliens’. Scarily, these voices are said to be ‘unidentifiable supernatural sounds’, producing an effect you’ll want to file alongside your Ghost Orchid CD from Touch. While some of the Swedish brigade (e.g. Carl Michael von Hausswolff, with whom Svensson has collaborated on numerous jaunts) pride themselves on austere minimalist statements, Per Svensson strikes me as a maximalist, a polymath, and one whose brain is so brimful of creative energy that it spills out into many forms, all of them packed with cryptic information, colours, texts, symbols, rich surfaces and engaging layers. Alongside his interest in the environment (the more rugged the terrain, the better), there is a visual preoccupation with alchemy and all its hermetic symbols, which surface repeatedly in his lush paintings and detailed drawings. There’s a real engagement with the very juices of life itself, and he seems to live and produce very much in accordance with his slogans such as “You Can’t Control Creation!” and “Free The Mind!” Who can disagree with that?