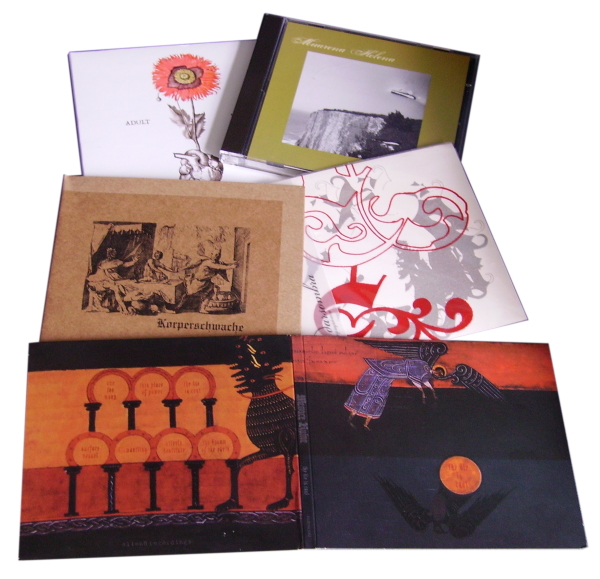 Salute the oncoming winter solstice with Menace Ruine, that’s my advice…the latest release from this Canadian black metal project is The Die Is Cast (ALIEN8 ALIENCD82), a fatalistic title for a CD decorated with sombre, candle-blackened religious icons from the orthodox church and suggesting that mankind’s destiny is a nightmarish combination of many-headed monsters, headless figures running about aimlessly, and a coldly indifferent angel of salvation hovering over a sickly extinguished sun. The music seems to combine the vocalists’ warped attempts at polyphonic choir singing with the most monumentally huge guitar riffs you could wish for; as if Hildegard of Bingen were recruited, by time machine, to join Black Sabbath. A mesmerising feast of dark metal noise which, like the best moments of Deathspell Omega, is laced with intense bursts of spiritual visions.

Further unhinged guitar sludge from American duo Korperschwache, with Eight Velvet Paintings for Helen Keller (INAM RECORDS 24). Unlike their Canadian brethren, the Korpsters see no salvation for mankind whatsoever, but tend to regard the entire globe of human affairs as a circus of absurd madness. This sneering view is somewhat confirmed by the old engravings on the cover which depict all manner of mad atrocities and follies in symbol-laden morality tales. This prolific Texan duo go for lengthy tracks of guitar and drum excess, rendering everything as heavy and leaden as possible, then undercut their own seriousness with bizarre titles like ‘Taking metaphysics for a test drive’. 100 copies only of this grim snarler.

Darsombra, while still not averse to dabbling in the darker edges of the psychological brew in his seething noggin, has a sophisticated edge to his noise and tape-loop experiments which I always find engaging. He also keeps changing tack to outsmart any followers, and this new release Nymphaea (PUBLIC GUILT PGL 009) is an interesting departure of sorts – I would normally avoid a remix project with all possible dispatch, but here these 13 different versions (apparently) of the same song by Darsombra are given utterly radical remakes by guest stars Pulsoc, Guilty Connector, Ala Muerte, Perfect Teeth, Blood Fountains and several more creators. Some add beats, some select a small mid-section of the song, all of them create something new. The essentially hypnotic trancey core of the song is repeated and driven home with a multiplication factor of 13, resulting in an intense listen. The project was carefully planned and co-ordinated with the help of label boss, J.R. A fine release.

Muarena Helena appear to be a six piece of English avant-rockers, achieving in their ranks a balance of gender (half male, half female) which even The Au Pairs couldn’t manage in 1981, for all their NME-friendly talk of advancing the causes of sexual politics through post-punk music. On Fierce Pale Hen (ROCK PIGEON RECORDS NO NUMBER), the combo turn in a collection of crisp guitar and piano instrumentals, and some songs, with a tremendous amount of variety and sonic environments explored through the album (this may be because it was recorded in four different studios / locations). While their attempts at romantic ballads are a little thin, I like the angular and shady instrumentals; there’s at least one guitarist here who knows instinctively when to keep things simple, working a two-note riff for all its worth. And the song title ‘We’ll think of Yetis’ is a nice update on Roky Erickson’s ‘I Think of Demons’.

Lastly, here’s Carlos Giffoni with a solo record Adult Life (NO FUN PRODUCTIONS NFP-40). This is excellent, a perfectly intense set of experiments with monotonous, smothering electronic sound perhaps made with old analogue synths. A rich yet abrasive sound results, partly thanks to help from studio wiz James Plotkin who did the mastering. These five relentless pieces will pull you unwillingly into a mental arena where you have little choice but to contemplate the same imponderables that are currently preoccupying Giffoni’s mind – ‘Comfort and Pleasure’, ‘A son with no father’, ‘A permanent choice’ and ‘The Endless Mirror’. Clearly, Giffoni finds that man’s adult life is fraught with impossible dilemmas, many of which are a matter of life and death. On track four, ‘This is how you pull the trigger’, he may even be contemplating the second of those two options. However, the flower sprouting from a human heart on the cover (Megan Ellis artwork), seems to promise some sort of renewal and hope amongst the teeth-grinding pain of existential horror proposed by this record.