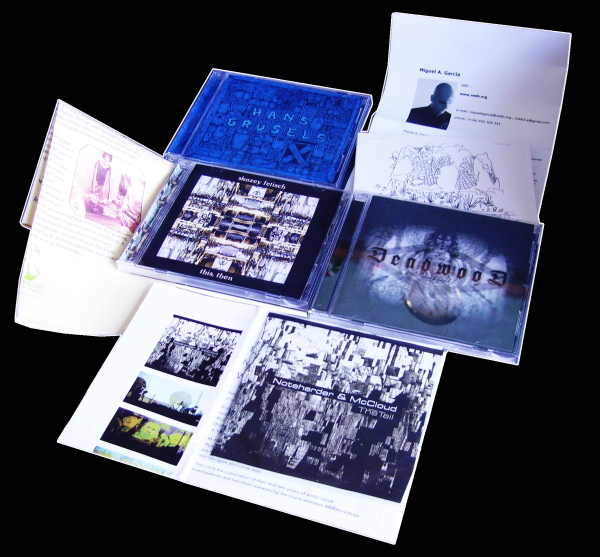 The combination of improvised sax with electronic music is usually a winning combination for me personally. If you’re of a like mind, you could purchase The Tail (WM RECORDINGS WM000088) and you can hear 14 tracks of Chris Parfitt and Geoff Reader doing it live in Stoke Newington. These UK players trade under the name of Noteherder and McCloud, and call themselves ‘sonic investigators’ mainly as a form of private joke rather than as some sort of pretentious description of their artistic endeavours. Parfitt’s tootling is acceptable, but too ‘wordy’ for me. The electronic half of the act gets my vote; his subdued gurgles often add an air of anticipation, even if the pieces generally feel somewhat unfinished.

Further subdued electronic murmurings of a quite different hue on Armiarmak (RMO PRODUCTIONS RMOMAG), by the young Basque composer Miguel A. García. He produced it using nothing but a mixing desk and an oscillator for the most part, but whereas many dabblers using similar tools emerge with something clean, somnolent and insipid, García’s minimalist work has a gritty, vaguely ugly texture which appeals to me, along with its unblinkingly stern countenance throughout. To listen is like staring into the stony visage of your own executioner.

Deadwood is a Swedish artist immersed in the inky depths of his own emotional whirlpools, as evidenced on Ramblack (COLD SPRING RECORDS CSR104CD), his new CD of “black ambient / death noise”. The thick layers of palpable atmosphere on this disc could be the result of many hours spent toiling in the studio, adding multiple layers of processed sewage. Wallowing in its own ‘sickness and depravity’, Ramblack may not be quite as intensely negative as its creator hopes, but its sinister blankets of noise, smothering loops and hideous voice effects have a strangely beguiling effect, as if riveted by the eyes of a hypnotic wild beast. Artwork presses all the buttons you’d expect – satanic symbols, gothic typefaces and snowy desolate forests, all printed on jet black paper.

More electronic music of interest from Skozey Fetisch, released on the wild San Francisco label that more often specialises in extreme and twisted noise. This, Then (RESIPISCENT RECORDS RSPT024) may be all the work of Mark C. Jackman, starting with reel to reel tape recordings and experiments on an analogue synth, and reworking them in a very digital way. But a description of the working methods used are inadequate to understand the resultant eerie glorp that pours out of your speakers when this freekeroonie is spun. The sound of it seems to sit in some twilight zone between classic French electro-acoustic music from IRCAM, electronic music for the World’s Fair in 1968, and Tod Dockstader’s back catalogue rebuilt by aliens who don’t quite understand what they’re doing. All of the above and more is filtered through a nightmarish, crazy-house mentality, made all the scarier by the fact that the dreamer seems to be wide awake with both eyes open. A ghastly, lurid record of genius.

Same label has also sent us the new release by Hans Grüsel’s Kränkenkabinet, whose previous release for C.I.P. delighted us with its imaginative and deliberately ugly approach to noise-making. Since then, this German émigré (so we are informed) act has become something of a cause celebre at underground US noise festivals like No Fun. Blue Blooded Türen (RESIPISCENT RECORDS RSPT027) is no less extreme than the previous disc, and conveys the same delicious effect to your ears – every sound, every note, feels like it’s been dipped in boiling liquorice, hot tar and thick grease. Performed with the help of the great Liz Allbee and others, this is mostly a solo turn for Hans with his very impolite wild and yawping electronic set-up, whose unwieldy complexity can only be mastered by his gnarled hands. The cover artworks, still in thrall to the line drawings of Edward Gorey, exude mystery, decay and squalor in equal amounts.