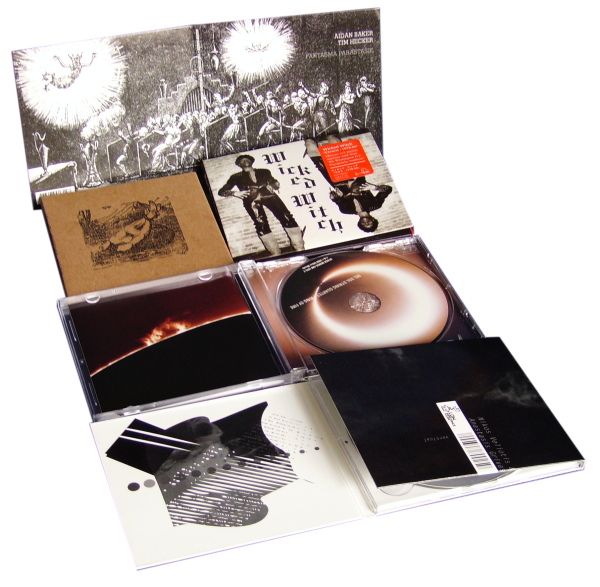 Nikos Veliotis is the Greek emperor of the restrained cello – he can fill churches and cathedrals with his gut-tuned langourous drones which are of the utmost severity yet still encapsulate a soothing balm in their stern notes. He’s just made a new record Vertical (LOW IMPEDANCE RECORDINGS LOZ-0013) in Athens with Anastasis Grivas, who does many mysterious things with a custom made guitar, and four extremely long examples of their melancholic, bleak droning hath been engraved hereon. Something nearly ‘metallic’ in feel exudes from the sound of track two, but after five minutes of listening you’ll admit that it is not metal of any known kind and must concede our two Greek philosophers may have discovered a new addition to the table of the elements.

Lovers of string ensemble music may enjoy Ring Of Fire (OTHER MINDS OM 1016-2), a compilation of performances by the Del Sol String Quartet. Subtitled Music of the Pacific Rim, it’s a showcase for 20th century compositions by composers from China, New Zealand, Korea, America and Australia. John Adams is the only name I recognise, so here is your chance to investigate the work of Kui Dong, Chinary Ung, Zhou Long and Peter Sculthorpe, among others. A generous full-colour booklet contains no end of explanatory notes and images.

It’s been a banner time for Häxan, the notorious 1922 witchcraft movie from Sweden that just won’t go away. It was released as a 2-DVD set last year, but before that it was continually being ‘rediscovered’ by cognoscenti of the underground set, partially due perhaps to the version with the William Burroughs narration. Mirror memorably did a live soundtrack of atmospherics for it in 2003 at the Kill Your Timid Notion festival. Now here be Bronnt Industries Kapital, with a 27-track soundtrack (STATIC CARAVAN VAN168) of creepy instrumentals and slightly demented music-box inspired pieces. Bronnt may or may not be one Guy Bartell, but his website keeps things deliberately rather obscure. From what I’ve skimmed so far of this disc, it’s refreshingly free from the clichés one might expect to accompany a witchcraft movie (for example, no back-pedaling into eerie wind effects or howling screeches), and in places even achieves a compelling and stately beauty. Limited pressing on this one. There’s an old engraving of a drowning witch, undergoing trial by ordeal, on the cover.

While we’re still on a fairly supernatural theme, you could dip one toe in the waters of Fantasma Parastasie (ALIEN8 RECORDINGS ALIENCD81), an instrumental extravaganza concocted by the team-up of Aidan Baker and Tim Hecker. The fine digipack cover unfolds to reveal another old engraving, this one depicting the arrival of two unwanted evil apparitions above a congregation of terrified and alarmed citizens. They’re seated in rows as though at church, but the somewhat suspect accoutrements among the furnishings (such as the enormous censers billowing evil smoke) make me wonder if this is actually some form of early Black Mass going horribly wrong. Baker (of Nadja fame) does his usual distorto-everything performance, but when it’s tempered with the crisp electronic work of fellow Canadian Tim Hecker it makes for a not unappealing combination of romantic, semi-melodic layered noise. The work is in six titled parts (including ‘Gallery of the invisible woman’), yet I have no idea why the CD is indexed in 66 continuous segments, some of them a mere 30 seconds in length.

Wicked Witch is nothing to do with sorcery, but turns out to be an ambitious young Afro-American performer named Richard Simms from Washington DC. On Chaos: 1978-86 (EM1080CD), we hear a compilation of his singles and album tracks (and remixes of same) originally released on Infinity Records at a time when he thought perhaps he could offer some serious competition to Prince and Michael Jackson. But as soon as you cue up the first cut, any resemblance to the afore-named acts ends abruptly. I have never heard such dark and horrifying workouts committed in the name of funk music, but outside of Funkadelic and Parliament it’s not really my area of familiarity. Even so this hypnotic and evil work, full of layers, whispered voices and obsessive loops, is bound to appeal to fans of the electric Miles Davis, especially with its slightly threatening edge encoded in track titles like ‘X Rated’ and ‘Electric War’. From Japan’s EM Records, home to many a forgotten eccentric from musical history, this weirdie lacks the usual informative booklet of notes but is packed with plenty of intriguing photographs.