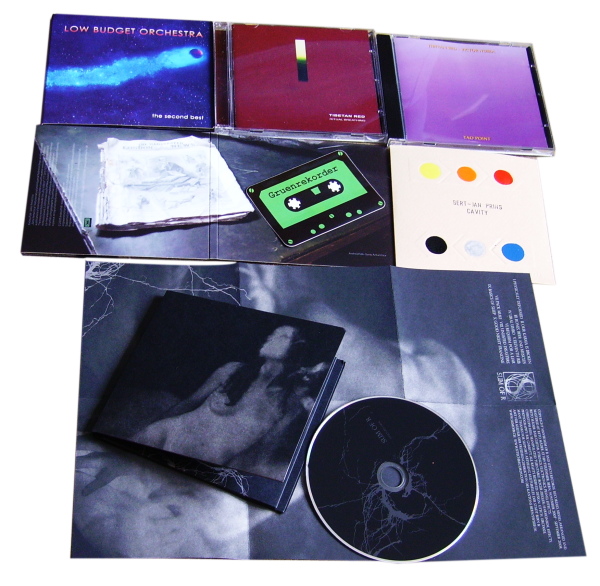 Sum of R is a side project of RM74, for which he is joined by two members of Herpes Ö DeLuxe – both of these are Swiss noise, drone and electro-acoustic projects which have managed to summon up and portray vast fields of unknowable, metaphysical murk in their slow-moving scapes of sludge. On their eponymous CD (UTECH RECORDS URCD025), Reto Mäder, Roger Ziegler and Christoph Hess use some conventional instrumentation (bass guitar, piano) alongside a turntable, a harmonium and lots of electronic studio effects to create ten substantial episodes of vaguely morbid, doomy and perplexing musics. Well not always doomy maybe, but always strange and compelling. Their ideas about layering and slowly-shifting dynamics could teach a few lessons to many of our American stoner-rock brethren! A fine record whose black digipack and grainy photographs printed with silver ink enhance the flinty atmosphere.

Tibetan Red is Salvador Francesch, who sent two new projects along with a very charming hand-written letter from his home in Spain. On Ritual Breathing (ANTAHKARANA RECORDS 108SFR408), his new solo record, he combines recordings of certain blown acoustic instruments (shenai, shakuhachi flutes) with field recordings of extraneous objects, such as an industrial blow torch and a blast furnace. Unlike his previous releases which have provided next-to-zero contextual information, this time he wanted to ‘make it easier with the liner notes’ which ‘explain the nature of the intent’. At 35 minutes, the title track is a monumental construct of slow, breathy droning that will have the cumulative effect of slowing your body’s metabolic rate in sympathy. ‘It was a sort of exorcism for me personally,’ reveals Salvador. Also sent: Tao Point (HRÖNIR NO NUMBER), a recent collaboration with Victor Nubla, whose solo exploits have always intrigued and delighted this listener. Tao Point is five tracks recorded in 2000, recorded in one week with a mobile portable studio; it’s a real exercise in subtle, understated power, and these stern and solemn drones will appeal to listeners who enjoy Mirror or Zoviet France, although they have much more weight and substance, and their multifarious layers unfold as though we’re exploring a jungle of the mind, discovering strange new species at every turn.

Low Budget Orchestra is Mikko Murangen, who sent a copy of The Second Best from his Helsinki home. An accomplished tour de force, this CD shows Mikko playing everything in sight and overdubbing himself into a guitar and synth orchestra across eight raucous and rocking tracks. Unlike a lot of ‘quirky’ music which often arrives here from Finland, the Low Budget Orchestra’s approach is extremely conventional and melodic – most of what he plays could have been recorded thirty years ago by any given late-prog rock instrumental combo. Even the cover looks like a lost Camel LP. Airless, hyperactive and slightly pompous – may appeal to fans of Zappa’s 1988 touring band.

Another fine burst of radical and powerful electronics from Gert-Jan Prins, one of Holland’s finest exports in that field. For Cavity (CAVITY CD 01), he’s gone back to his first solo release from 10 years ago, and reinvestigated how some of his home-made electronic instruments might sound and behave in today’s arena of toxic investment packages. The resultant blips were combined with his recent work with – wait for it – vacuum tubes. Oh, and some some timpani drums as well. In keeping with the intimate scale of the project, and the microscopic flickering sounds on the record, Cavity is a small-run hand-made release with covers hand painted and signed by the doughty Dutch denizen of DIY himself. A number of nonsensical text streams, which stand in for track titles, complete this package of ultra-minimal cleansing salts, which he describes as ‘a more cooled-down work in a niche of my own domain’. Hmm…a niche within a domain? You can’t get more hermetic than that!

To keep yourself focused on the unbearably cold weather we’re having, you might try listening to Andrea Polli‘s Sonic Antarctica (GRUENREKORDER GRUEN064). This quiet yet eventful CD of restrained digital ambience uses a combination of field recordings from that inhospitable realm of ice and frozen air, along with scientific data which has somehow been subjected to ‘sonification and audification’. I think these are fancy terms for retranslating digital information from one format into an audio format, but the results are disciplined and this piece of chilling sound art is not without interest. Also layered in are snippets of interviews with soft-spoken and well-meaning American scientists who presumably work in these barren wastes collecting the data in the first place. To complete the overall effect, may I suggest you read the short story ‘Old Papa Johnson’ by Robert Graves. Not a bad CD which is reminiscent of the wind recordings made by BJ Nilsen, except he’s more interested in disguising and transforming the results.