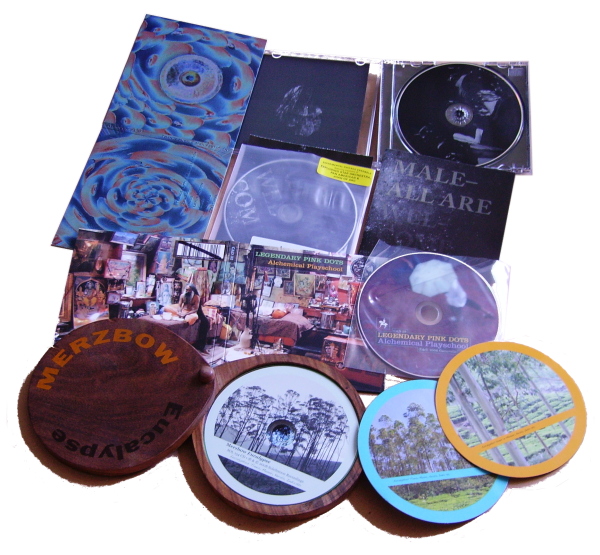 Couple of new devils roaring in from the Soleilmoon empire of strangely dark noises…Legendary Pink Dots released Alchemical Playschool (CAD 32) in October last year, an enterprise which we are told largely arose from a meeting between main Dot Edward Ka-Spel and Charles Powne, the Soleilmoon head cheese. Powne passed on a copy of his aural diary from India (also released on this label as Indian Soundscapes), and some of the sonic effulgences issuing from that continent did inspire Edward – and the other main Dot of Pinkness, Phil Knight – sufficiently to be poured into this colourful acid-fried studio concoction. Unlike many of the more user-friendly travelogue records of eastern realms, however, Legendary Pink Dots cannot help but transform all they touch into a gnarled array of mystical dreams, eerie poetry and slightly indigestible gut-wrenching drones. Yet there is also uncanny beauty in their very distinctive and well-crafted electronic work, even making the fragile and mannered vocal recits of Edward Ka-Spel (something which has always been a stumbling block for me personally with this long-standing kult band, I must admit) much more palatable. While owning up, I’ll also confess that I do find their work much more substantial and content-rich than that of the more well-known Nurse With Wound. If you missed the 2006 issue of this record (packaged in a soapstone box) or the 2007 incarnation as a double 10-inch vinyl slab, then this fine gatefold CD is for you. Buy it while you may!

Merzbow‘s Eucalypse (SOL 154 CD) comes packed in a wooden ‘engine’ or ‘device’, a circular box with a swivelling hinge making it resemble the sort of consumer product you used to see advertised in The Sunday Times in the 1970s, on offer from Habitat or some such. Of course Merzbow is as anti-consumerism as a man can be. With this box, he is not only continuing his notorious trend for eye-catching conceptual packages for his releases, he is also bolstering the geo-physical and political points he is making about the continuing destruction of forest life. Having dealt thoroughly with marine, bird and mammal life on recent releases, he turns now to the vegetable kingdom…the box is packed with circular cards printed in colour which inform us further about the rare species of Eucalyptus trees currently under threat, along with data about their place in the grand structure of ecoystems, thus making many a poignant observation on the delicacy of life itself. Even the word Eucalypse conflates tree’s name with word ‘apocalypse’, confirming Merzbow’s urgent view that this is, as always, an ‘all-or-nothing’ global issue with enormous consequences that we must face up to immediately. The complex and overpowering noise music was made with a combination of digital computer processing and rich analogue electronics and keyboards, producing one of the most intense sets I’ve yet heard from this ultra-prolific Japanese titan of extreme sound. Out since July 2008…1000 copies only!

Added at 19:21: correction…in fact the message of Eucalypse is not, as I suggest above, along the lines of saving the amazonian rainforests. On the contrary, the eucalyptus tree itself is the thing causing the damage to the ecosystem, due to its deep roots and ability to suck all the available water from the water table in order to survive. Seems these trees, much like the Giant Hogweed menace which Genesis warned us about, are pestilent weeds with no appreciable value to be harvested from their spindly vines. All that said, Merzbow’s musical statement is still worth hearing!

We noted an obscure but highly excellent CDR by Hearts Of Palm in issue 17; now this mysterious three-piece from Cincinnati in Ohio have returned with a new release called – wait for it – Trance Nipple Manifestation (NO LABEL CD). The American improvising avant-rock players have rethought their edgy, lo-fi approach for this outing and delivered noisy and intense versions of free-form psychedelic drone-outs that, on early spins, are matching any piece of unknown Krautrock or European doom-prog you might care to bring to my attention. Every other band these days can’t wait to namecheck records by everyone from Pink Floyd to Silver Apples, but Hearts Of Palm – without apparently even trying very hard – manage to deliver something much more credible in this area, and quite unselfconsciously. Quaintly naming themselves Spring Bass, Univox and Boss Taskam for this release, the trio insist they are an ‘organic, energistic, improvisatory entity’ yet also manage not to take themselves too seriously. No website; email heartsofpalm [at] earthlink [dot] net.

In not dissimilar vein, the Chicago improvising collective Male inform us that All Are Welcome (OTHER ELECTRICITIES OE016) on new release of this title. Photographs of the cosmos on sleeve indicate a possible interest in kosmische music or what used to be called ‘Space Rock’ in the 1990s, and may be meant as a reference to Sun Ra’s numerous dates and residencies in this famous American city. The core duo of Male (Jonathan Krohm and Ben Mjolsness) are supplemented for these one-take recordings with a large line-up of players, who use a combination of rock instruments (two electric guitars), tapework and jazz instrumentation such as vibes and cornet, to produce these cloud-cluster drones and ambitiously sprawling explorations. The results are mostly lacking in any tonal centre, yet over time they produce a pleasing effect. The combo includes members of Pan American, Joan Of Arc and Exploding Star Orchestra.

Ghastly jet-black noise continues to gush out of Vomir, the French lone wolf of harsh noise, on his new limited release Proanomie (AT WAR WITH FALSE NOISE NO NUMBER CD). The press release, like the music, speaks volumes when it refers to ‘sheer brutality’, ‘an ugly listen’ and ‘feeling of loss and depression afterwards’. Yes, it’s that last statement that incautious listeners should take note of, since wallowing for too long in the zones of nihilism can often-times lead to unexpected mental side-effects. The cover artworks appear to be all-black this time, until you look more closely to behold a shapeless silver blob on the front cover which is likely to be Vomir himself in his on-stage garb, which involves draping his head in a black plastic bin liner. How suffocating that must be for him…no less suffocating for us listeners, enduring his inhuman electric growls. Inside the tray is a picture of room left desolated by the destructive blastage wrought by Vomir, and a victim’s body (possibly that of Vomir himself) sprawled lifeless on the floor. The regular jewel case edition is 500 copies, but if you hasten to buy the ‘special edition’ of 100 copies, you get a bonus CDR of an additional hour of unacceptable ear-pummelling. All in all, it’s just another brick in the ‘mur bruitiste’!