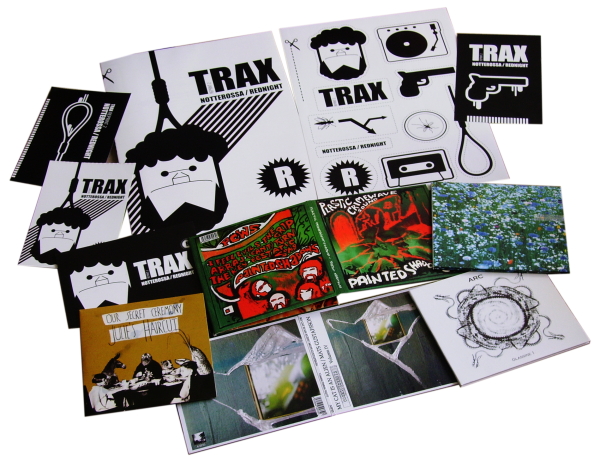 Italian record label A Silent Place specialises in producing picture disc LPs of underground music, presented as limited edition fine art objects, but they also release CDs. ARC is a side project of Aidan Baker (Nadja), where he plays restrained guitar music and percussion along with two other percussionists, Richard Baker and Christopher Kukiel. Their CD Glassine 1 (ASP22) is accordingly a very percussion-driven record, the trio making sounds like struck coke cans and underwater bottles to the accompaniment of sweet ambient droney chords. Italian player Fabio Orsi turns in Find Electronica (ASP21), three long pieces of quite “busy” and dynamic electronic work, sometimes leavened with a little acoustic guitar melody and heavily-disguised field recordings, resulting in much droning fed through filters which we can listen to as we contemplate the fields of flowers on his CD cover. “Reworked” by veteran experimental artist Gianluca Becuzzi, for more of whom see below…

Our Secret Ceremony propose a nice idea on the cover of Julie’s Haircut (ASP038), where two children wise beyond their years are sharing a meal with a cabal of intelligent animals – a mule, a walrus and a dog, plus a lobster who seems to be holding forth as he delivers a homily from the ocean bed with his claw raised. This double CD, divided into two suites labelled “Sermons” and “Liturgy” (songs and instrumentals respectively), contains a selection of electro-rock songs and tunes played in a very competent way with bass, drums, keyboards, flutes, and a rather languid electric guitar. It may not surprise readers to learn I found more to enjoy on the instrumental side, which comes across as late-Soft Machine filtered through drowsy cough syrup and played at 16rpm. My Cat Is An Alien‘s fourth Volume (ASP33) in their Cosmic Debris series of split projects sees them sharing aural space with Mats Gustafsson and his sax and electronics. Mats delivers a fairly good pulsing trance-piece which is only marred when he snaps out of the trance to indulge in a little hoarse yelling and throaty sax work, but he soon gets back into the zone. The My Catters use dampened guitar effects and angelic wailing voices to affirm their view that “Everything Burns like Cosmic Debris”; 24 minutes of melancholic music which is not unlike watching a meteor burn itself out in slow motion.

The large A4-sized item you see is Reprint 2 (SMALLVOICES SVR07026) by Trax, and it unfolds into a large poster with two CDs mounted inside (cleverly placed inside diagrammatic drawings of turntables), plus inserts including cut-outs. Haven’t had time to devour all the lengthy texts inside, but the first platter “Noterossa” seems an interesting construct; an hour-long cut up piece made from the samples of 34 international writers and authors, their speech and readings made into loops or distorted or just played straight, alongside some minimal avant-techno throbbing. A nifty piece of Burroughs-esque sound poetry results; Trax are a low-profile collective of artists, and this was originally released on a cassette in 1982. The second CD, “Rednight”, is a more recent construct by Gianluca Becuzzi, another artiste who is in thrall to William Burroughs as it turns out. The 41-minute construct of mysterious ambient sounds and field recordings, not quite as extreme as the voice CD but still of interest, is intended as a tribute to the American writer’s work.

Plastic Crimewave Sound are an American combo who always look good on paper, seeming to promise much in the way of truly “out” cosmic rock, yet always disappoint me slightly when I spin their grooves; I have a couple of their sprawling double LPs on Eclipse which to be honest I rarely revisit. On Painted Shadows (ASP30), they perform their tunes with thudding drums, electric guitars that can’t keep quiet, a madly whooping Moog, and multi-stacked choruses of echoed voices – all resulting in a deliriously “thick” sound where the message of the lyrics struggles to be heard through clouds of drug-enriched smoke and swirling LSD atmospheres. The sheer portentousness of the last 20-minute track is pretty staggering; like a bad dream of The Velvet Underground taking place in a basement party which you can’t escape from.