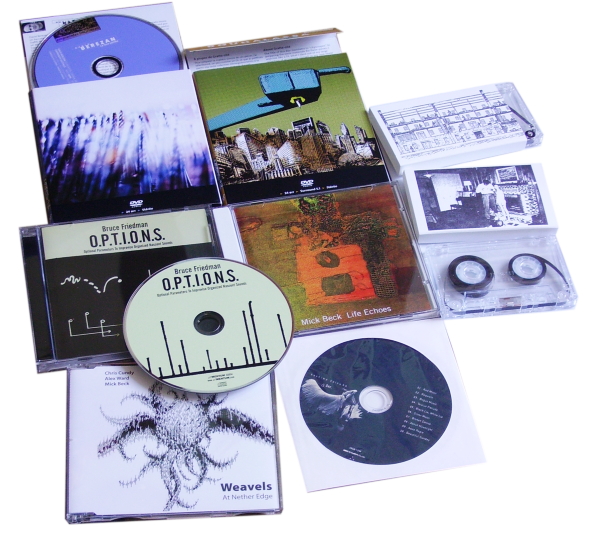 Got a couple of fine cassette tapes sent to us from Ben Scott of Richmond VA. As ting ting jahe, he has been represented by the winds measure recordings label in New York, an imprint for whose ultra-quite releases we have a lot of time. These tapes are self released, but bear the same distinctive letterpress packaging of winds measure, and both offer enchanting listening; his music has a baffling opacity that keeps drawing you back to it. libby tunnel (ttj cs 01) contains sounds so unobtrusive that they sometimes seem mere stains on the oxide of the tape itself; but listen intently, and a gentle throbbing sound appears to be wafting toward you on a cosmic breeze. The elaborate cover images suggest some sort of fugitive action from a military prison or other occupied zone. ending minutes, sinking (ttj cs 02) contains two 13-minute compositions, again both extremely minimal droning and pulse pieces, which are like ghostly disembodied memories of music reclaimed from a dream. The cover art for this one seems to depict a man assembling a mannequin inside his tasteful 1950s-styled den. Both these tingers are highly recommended; the cassette format does nothing to distract from his pristine music, and indeed a little bit of tape hiss and capstan rumble lends it a slightly more “organic” feel than the antiseptic perfection of a CD.

The Canadian label empreintes DIGITALes offers a couple of new releases from award-winning electro-acoustic composers, both pressed up as DVDs to offer the listener the choice of stereo or 5.1 surround-sound listening. French Canadian composer Ned Bouhalassa arranges cut-ups from his huge collection of field recordings on Gratte-cité (IMED 0895), and thereby fancies that he is “playing” entire cities the same way a DJ plays old vinyls dug from his crates. This conceit is reflected in the cover art, where an old-fashioned tonearm is poised menacingly above an imaginary collaged urban-scape and rendered with harsh colours and process dots, like the cover to some non-existent dystopian sci-fi novel. David Berezan was born and educated in Canada, but studied with Jonty Harrison in Birmingham and is now an established electro-acoustic Director at Manchester University. La face cachée (IMED 0896) refers to aspects of his semi-mystical working method, whereby he hopes to reveal “hidden spaces” through his tape-assemblage, thus arriving at the profound revelations of self-discovery.

Kashiwa Daisuke‘s 5 Dec (NOBLE RECORDS CXCA-1246) is the third release from this Japanese studio performer, who flings together guitar noise, disco drumbeats, insane synth melodies and sampled voices to very little effect, giving his compositions quasi-poetic names like ‘Red Moon’, ‘Aqua Regia’ and ‘About Moonlight’. Claims are made for his dynamic and original qualities, but I struggle to find anything original on these airless and joyless tracks; it’s impressive how he manages to be so vulgar and banal, often both at the same time.

On At Nether Edge (DISCUS 34CD), you can hear the assorted atonal free-improv whoops and bleats of UK players Chris Cundy, Alex Ward and Mick Beck, calling themselves Weavels for this outing. Alex Ward usually plays clarinet I think, but here he opts for amplified guitar work with a very slight avant-rock inflection, and leaves the woodwinds to Cundy, while Beck plays a very craggy-sounding bassoon. Each performer is allotted a solo cut to showcase their skills, but the CD really only works for me on the trio pieces – especially the farmyard-themed ‘Geese’ and ‘Sheep’ cuts. On the latter, they sound like a particularly worried flock of woolly bullies. If you enjoy the no-nonsense blowing of Mick Beck, you could do worse than invest in Life Echoes (DISCUS 36CD), a solo record whereon he picks up said bassoon and his more familiar tenor sax for a collection of short and lively cuts. The intention is to “explore the ever-fascinating boundary between conventional harmonies and looser playing”; I’m not quite sure what this means, but I sense there are more concessions being made to allow inroads for the non-initiate. He does plenty of noisy sucking effects and squeaking honks which will please those of an avant bent, but the occasional breaks into melodic forms (some of them rather greyly melancholic in tone) may help decrease the alienation factor for those listeners who shrink from jazz or free music. Most cuts come in at three minutes or less; almost an attempt at a pop record (in the same way that Trane’s Giant Steps is a pop record). If only it weren’t for the hideous sleeve; that combination of orange and ochre is nauseating.

Los Angeles-based composer Bruce Friedman has released O.P.T.I.O.N.S. (pfMENTUM CD054), featuring the massed talents of players such as Ellen Burr, Eric Share, Rich West and Lynn Johnston and others in what is termed an “electro-acoustic chamber ensemble”. Friedman himself plays trumpet, there’s the synth work of Emily Beezhold, plus the electric guitar of Jeremy Drake. Friedman works with processes to help guide musical improvisation, perhaps sharing some affinities with the methods of Butch Morris and his elaborate “conduction” strategies, or the ROVA Saxophone Quartet, who shape their improvisations by flashing colour-coded cards to each other as they perform. Friedman’s scores combine conventional music notation with original graphic elements, and the players use their skill and imagination to interpret these symbols as they may. The recordings are crisp and the highly able players are showcased well, yet I keep wishing the pieces would sometimes move into different modes, new rhythms, or tonal ranges; despite all the possibilities for freedom and invention, it feels like we keep bumping against a glass ceiling.