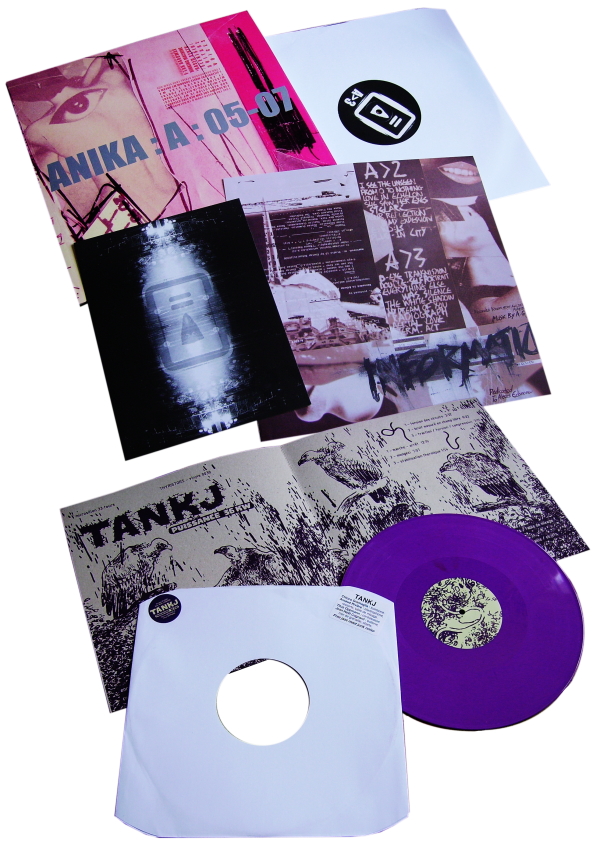 Great LP by TANKJ, a lively French group led by veteran drummer Jean-Noël Cognard; the combo play brass, upright bass and live electronics in an inventive set-up, producing much energetic noisy jazz. Indeed “Free jazz meets Junk Noise” is how they accurately describe their work. I find it very much in the great tradition of Jac Berrocal and the overlooked Algerian genius, Jean-Marc Foussat – the latter in particular made great use of the pneumatic drill alongside the analogue synth in his wild improvisation set-ups. Cognard has been trotting out his sticks since the 1970s and was a founder member of Yog Sothoth who made an RIO-styled chamber prog LP for the Cryonic label in 1984. I’m also partial to the electronics and mixing desk work of Titus Oppmann (his noise never dominates, and in fact the acoustic instruments usually prevail in the razor-sharp mix), but all the players are great; Chicco Gramaglia puffs his enjoyably impolite blurts from the bell of his trombone as if sending a fierce riposte to all enemies of freedom across the world. Pressed in pulsating purple vinyl as y’ can see, and wrapped in a handsome double-sided screenprinted hunk of cardboard decorated by Jörg Morning. LP title may or may not be Puissance 36kw (BLOC THYRISTORS 0030), and only 300 copies of it exist. May be purchased from our good friends Bimbo Tower in Paris.

Greek solo electronicist Anika arrives from Athens with an LP called A:05-07 (NO LABEL) which he released last year; it’s a decent collection of droney, menacing science-fiction music, quite heavy on the effects and the filters which often-times render every analogue note into gobbets of glistening glorp. As well as meandering in his Chrome-inspired keyboard mindscapes, he likes to deploy his editing tools in odd ways – cutting up and rearranging his own material, resulting sometimes in very clipped and abrupt endings for some pieces, while others exist as mere sketches or short fragments. Sometimes I wish certain tracks could be given more room, as they seem to fade out just at the moment when they’re getting interesting, but in principle I agree that the editing scissors can be a musician’s best friend, and I wish more artistes could emulate Anika’s discipline. The artworks, somewhat like the music, are packed with distorted and cut-up information, using collaged close-ups of photographs and texts to create alienating and futuristic effects.