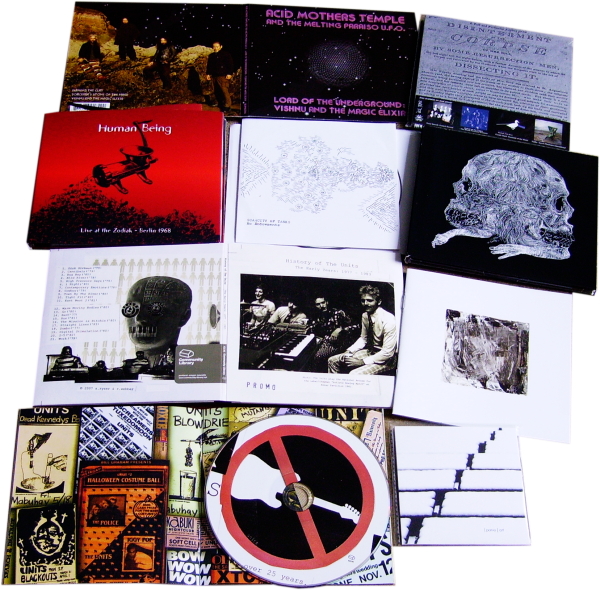 For a slice of synth-punk history that’ll knock spots off your Depeche Mode collection, why not tune in to this excellent new comp History Of The Units: The Early Years 1977-1983 (COMMUNITY LIBRARY CL16). This band were prominent in the San Francisco “scene” in the 1970s and are often mentioned in the same breath as The Screamers and Tuxedomoon, both of whom they shared live shows with. From what I’ve gleaned after a cursory listen, Units turn out to be slightly “poppier” than The more-abrasive and punky Screamers who I discovered some time last year thanks to a great 2-CD comp of their live work and early demos, but that isn’t to say Units aren’t equipped with requisite doses of restless, alienated energy and sneering humour. To flesh out the story, there’s a full-colour booklet inside which combines polemic and propaganda in prose with highly-charged collage images, deliberately pastiching the look of a late-1970s photocopied fanzine. Units made a passionate point about rejecting guitars in their music, and saw their gesture as something bordering on political – loaded with anti-capitalist meaning and anti-American rhetoric. Learn how they were hell-bent on assembling “a synth band that kicks ass”, and hear for yourself how successful they were. CD edition out 15 June (with a vinyl version coming soon).

Grisly noise gemstone of the week is awarded to Nate Young for his Regression (iDEAL RECORDINGS iDEAL076), a short but devastating collection of seven warpoid analogue electronic noise-globs, laced throughout with grim and anxious emotions and packaged with a double skull on the all-black cover (from which emerge the two helpless arms of a defeated human). The titles and unnaturally twisted sounds do everything that is humanly possible to emulate the effects of sickness, claustrophobia, and other unwelcome forms of bodily discomfort. A great solo statement from this Wolf Eyes founding member, one which really allows his most sickening aspects to shine forth without the distraction of over-amplified explosions and crashing metal noises from the other Wolfsters. Terrific digipack includes a small booklet of abstract paintings, likewise designed to induce nausea via the visual apertures.

No less desolate than Nate Young’s record, and an equally important part of musical history as Units, is Human Being‘s Live at the Zodiak Berlin 1968 (NEPENTHE MUSIC AMC 09008). Human Being’s membership included Hans-Joachim Roedelius, Boris Schaak, and many other performers all doing evil non-musical things at a particularly volatile time and place in European 20th-century history. (There’s a Conrad Schnitzler connection here too, as one of the co-founders of the Zodiak Club.) The counter-cultural significance of this objectional, Dadaist noise cannot be over-stressed. It’s the unacceptable face of German musical history, positing a much darker origin to all our beloved Krautrock music of the 1970s as opposed to the cheerful Kosmische image that is often projected. This important record can also be said to pre-figure and predict a good deal of so-called “industrial” music, which wouldn’t come to pass for another ten years. I haven’t even heard past the opening choruses of this single hour-long piece, but the dismal attenuated wailing combined with mechanical pounding noises is compelling, and the utter desolation of its tone is unmistakeable; I look forward to completing the whole experience, that I may be assaulted by further doses of heavy futility, angst and despair.

Japan’s finest neo-hippy pagans Acid Mothers Temple and The Melting Paraiso U.F.O. continue their project of borrowing heavily from the recorded past of progressive and psychedelic rock, rewiring it for a new generation of cosmic voyagers through their own highly skilled and intense playing. Lord of the Underground: Vishnu and The Magic Elixir (ALIEN8 RECORDINGS ALIEN8CD84) may not be so excessively crazy or unhinged as some of their earlier PSF records, but I prefer this more measured and disciplined side to their work; there’s more gravitas in both the playing and the recording. Indeed it’s the portentous sound of this well-made record that cannot fail to hook you in, with its delirious combination of old Hammond organs, valve-powered guitars and layers of wailing choral voices. Generous layers of over-dubbing fatten up the mix, much like their compadres Ghost have been doing lately with their lush jazz-inflected extravaganzas. In cover imagery and titles, we have numerous references to sorcerers and cosmic wizards of all stripe, and if swallowed whole, this record administers a dose of benign, tripped-out magic for your brain.

Scarcity of Tanks are a large combo of Cleveland loons delivering a great set of itchy power-rock and absurdist songs on No Endowments (TEXTILE RECORDS TCD21), a CD that’s heavily spiced with knowing post-punk references at every turn. One moment they’re striving to invoke that nerve-jangling slide-guitar sound from Pere Ubu (New Picnic Time-era), the next moment the two drummers are comparing notes on MX-80 Sound’s dark funkoid rhythms. With three or maybe four guitarists all competing for space, it’s no wonder this collection winds up resembling a brawl taking place in a crowded pub; full of angry shouts, waved fists, and brooding scowls as sleeves are rolled up and tattoos are bared. Weasel Walter produced and Devendra Banhart did the cover drawing for this musical punchfest.

In quieter vein, the three-inch CD [parvo] art (PARVO 007) contains seven lovely miniatures of music from the worlds of ambient electronics, quiet music, “lower-case” music and general friendly wispiness. The seven contributors, including porzellan, rim, shinkei, krzysytof orluk and the boats, are relative unknowns who were brought together for this modest project via the gift of online social networking. An intimate and charming collection, full of rather wistful nostalgic music.

Australian Lucas Abela is a larger-than-life performer and entrepreneur who has gained notoriety over the years for his uncomfortable live shows and the ultra-bizarre record label which he operates jointly with Swerve Harris. Performing under his Justice Yeldham alias in the group Rice Corpse, he improvises on the new CD Mrs Rice (DUAL PLOVER 666) by playing amplified sheets of glass, probably using his mouth and his hands in alarming and unexpected ways, alongside an impromptu rhythm section he happened to pick up in China during a recent tour in that country. What a musical find that turned out to be. Pianist Li Zenghui bashes the keys to generate a demented misinterpretation of the records of Cecil Taylor, or John Cale’s piano work on the first Velvets LP, while drummer Yang Yang from local band Mafeisan shows us exactly why he’s earned his reputation as the “craziest exponent” of percussion in the Beijing area. A thrilling record results. With this added accompaniment, I feel that Abela’s inchoate and formless noise has finally found a framework that gives it some real body and resonant presence, increasing its impact one-hundredfold. Needless to say with all that glass around, the sense of implied violence and bloodshed is never far away.