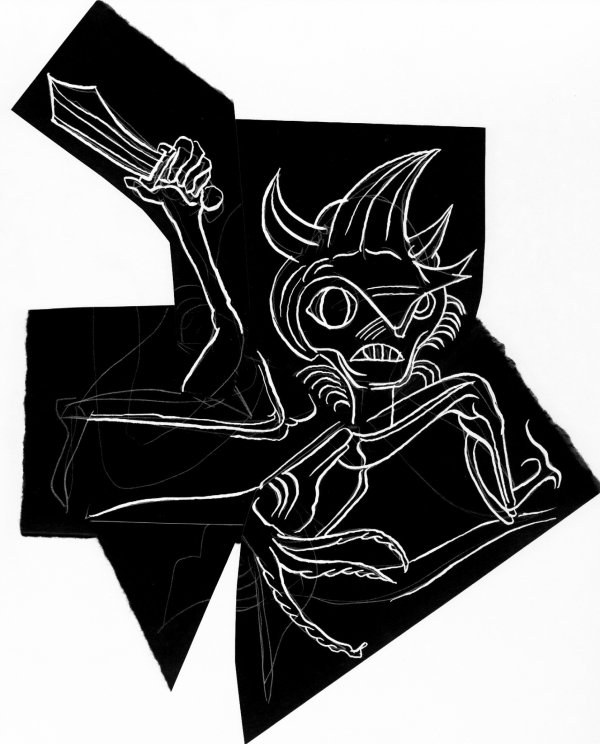 Brighton’s Adam Lygo continues to impress with abundant releases representing his unique strain of excessive, airless guitar noise. Each of these three new CDRs (released, I think, on his own Hivemusic label) continues his visual insistence on deploying the severe black-and-silver colour scheme, upping the ante on Keiji Haino’s aesthetic, while his beautiful-ugly guitar sound seems to be trying its best to emulate the hidden effects of mercury and liquid metals. Comparative Darkness is a set of live-improvised guitar loops, recorded direct to tape in 2007, with fanciful titles that allude to mazes, hidden rooms, and the meeting of metal with flesh. Intensive cyborg-music generated from sheer guitar mayhem, looping technology and ferocious amplification; even as he lets rip with the most aggressive sounds he can, there’s still something fundamentally neutered about the dry-humping effects here, as though a powerful snorting bull is attempting to slip its chains so it can wreak havoc in nearby village. Spine of jewel case contains a small plastic ant, in tribute to the poetic Dali-esque title of track five.

King Of Ravens arrives in a full-size case, containing two three-inch tiddlers which when spun proceed to sap your sanity and swathe your light in darkness over next 40 or so minutes. Lygo continues his nocturnal themes and creates strong impression of a mad guitarist who only plays outdoors at midnight under a full moon in November. Various winged lizards and birds of prey assist him in his diabolical rites. The first disc is utterly suffocating, a ghastly ride through sludgy swamps of greasy mire. Second disc is even more insufferable, making you long for the comparative calm of a tornado attack. I assume these are home recordings, or executed in a rehearsal space; my sense is that if Lygo was ever admitted to a professional recording studio, the engineer would need to be equipped with an oxygen mask and two well-filled tanks in order to survive the session. Packed in a die-cut sleeve with multiple artworks inserted like lithographs in a folio. Bones, shadows, wings and a taste for the supernatural haunt this record like malevolent spectres.

The Mirror’s Secrets pursues further this obsession with passing through the wall of the mirror, much like Orphée in the famed Jean Cocteau cinematic work, except that what Lygo invites us to find inside looking-glass world is far from comforting and leads to little hope of redemption. He sees the mirror as a repository of memories, a doorway to supernatural worlds beyond, and a fundamentally deceptive device; Dr John Dee, with his scrying of volcanic rock and his uncanny illusions that depended heavily on the use of reflecting surfaces, could have used these guitar loop workouts as soundtracks to his daily conversations with the angels (and Lygo to my mind completely trashes Coil’s work in this area). If only Blue Öyster Cult (similarly notable obsessives in their use of mirror imagery) could have found room to include vast swathes of avant-guitar noise as part of their catalogue of esoteric Heavy Metal alchemy, then Sandy Pearlman would have summoned Lygo to a recording session in New York City in short order. This release comes in a rounded-corner jewel case inserted with a sheet of shape-shifting plasma, making this a supernatural object of the highest degree. All these discs are highly recommended slabs of introverted, horrifying and relentless supernatural guitar noise!