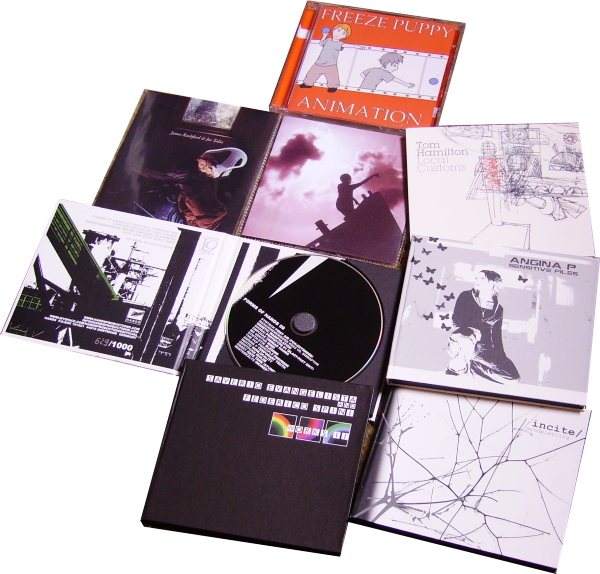 Four CDs arrived from the German Hands Productions label in Dortmund and some seem fairly promising. Long metallic drones (quite heavy) with occasional percussive blasts add a tinge of blackness to the listener’s day as he or she spins Works II (HANDS D129) by Saverio Evangelista and Federico Spini. Their single-minded approach makes me feel like a throbbing black beetle traveling slowly along a steel tunnel. incite/ offers a mix of music and video clips on mindpiercing (HANDS D132); incite/ is clearly going for something a lot more agitated than the Italians, and many of these lumpy tracks feel like old-fashioned techno music fed through a post-modern mincer, as highly unorthodox use is made of sequencers and filters to create squelchy abstractions. Still intriguing, while not quite as “mind-piercing” as the title promises. Angina P misfires for me, merely because her Sensitive Files (HANDS D133) is more conventionally rooted in dancefloor traditions (a bit like Jungle-lite with its hi-hats, digitised bass drums and looped vocals) which hold little appeal for this listener. Forms Of Hands 09 (HANDS D131) is this label’s compilation, organised on the event of a festival in April this year apparently held at a ‘Maschinehalle’, which I take to be a German factory floor or other converted industrial unit turned to entertainment purposes. Accordingly, many of the contributors opt for rattling out a thundering and thumpy species of percussive electronic music that has a few superficial affinities with 1980s Industrial Music, though there’s a fair amount of avant-Techno on here too. Contributors to this limited edition release include Syntech, Shorai, Empusae, MS Gentur, Synth-etik, The PCP Principle, Geistform, and Edgey; some of those names are highly descriptive of the sort of sounds they produce. All of these editions are produced to very high standards; more than CD digipaks, they’re like miniature hardbacked books, with all the artworks separately printed on good quality paper which has been pasted onto boards, while the CDs are mounted in press-moulded cardboard devices in a manner I’ve never seen before. Thanks to Nicola Bork, who does all the high-contrast graphic artworks for these releases, for sending them.

Freeze Puppy has an inventive set of “quirky” songs on Animation (PICKLED EGG RECORDS EGG 75), whose odd time-signatures and tricky melodies are executed with remarkable speed, elegance, and a high degree of polish. Tom Wilson writes, sings and performs almost everything, playing vast amounts of instruments by himself, sometimes aided by a small chamber ensemble of talented players. You can just about imagine this item rubbing shoulders with records from the wackier end of post-punk (such as The Native Hipsters, or even Family Fodder at a pinch), but you’ve rarely heard it delivered with such a clean, near-flawless production. Maybe technology has improved, maybe people are more talented these days. The breathless pace of this album (some songs less than two minutes in length) and the highly personal subject matter means that a few listens will be required before you can start to fathom out the strange twists and turns of Tom Wilson’s mind.

Annalogue is Ann Matthews, who recorded Brocken Spectre (ATOL RECORDS 006 LP) working solo in Anglesey. There she is climbing out on the roof under a sky filed with the purple clouds that abound in that part of Wales. This is an extremely fey collection of songs whose subject matter remains all but impenetrable on early spins, mainly due to the whispery nature of her vocals and the highly idiosyncratic recording method used to layer these wispy songs. Mostly acoustic, with pianos and guitars and gentle percussion built up into nimbus clouds of sound, doing everything possible to deflect the listener from normal modes of reception, linear thinking or anything else associated with boring old common sense. Instead, Matthews follows the logic of dream, and to very good effect for the most part. Recommend spending some time with this quasi-magical oddity and letting its strangeness work its way into your systems; Matthews is (I would say) a lot more successful at achieving the things for which the so-called “free folk” brigades of Norway are usually given unstinting praise. I’ve gotten a CDR promo, but this is a vinyl-only release which will probably vanish fast.

In Australia, James Rushford and Joe Talia have produced a decent slab of room-based percussive and droney minimalism in Palisades (SABBATICAL RECORDS SBB013), a record which displays a piece of white garden furniture on its cover. Rushford plays a prepared viola, while Talia busies himself with many unconventional objects deployed as percussion. The record label speaks of this as a “cavernous electroacoustic fabrication”, but don’t let that sort of nonsense put you off hearing this goodly recording. Unlike the sort of ultra-delicate minimalism we hear sometimes on the Winds Measure Recordings label, this duo favour something with a lot more substance, but their work is executed very slowly as if performed under conditions nearing heat exhaustion in a very hot sunlit room (which it possibly was). I think sometimes players of this sort get into a groove where they’re afraid to disturb the magic of the moment, hence feel disinclined to change what they’re doing. Some Australian major art-music players, including Plagne, Pateras and Fox, are thanked on the back cover of this limited 200-copy release.

Noted American minimalist Tom Hamilton takes a somewhat different approach on Local Customs (MUTABLE MUSIC MUTABLE 17533-2), where he works his electronic harmony generator alongside a chamber ensemble of players equipped with flute, clarinet, trombone, contrabass and percussion. Much more conspicuously composed than the Australian record above, Local Customs achieves its affects through careful alignment of long dissonant passages that don’t quite appear to relate to each other, yet neither do they draw attention to the mismatching processes that are taking place. The results keep the listener in a state of perpetual expectation, as potentially familiar sounding-instruments begin to lose their identity through swimming in fields of alienating currents. Hamilton is deploying techniques which he developed while on residency in Umbria a few years ago. Clearly, the scenery and atmospheres of Tuscany can do something to a man!