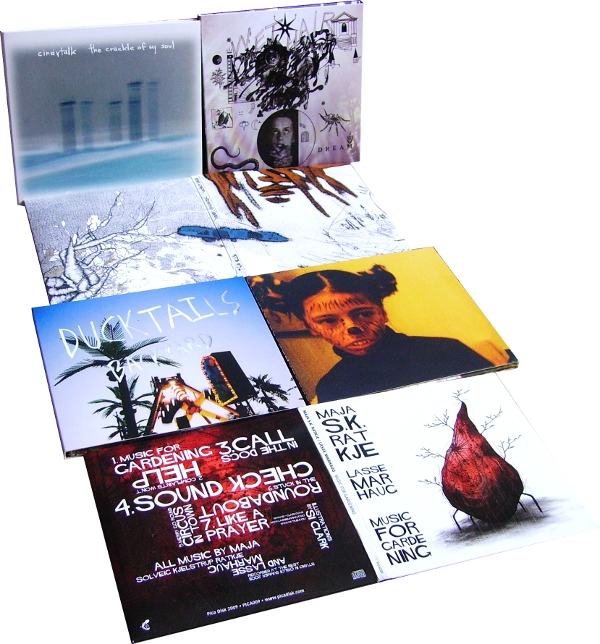 Our favourite Norwegians Lasse Marhaug and Maja Ratkje have unleashed another collaborative piece of ugly-ill-formed noise as Music For Gardening (PICA DISK PICA009). The very title and the presence of strange tuber-like objects on the cover, drawn with painterly flair by Si Clark, all suggest that certain organic and vegetative associations are appropriate for this stew of cut-ups, groans, chaotic eruptions and semi-mechanical looping rhythms. I found this a slightly messy and indigestible listen, but recognise at the same time it is full of invention, humour, absurdity, and a distinct lack of preciousness that is a welcome antidote to many over-manicured laptop releases.

I’m intrigued by Wooden Veil (DEKORDER 035), a Berlin art-combo who have a new release. With the plentiful colour photographs on this digipack release, they strive to give off the ‘tribal magic’ and ‘strange animal ritual’ vibe that appears to be so fashionable with other freakoid collectives such as Pocahaunted, Sunburned, or any group with Loren Chasse. While I’m not so keen on their wistful acoustical moments (the child-like singing voice on track three grates somewhat), these spacey loon-boons do manage some exciting moments of chaos when their percussion sections are given free rein; and their more ‘atmospheric’ pieces succeed in keeping the perceptive brain left-of-centre and in a state of permanent befuddled distraction.

Got a nice package from Release The Bats in Sweden, including some vinyl vraags which I can’t lay my hands on just now, but on CD here are three good examples of underground American gronk and grunch from marginal performers whose names are all new to me. The Ducktails CD I would recommend without any hesitation to fans of lo-fi, cassette bands, or anyone who just enjoys puzzling over the cryptic musical utterances of introverted loner geniuses. Backyard (RTB 48) is a compilation of tunes made by Matthew Mondanile which he released on assorted cassettes in 2007 (the title of one of them, 1992 Demo, may have given me the wrong impression as to original dates). Mostly recorded at home in Massachusetts and New Jersey, these 21 tracks stand out for their inspired use of distorted guitar effects, Casiotones and drum machines, producing daring and outlandish sounds that would never even have occurred to professional studio engineers. You may have to wade through a certain amount of noodly solos to get to the good bits, but it’s very worth while. The record also conveys a balmy, sunlit feeling which is a change from the sort of darkened, jet-black noise and morbidity I normally associate with this label.

Wet Hair are a duo from Iowa whose Dream (RTB 47) is a short half-hour workout with just four tracks of kosmische-inspired droning and electronic avant-rock, again making a virtue out of low-budget recording methods and making much use of distortion (especially for the vocal tracks). While we’re not exactly on the same wild turf of shattered insanity as Hospitals, or the stoned-out endless psych grooving of Wooden Shjips (what became of them?), this is immensely enjoyable work with plenty of fuzz organ, simplistic noisy droning, and mindless Faust-like beats. The sleeve is cluttered with a dazzling array of symbols, photos, drawings and collaged elements.

Heavy Winged are a guitar-drum-bass trio housed in various American states where the authorities can’t get to them while they perform their lengthy and excessive noise-doom rockfests, in which loud amplification and feedback play significant roles. Spreading Center (RTB 036) contains two very long 26-minute examples of their sprawling raggedy craft, full of retrograde metallic energy which is (in places) reminiscent of Yellow Swans, but also signals a return to more traditional rock coherence after the formless outpourings of Mouthus, much as we love them too. Looking forward to giving this bone-rattler a good airing at higher volumes; y’ get the feeling that once this trio get themselves into the zone, there’s no turning them off. To demonstrate their commitment to ancient forms of primitive rock, their cover images suggest fossils, skeletons, and cave art. Looks like we’ve already missed securing a copy of blacc lust, their 2007 CD on Three Lobed Recordings.

Cindytalk is one of many recent Editions Mego releases that persuades me this maverick label is being very pro-active in the area of expanding its own conceptual envelopes in surprising ways. This project is one man, Gordon Sharp, who has been active since 1982 but only recently pushed his musical thoughts down a digital computer-based avenue, not that you’d really know it from listening to the perplexing inhuman surfaces available on The Crackle Of My Soul (EDITIONS MEGO 097). It’s such slippery, flat and icy stuff that your ears are just baffled by its inscrutable countenance, yet we still face an abstract fourth-dimensional wall of incredible solidity, always ominous in its intent and slightly malicious too. These assured and stern cuts use their titles to allude to such knowns and unknowns as ghosts, buildings, shadows, the future, silence, and various forms of human desperation. ‘Debris of a Smile’ is one example of the latter, and ‘Signalling through the flames’ another; in its quietly determined way, this strange record will gradually push your brain out to the very limits of the ice floes.