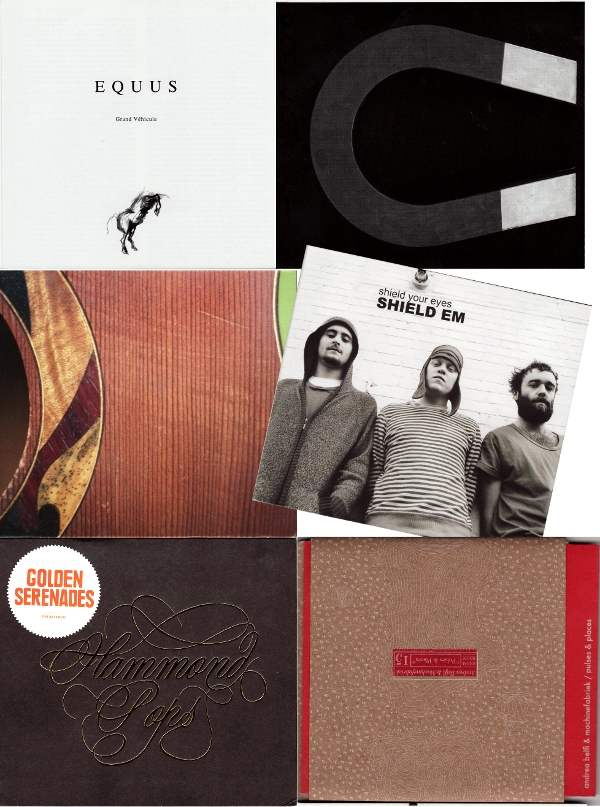 Most excellent noise from Norway by Golden Serenades, a project now ten years old featuring the great John Hegre of Jazzkammer fame (also Noxagt and Rehab, friend of Lasse Marhaug), Jorge Træen and Sigbjørn Apeland. On Hammond Pops (+3DB 005), they introduce a Hammond organ into their chaotic, destructive and ferociously roaring sonic atrocities, a noble keyboard instrument whose warm and distinctive tones are just about audible through tidal waves of obnoxious, unstoppable power-thuds and jackhammers. Musician readers will also know that an original Hammond organ is a very rare and collectible beast, highly prized in many circles, and they would probably be appalled if they knew the tortures that these insane Norwegians are inflicting on this endangered species. Not that Golden Serenades care – in 2007 they destroyed about $5000 worth of rare guitars, at a live performance sponsored with public money, which drew anguished cries of complaint from the establishment. When the squares wail that your music is some sort of affront to decency and good taste, you must be doing something right! CD digipack comes embossed with a title in gold, aping perhaps the presentation of a Klaus Wunderlich album, and likewise the ‘tasteful’ alpine scenery photo in the centre. Another strong release from this burgeoning label which mostly deals in abstruse jazz and improvisation from the Northerly regions.

Pulses and Places (KORM PLASTICS KP 3034) by contrast is an extremely quiet and subdued record of percussion, guitar and organ music, performed by the Italian composer and drummer Andrea Belfi with Machinefabriek (i.e. Rutger Zuyderveklt). This music mostly operates in a deliberately confined range of timbres, tones and rhythms, and comes across as a species of Pink Floyd-influenced avant-percussion progressive rock music, like ‘Set the Controls for the Heart of the Sun’ as if recorded by academic professors trying to prove something about the evil effects of modern rock music in 1970, doing it in a lecture hall where the walls are packed with mattresses. Number 15 in the highly coveted and beautifully packaged Brombron series, now curated by Frans de Waard.

Seattle guitarist Dave Knott now uses the back cover of his new album to mention his certificated status as a music therapist, based at Seattle Children’s Hospital and the Bailey-Boushay house. His music soothes and alleviates patients suffering from ‘medically related stress, anxiety and pain’, and Knott himself is deeply attuned to the patterns of breathing and body postures of those he treats. These 12 Sweet Little Guitar Ditties (NO NUMBER CD) may not be massively inventive as musical statements, but the record sounds amazing – recorded in vivid widescreen resonating glory by fellow Seattleites Rob Mills, Matt Shoemaker, and Eric Lanzillotta; and it’s been mastered by the great Scott Colburn. This process reveals all the detail of Knott’s assured and precise performances (not a single string buzz or fluffed note in earshot, as far as I can tell), and the lower-register nylon strings will reverberate your ribcage such that you too can enjoy the healing vibrations being fed directly to your heart, lungs and nervous system.

On Pogus Productions, we have another collaboration from Lionel Marchetti, this time working with Olivier Capparos, fellow French electro-acoustic composer. I’ve yet to hear Marchetti put a single foot wrong with his releases, and this Equus (Grand Véhicule) (POGUS 21052-2) is no exception. In 33 minutes, a wonderfully disorienting collection of muffled found voices, uncertain musical murmurs, sounds appearing from such a distance that you’d have thought it impossible to render them on disk, let alone capture them…all edited together in that strange, slightly nightmarish continuum that Marchetti has made all his own, suggesting a thousand and one narrative progressions and alternative scenarios. There are explanatory notes inserted, but they’re all written in French which I haven’t the energy to translate just now. What’s it about? There’s a headless rearing horse drawing on the cover, and inside a simple image of a magnet. One of the oddest things we’ve heard this week!

Shield Your Eyes are a London rock trio performing some outstanding frenetic guitar-bass-drum music on Shield Em (GRAVID HANDS GRVH003 / SADDAM HUSSEIN RECORDS JIZZ001) replete with harsh, shredded and desperate vocals from the anguished lead singer. Lest this lead you to expect an Angloid version of American mathrock, it’s actually much harder to pigeonhole their powered-up atonal guitar licks and insane time-signatures led by a drummer who’s doing his best to restrain his rubber-band arms and legs. Though they start off somewhere in the mode of The Stooges, they soon take a detour via post-punk abrasiveness and wild dynamics, only to slip into another side-road where sweet melodies, major-seventh chords and even introspective wistfulness are permitted. When they do all these things in the course of one single tune, it’s fairly staggering. Not since the glory days of Thin Lizzy have we heard such a successful combination of power metal with pop song. Fine work!