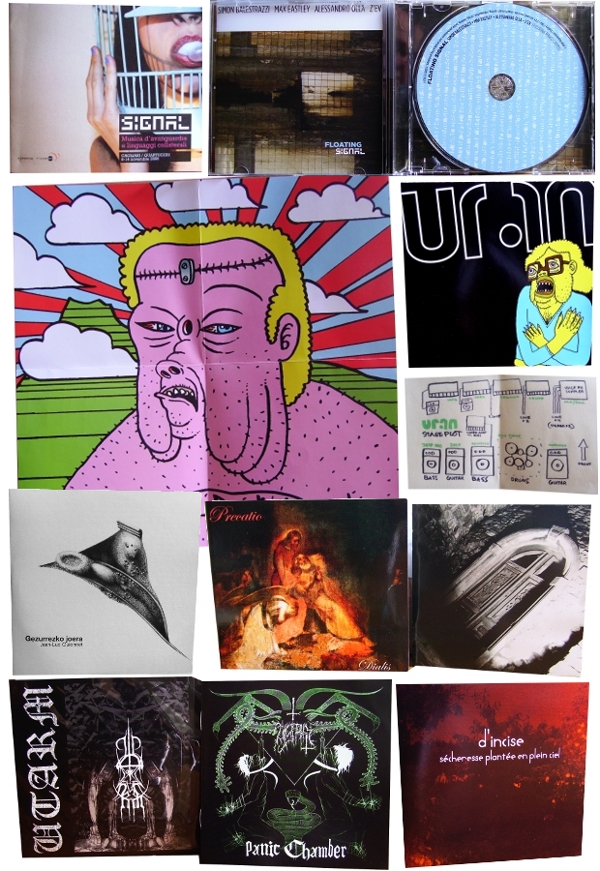 Floating Signal (TICONZERO TCZ012-1) sees the combined efforts of Simon Balestrazzi, Max Eastley, Alessandro Olla and Z’EV making much scrapey and exciting textural noise in various locations in Italy, including in the crypt of St Domenico Church in Cagliari. The two Italians are using laptops and amplified objects, while Eastley deploys his famous Arc (half-sculpture, half-instrument), Z’EV plays unamplified percussion and the guitarist Marco Cappelli plucks his strings on a coupla cuts. Its release coincided with an avant-garde music festival which took place in November in Cagliari, called Signal.

The Norwegian label Roggbif Records, run by Sten Ove Toft, used to deal in CDRs, but now he’s leapt forward into the world of proper CD pressings and printed covers with a couple of great new Utarm releases. The newie is Panic Chamber (ROGGBIF022), an astringent and terrifying blast of scary-atmosfearic Black Metal whose cover boasts alarming images of torture, snakes, and diabolic ritual, with plenty of screaming voices and agonised metallic guitar within. With titles like ‘Scratches in the coffin of human existence’, you’re guaranteed a bleak and painful listen with this grisloid abortion. Substitute of Dimention Hell (ROGGBIF023) is a reissue of this project’s CDR from 2006, described as ‘a desperate metal album’ and one which I recall fondly as an effectively harrowing portrait of existence in the Underworld. Buy both of these to give yourself a taste of eternal damnation!

Dialis are an Italian duo who play a kind of symphonic chamber-prog low-key jazz music on Precatio (NO NUMBER CD), sometimes adding vocals in the service of songs such as ‘A Fragile Rebirth’ and ‘A Sweet Eclipse’. These lyrical and poetical explorations all depict humans facing some sort of crisis and struggle in their lives, hopefully resolving their very personal dilemmas to some satisfaction. The release is bolstered with a booklet of monochrome photos showing details from churches, architecture and landscapes, presumably in and around their home of Montemiletto. Much effort and time has been poured into making this heartfelt release.

D’Incise has I think played with Diatribes, the didactic improvising combo from Switzerland, but here he be with a solo effort Sécheresse Plantée en Plein Ciel (GRUENREKORDER Gr 071). This is an interesting approach to field recordings, which allows the possibility of radical cut-ups and electronic treatments, to create a disorienting sonic portrait of everyday life in the Czech Republic and Poland. The murmured banalities of humankind are given an extra thrilling and slightly dangerous edge by these digital interpolations.

Austrian label Sulatron-Records, operated by the genial Dave Schmidt, doesn’t really deal in experimental music as such but his nouveau-prog releases often find a sympathetic ear in these quarters. Uran‘s self-titled CD (sulatron-records 0904) is an entertaining and slightly wackoid record of ‘electropunk spacerock instrumental’ music packed with nonsensical titles and cartoony images inside and outside the cover. Uran are from Gothenborg, but clearly do not operate in the same zones of introverted gloom-drone dark music such as we enjoy on the Fang Bomb label. Great rockist fun for prog and krautrock fans with plenty of analogue synth doodles to brighten your day.

From the Spanish label Audiolab-Arteleku we have Gezurrezko Joera (AUDIOLAB ERTZ 5), a great release of eccentric improvised minimal organ music played in the church of Altzate in Bera by the wonderful French performer, Jean-Luc Guionnet. We don’t hear enough from this talented fellow, whose Pentes CD for the label A Bruit Secret has long been a personal favourite. His approach to the organ is to treat it like a cross between a saxophone (his other instrument) and a mixing desk, using the stops and diapasons like filters and switches (which in one sense, they are). This single 43-minute performance takes a little while before it lifts off, but be assured it will reach stratospheric proportions in its quiet and unassuming way. The cover art (executed by Jean-Luc) is called ‘organ not organ’ and seems to find consonances between the church instrument and parts of the human anatomy. Recorded in 2008 as part of the ERTZ Other Music Festival, this one’s a certified beaut!