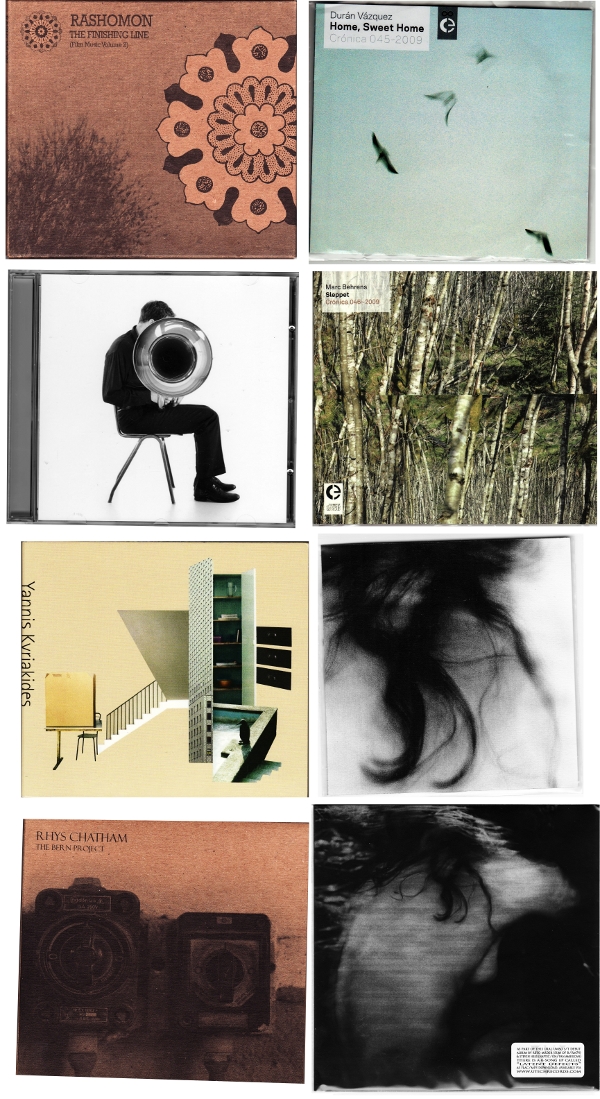 I seem to recall we have received something from Rashomon before, most likely the preceding release to this new one, The Finishing Line (Film Music Volume 2) (HINTERZIMMER RECORDS HINT 07). The highly talented Matt Thompson of Guapo plays and records everything, using very specific instrumentation and electro-acoustical methods to achieve musical effects and constructs which are deliberately intended as homages to cinema soundtrack composition. I think the previous release struck me as a bit too overpowering in ambition and in performance (combining movie music with energetic prog rock and other forms of art music), but with these stately, slow and graceful pieces he seems to have got the balance just perfect. A very accessible album, and one which will prove especially seductive to listeners who enjoy Jonny Trunk’s OST show on Resonance radio. What’s impressive is how Thompson stays on the right side of pastiche and kitsch, and works in passages of avant-garde dissonance to express the unsettling darker sides of his richly ambiguous themes.

Berlin-based tuba player Robin Hayward, member of Phosphor and a major contributor to the school of reduced improvisation, continues his extremely minimal and reduced playing on the solo release States Of Rushing (CHOOSE RECORDS HAYWARD), a sturdy and wiry record which is also evidence of his ongoing research into the acoustics of brass instruments. Only Axel Dörner has come close to matching Hayward’s austerity with these stripped-down experiments, making sounds which pose fundamental challenges to our conventional notions of “playing music”. This notion proposes that we as listeners simply pay close attention to the phenomenon of human breath moving around inside a big tube of metal. The simplicity of this may be reflected in the striking cover photo, which suggests Hayward’s very identity is becoming subsumed inside the vast gaping maw of copper. Also available as a vinyl LP. Which reminds me we recently received a fine Terry Fox LP from this label, which we must get around to noting.

Another hero of barely-existing music is the great Marc Behrens, whose Sleppet (CRÓNICA 046) began life in 2007 with a bunch of nature recordings made in Norway. Chris Watson, Steve Roden, Jana Winderen and other minimal-environmental geniuses were not far away from him at the time, and the record cover of this nature-worshipping release unfolds to reveal visual cut-ups of a silvery forest. So far, a few superficial skims by my dilatory lugs suggest that the familiar near-silent treatments of Behrens aren’t so much in evidence, but his editing scalpel is still as sharp as ever. These vivid recordings of seagulls, water, stones, sheep and glaciers have been spliced into carefully-planned linear sequences intended to reveal certain conceptual truths about nature. One thing folds into another, layering imaginary transparencies together to solve the enigmas of creation. Sleppet posits a severe and almost bleak view of wildlife, weather and the elements, a view so cold and unforgiving that you can almost imagine yourself wandering alone during the Mesozoic era when you spin this stark twig of a disk.

And if you enjoy field recordings, you can get Home, Sweet Home (CRÓNICA 045) as a free download from the above label. Duran Vázquez has assembled a dense collage of sounds captured in Vigo, a large coastal town in Galicia. His wide-open mic welcomes the rich chaos and noise of all things urban, something which Behrens has taken great pains to avoid in his clipped portrait of naturalistic details. Vázquez also has a habit of adding vague ambient drones to some of these collages and treatments, but myself I prefer it when he just hands us the raw material in an unadorned fashion.

A huge wodge of electro-acoustic chamber music composed by Cypriot modernist Yannis Kyriakides can be yours to own through purchase of Antichamber (UNSOUNDS 21U), a lavish two-disc digipacked affair spanning some thirteen years of work by the man and illuminated with detailed sleeve notes by the composer, plus an introduction by Bob Gilmore. I’ve tended to find myself baffled and alienated by this man’s complex work before, but for some reason I’m instantly attracted by the variety of approaches he uses on this survey. He freely combines his scores for conventional acoustic stringed instruments with such appurtenances as a record player, an electric guitar, a computer, sine waves, telegraph keys and and iPod shuffle. I realise that probably reads like a shopping list that you’d probably find in the paws of many players currently trailing round the circuit of avant-garde and new music festivals, but Yannis stands out here for the clear gravity and originality of his compositional and structural ideas. I suspect this will prove one of the more accessible releases by this challenging composer and I look forward to exploring these 10 long pieces in more detail. Note how the cover artwork suggests that we need to find new ways of considering what we want an architect to deliver when we commission him to design our home.

Very nice to hear the return of my favourite Swiss do-everything studio whizz Reto Mäder, here joining forces with Steven Hess from Pan American and Haptic to form Ural Umbo, makers of aural gumbo. Their debut release Ural Umbo (UTECH RECORDS URCD040) comes in a gorgeous monochrome package with photographic magic from the black-hair-loving Rik Garrett, who also produced a memorable artwork for Reto’s Sum of R project. As expected, these 9 dense studio cuts are amazingly heavy on atmosphere, tension, and an appetite for exploring the occult-diabolik underbelly of the universe. Indeed a track title like ‘Theme of the Paranormal Feedback’ should indicate to you the extent of their concerns with the exotic possibilities of noise, general spookiness, and the application of horror movie soundtracks. Worth comparing Ural Umbo’s thick and glutinous approach to said musical genre with the more skeletal concoctions of Rashomon above. For those with the stomach for a second helping, there’s also an accompanying six-track EP of remixed materials called Latent Defects (UR043).

Reto Mäder also adds an invaluable audio assist to The Bern Project (HINTERZIMMER RECORDS HINT 08), a fab new release by the American guitarist and composer Rhys Chatham, a man whose ambitious projects are often framed on a large scale and rarely fail to achieve anything less than luminous transcendence. He took his trumpet and electric axe to Switzerland in 2008 and had a very rewarding experience playing with three local musicians – a trombonist, bass guitarist and a drummer. Reto’s tape recorder never flagged for a second as it sucked up many hours of sessions from the enthused quartet. He then elected to listen through all the spools, scrutinising what he heard to carefully select the best portions for release on this disk. His hard work paid off; there’s not an ounce of fat or wasted space on these superb, assured performances, and every sound cuts through the air as crisply as a flat blade of ice. One of Chatham’s many skills is the way he consistently manages to deliver righteous blasts of heavitude and volume that would satisfy even the most jaded Slayer fan, yet still sounds as light and graceful as a soaring bird of prey at all times. Highly recommended!