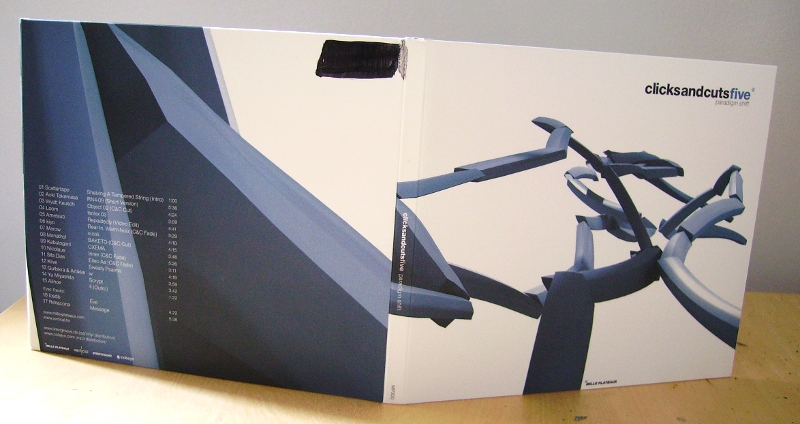 Got a great little box of powerful noise from Per Strom in Gothenburg, that Swedish burg that continues to act as a magnetic focal point for all that is righteous and heavy in the fields of nullifying, grisly-grey nouveau-industrial anti-music of blackness. As Barrikad, Strom blasts forth with three intense packets of nitro packed in unusual small formats, some of them informed by a hyper-critical attack-dog sensibility that demands the destruction of society at all possible levels. As we enter a two-year stretch of political and economic turmoil in this country, this laser-death heatnoise matches my pessimistic outlook perfectly. Daydreaming (L. WHITE RECORDS LW-055) is a collaborative 3-incher with Japmeister Government Alpha, depicts a strung-out and grey-skinned female creature on the cover, and it’s currently doing a great job of sand-blasting the pocked and uneven walls of my living room. Item with Japanese title and a menacing tot armed with steel pole on cover is Class War (XERXES ES58). Again, it’s a hefty dose of intolerable but very dynamic hell-racket that is strewn with sizzling electronic bravery and an unnerving use of distorted and/or screaming vocals. A varied listen in 20 mins; it even ends with a dark folk acoustic song enlisting the help of Apatheia. Lastly, Where There Was Fire – We Brought Gasoline (NIL BY MOUTH NBM18TAPE), where inside the agitprop-collage box we have a text by Gilles Dauve titled Critique of the Situationist International, and some heavy reverberations shuddering forth from a cassette whose titles make further allusions to the barricades of opposition on which we’ll soon find ourselves. The A side is a reading of a polemical text by a calm female voice taking place over an unlistenable barrage of ear-splitting nastiness. A very powerful and alarming reimagining of the Situationist crisis, this is worth comparing with Scott Foust’s more intellectualised approach to the same themes. This all arrived packed in a recycled box of Gemelli (a form of dried white pasta enriched with fibre) with the hand-inscribed NOISE♥ glyph on the front of the box – surely the safest way to get this subversive racket past HM Customs!

German clinicians of laptop surgery Mille Plateaux continue to showcase new and upcoming talents in the fields of experimental and minimal electronica on their label. The new Clicks and Cuts (MP300) compilation is subtitled Paradigm Shift and is the fifth in this series;17 contributors are named, all of them new to me, many with single-name aliases such as Scattertape, Loom, kiyo, Manathol, Alinoe, and Klive. Most of the contributions are plucked from extant or forthcoming releases, on the parent label, Ritornell, Force Intel, or Cluster. I could be wrong but I sense this “genre”, if indeed it ever was one, has become somewhat less glacial and desolate than it used to be in the mid to late 1990s, and there’s a lot of warmth and complexity spread across these highly-polished digital effusions. Personally I prefer the more abstracted and semi-noisy wayward offerings with their nonsensical structures and smeared sounds, and find my attention drifting away when the comp strays down the more conventionally ambient and chillout paths. I feel the same about Ametsub‘s The Nothings Of The North (MP301), on the same label. Apparently this young Japanese keyboard player was inspired by a trip to Iceland to create this rather unsurprising record of semi-ambient electro-pop, replete with not-quite-there melodies, heavily filtered digital sounds, and layers of crisp beats noodling away. But it does have a lot of surface sheen. Not on the same label, but handled by Mille Plateaux’s new distributors, is Audiokonstrukte‘s City Echoes (FÜRNI FUR001); this is in a similar vein to Ametsub but even more tuneful. It’s a record of untroubled and unchallenging airport-music from a skilled German producer; too tasteful for these ears.

Italian experimenter Andrea Borghi sent a couple of his projects, the solo CD Multiplicazioni (LISCA RECORDS LISCA 006) and Tropico (LISCA RECORDS LISCA 007) by VipCancro, which is a group effort. The solo record was made using an electric bass guitar and a laptop programme for manipulating sound, plus a nice collection of effects and pedals; refusing melody and form in favour of wandering about in a paranoid, vaguely depressive miasma of his own making, Borghi summons up a splendidly mean-spirited and introspective mood. Not quite in the realms of “noise”, but this textured and sluggish growlage sure as heck ain’t likely to be mistaken for ambient-chillout music, unless the listener uses it to accompany a sleepless night of mental indigestion. On the VipCancro affair, Borghi is joined by electronicst Alberto Picchi and the percussionist Filippo Cortelli, who also manipulates his devilish tapes dredged up from a diabolical zone. Cover artworks suggest these fellows live by the code of the fractal and the grid, following that relentless logic to a fatal conclusion. These six long tracks of throbbing, meandery gloom are every bit as deliciously torpid as the solo record, but the voice of Nicola Quiriconi does add a chilling touch of gothic miasma when it appears.

The amazing Tabata Mitsuru is mostly known to us from his team-ups with The Guilty Connector, but Mankind Spree (FOURTH DIMENSION FDCD075) is mostly a solo effort displaying his not inconsiderable skills with guitar, guitar synth, keyboards and synthesizers. He can make strange and unsettling abstracted noise-layered symphonies as easily as he can conjure up moving and melodic modern-psych masterpieces in the vein of Magical Power Mako. Aided by some fellow Japanese geniuses, among them the synth player Hiroshi Higashi (Acid Mothers Temple) on one track, and the percussionist Tatsuhisa Yamamoto on others. A fascinating and at times beautiful record, even if it feels a little self-indulgent and overlong in places.