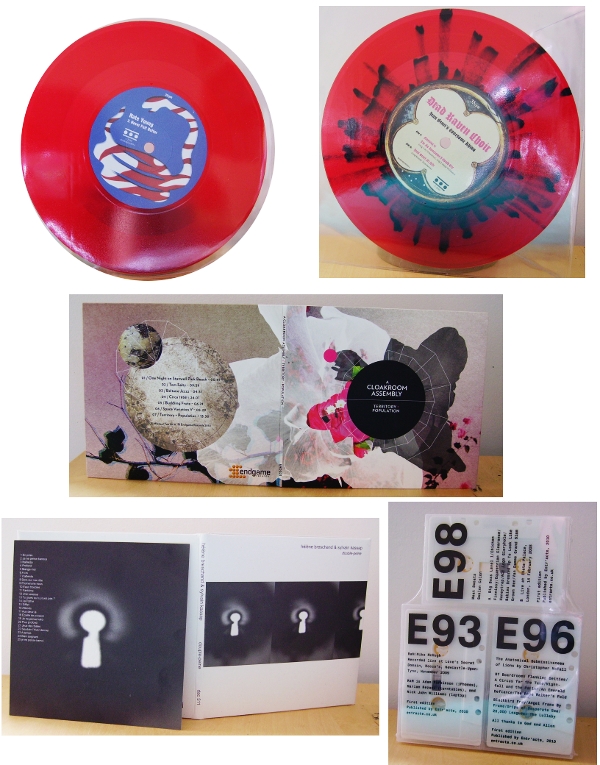 Michael Tee used to run the M Squared label in 1979, a home to many good things experimental and synth-based in Australia in the 1980s. A five-LP retrospective of that label’s endeavours was issued last year by Vinyl On Demand which probably hoovers up a lot of the good stuff from the time. As A Cloakroom Assembly, Michael now sends us Territory + Population (ENDGAME RECORDS END023), a full-length solo CD on which I assume he plays everything – electronics, synths, guitars, tape loops and drum machines. He’s proud of the “no sequencers” aspect to his craft, everything fits together beautifully, and the evidence on offer here reveals a skilled studio operator at work. Although this disc operates under the “ambient and soundscape” tags, the music here is very layered, full and eventful and quite some way from the clinical efficiency of the European schools. ‘Circa 1958’ buzzes contentedly away like a gigantic overfed wasp for 24 minutes, said insect welcoming you into its bloated world with its large mandibles. Tee, like BBC Four also claim, wants to offer us “room to think” and intends the music to stimulate our brain receptors in such ways as to open up space for new ideas.

From Hélène Breschand and Sylvain Kassap, we have Double-Peine (D’AUTRES CORDES RECORDS dac 311) which is a fascinating and opaque tour-de-force of bewildering mystery, combining weird muttered vocalising and whispering with disjunctive, free-ranging dissonant improvised noise. Breschand supplies the vocal elements, screening a miniature avant-garde movie inside her head and playing all the characters’ parts simultaneously, inventing all the dialogue for the benefit of the hard-bitten, supra-intellectual director whose steely glint behind his spectacles matches that of the early Jean-Luc Godard. Kassap uses electronics, toys, and clarinets to make passages of remarkably inventive music, each one appearing to be different to the last (no mean feat when you consider there are 25 tracks on this release), and packs a heavy amount of concentrated information into compacted two-minute energy pouches. (He does some of the vocalising too). One of the more avant releases from this fine French label, this is a a record full of precision and determination in the realisation of its fresh, vibrant ideas.

From Ireland, a couple of coloured vinyl seven-inchers on Paul Hegarty’s outstanding dotdotdotmusic label, an ever-reliable source of warped and wondrous noise music often presented as sumptuous vinyl editions. Dead Raven Choir produced Jean Genet’s Lonesome Rhino (dotdotdot010v), a three-track EP which belches out some of the most ghost-ridden, wasted, slow and obnoxious guitar punk rock you could ever hope to hear outside of that sector of Hades reserved exclusively for rock stars maudits. Astonishingly, these coarse and corruptive anthems of caustic horror all seem to have begun life as cover versions, including one of a Hank Williams song. Although there’s been a lot of post-modernist water under the bridge since The Residents released their all-time murderous butchery version of ‘Satisfaction’ by The Stones, Dead Raven Choir come close to capturing some of that same gloriously poisonous nihilism.

Nate Young‘s Half Full / Never Felt Better (dotdotdot009v) shows another development in the solo electronics work of this pivotal Wolf Eyes member. He uses the terrifyingly sinister creaky synths which we heard on last year’s Regression CD and turns them into a non-functioning musical backdrop for his uncanny vocalising on two songs of “brutally minimalist noise blues”. Imagine a reverse-version of Neil Young from another dimension, sans guitar and stumbling into your living room dressed in rags, infected with one of his foulest and most depressive moods, and so stricken by angst that he can barely remember how to phrase his own songs. Nate Young’s careless and apathetic vocal delivery creates just such a phantasmagoric apparition for you in real time; you’ve never heard a human soul so utterly resigned to his grisly and inhuman fate, and symbols of a coiled snake and fiery flames of Hell on the labels confirm the infernal caste of this desolate growler. Move fast if you wanna snag your copies of these 300-copy limited editions. All credit to the record company for clearly printing 33rpm on both labels here!

Pictured: three cassettes from the Entr’Acte label, not yet heard. They’re by RaM / Mike McHugh, Christopher McFall and Meat Sweats.