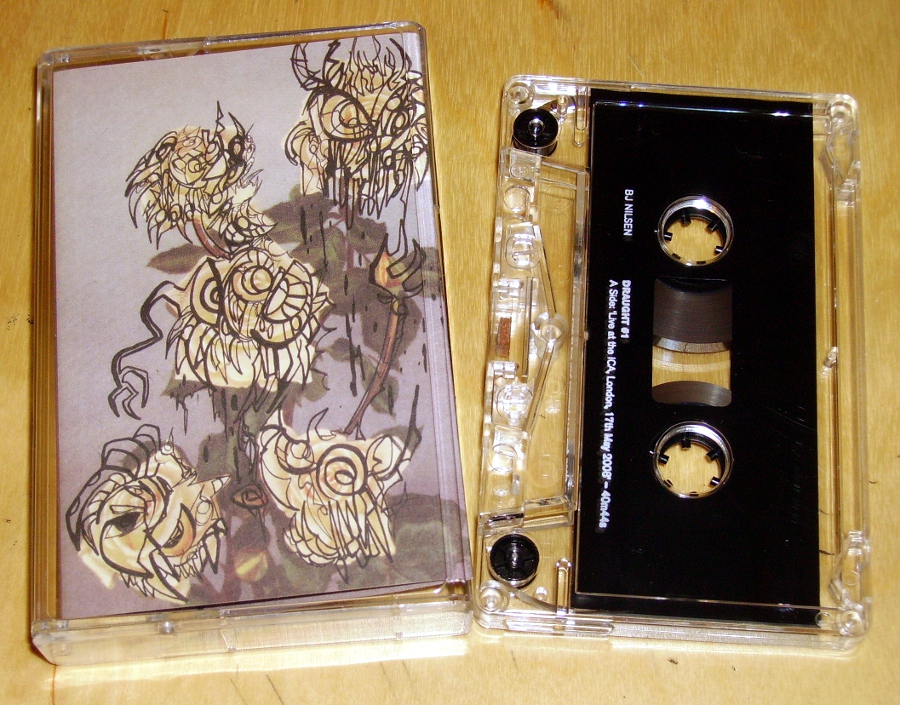 Cold, isn’t it? Now’s the time for some lovely warming cassettes which are the auditory equivalent of a hot casserole or soup, as opposed to the frigid sterility of an icy compact disc. From the Republic of Karelia in Russia we got these two tapes from Ivan and Anya released on their micro-label Full Of Nothing. In the gold carton we have Spirit Dance (FON 14) by gkfoes vjgoaf, a concoction of alphabet soup that conceals the name of Sean Conrad from the USA. Some fascinating and full-bodied instrumental music created with a lot of warmth and conviction here, and not a trace of any unpleasant industrial noise-factor. With his references to nature, mirrors, mountains and spirit guides, Conrad makes good on his claim to be “channelling” this music through certain unseen orifices, and the work exudes a solid spiritual candour.

Derek Rogers from Austin Texas produces two sides of baffling distorted experimental muffledom on Fifteen-Second Pauses (for Bill Shute) (FON 6), and uses his track titles to draw intellectual connections between map-making and the anatomy of the human eye. This opaque work does nothing to explain itself, and although we may be tempted to discern odd samples of records leaking through the cloudy and powerful energy-bursts and organ-drones on offer, on the whole this discordant and layered melangerie remains as insoluble as any given Chinese puzzle. Rogers is paying tribute to an old friend and music fan with whom his tastes overlap strongly, and he assisted with a spoken-word record by Shute on the Kendra Steiner Editions label (also run by Shute). Like the above, exists in an edition of 50 copies. Be sure to check out the website for more tasty sold-out items! Many thanks to Anya for sending these.

From Nathan McLaughlin in Minnesota we received a couple of pretty far-out cassettes of electronic noise experimentation numbered #2 and #3 in his Echolocation series. I’d be understating the case if I whispered of the “enigmatic” nature of these recordings; in quite short and compacted spaces, McLaughlin succeeds in tracing entire continents of doubt and fearful ambiguity. Derek Rogers above may allude to his map-making strategies, but if we applied similar lines of thought to these tapes, we’d soon be falling off the edge of a square world through following unknown latitudes to their logical conclusion. “Seek the internet for some beginning information about them,” is the creator’s advice in his enclosed letter. I see he’s about to begin a short tour this month of various locales in the US, and I suspect it would be worth visiting these events to see if he can sustain the same degree of purity and intensity on stage. Released by two different labels; Echolocation #2 (DIGITALIS #148) contains the short and varied episodic material, while Echolocation #3 (GIFT TAPES GT 029) proposes to step out into an arctic wilderness and just keep walking for as long as is humanly possible. Here be true “isolationism”, a condition many ambient murksters aspire to.

On Negentropy (NOTICE RECORDINGS NTR 006), the Chicago musician Travis Bird teams up with Daniel Burke, noted guardian of the Illusion Of Safety fortress, to produce a dual-guitar record of quite hideous intensity. The uninitiated traveller who sojourns at this particular dark mansion may mistake these eerie sounds for waves of treated feedback, but I think rather that we have something much more controlled and purified being delivered through this twin-neck axe assault. Determined to coax a ghastly plaint from the moaning mouths of their instruments, these two torturers set about their task with single-mindedness and clear focus, their hands working like the blades of oars as they keep the music on an even keel of unbalanced neurosis and mental pain. Some sustain and echo effects may be involved, but most of this tape’s power is down to the steely strength of the performance here; I never realised that Burke, who I’ve normally pegged as a creator of sinister static process-drone, had it in him. 50 copies, of which I’ve somehow been awarded #2. Great cover art by Laurie Peters, which depicts fossilised plants as part of an ancient scientific diagram used by the prehistoric astronauts to reverse time.

By contrast, the tape by BJ Nilsen is soothing almost to the point of invisibility. The A side of Draught #1 (ASH INTERNATIONAL ASH 9.1) is a document of a 40-minute live performance by this Touch recording artist captured at the ICA in 2008. Odd barks, whoops, creaks and groans which may be the cries of animals in the wild are suspended in a thin, electronic and tinkly drone. The tension is slowly increased with all the inevitability of a slow balloon ascent into the mouth of an upside-down dragon, and the performance gradually thickens and enriches like a saucepan of avant-garde gravy. Nilsen’s edited CD works are always fascinating journeys, but maybe he benefits from having a gigantic continuous 40-minute canvas on which to unfurl his own personal brand of maps. A vaguely similar mysterious trajectory is followed on the B side, a live recording made in Caen the same year, which does ultimately deliver a joyous fanfare of some sort after a long wander in the intangible zones of nebulosity. Savage Pencil provided the Dead Flowers cover art.