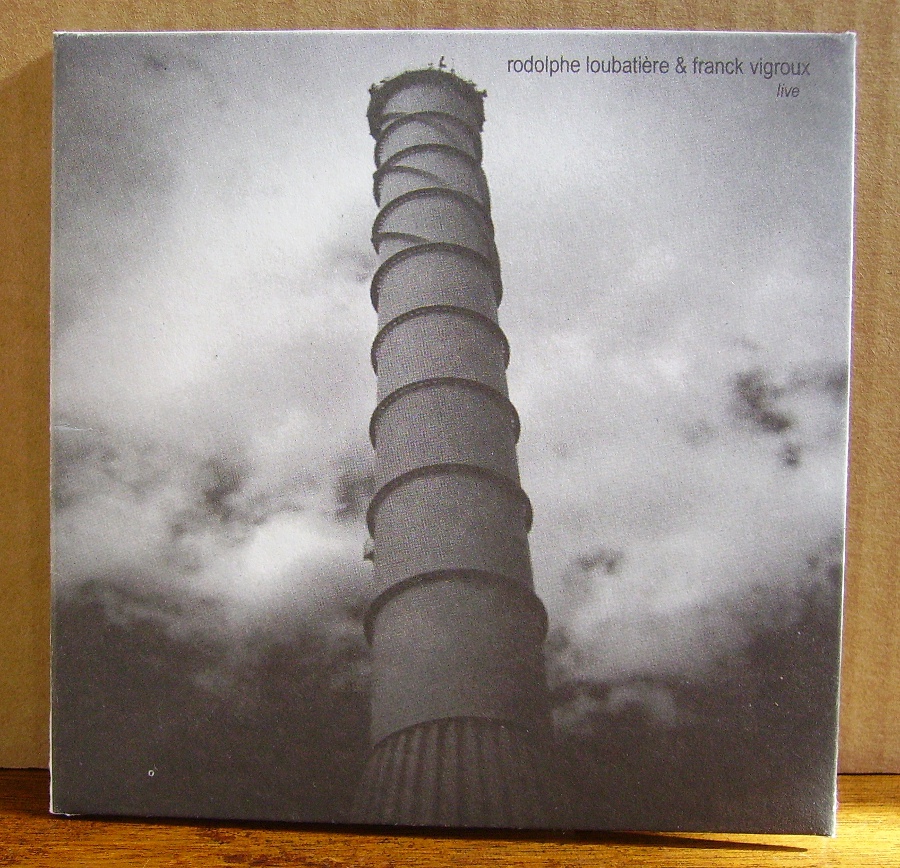 Another tasty French casserole from Franck Vigroux, a half-hour CD simply called Live (D’AUTRES CORDES RECORDS DAC 191) where he hammers his turntables mercilessly along with some spirited poundage from the drummer Rodolphe Loubatiére. Minimal this one ain’t; the pair are determined to fill just about all the available space with noisy and lively incident, virtually recreating every key album of avant-garde European prog-rock from Magma to Etron Fou Leloublanc. On this live set from a music fest in Geneva, Vigroux mines remarkable moments of energy and surprising sqwawkery from his record collection, while Loubatiére drives his drumkit like a custom racecar tearing around an illegal dirt-track. The photo of the tower on the front cover seems to assert their very imperialist aims; expect your corner of the world to be annexed in the next few months, if these two anarchists get their way.

Speaking of progressive rock, my initial impression of Tales of FiNiN (DISCUS 39CD) by Julie Tippetts and Martin Archer is that this multi-talented Sheffield player and his partner have finally got around to realising a “reimagined” version of Tales From Topographic Oceans. It’s a double-CD packed in a quite luscious triple-gatefold cover with a watercolour painting by Tippetts that could easily have appeared on any given LP of English or Celtic folk-rock in the 1970s. And yes, without a shadow of a doubt it’s a concept album of some sort, as one cursory glance at the song titles will indicate, with its numerous references to the topography and features of their imaginary world – Fininbrook, Finintor, Fininsridge, etc. Archer provides keyboard and woodwind backdrops to the vocal acrobatics of singer Tippetts, along with the help of talented players from the Discus repertory such as Chris Sharkey, Charlie Collins, Paul Schatzberger, UTT, James Archer, and others. Archer describes this project as “extended jazz and electronic song forms”, and states “we leave the listener to interpret the story”.

David Lumsdaine is an electro-acoustic composer whose work I am delighted to discover, and whether Big Meeting (NMC D171) is representative of his other compositional efforts or no, it’s a beautiful item and one to investigate with all speed. This Australian-born fellow moved to the UK in the 1950s, and among other things he met Peter Zinovieff in the 1960s and composed a couple of electronic works at the EMS Studio, now both sadly unattainable; and did some work at the BBC, making field recordings of London into a musique-concrète collage for a radio play called Babel. In 1970 he got a teaching chair at the University of Durham, where in 1971 he realised the present work, making use of location recordings of The Durham Miners’ Gala, locally called The Big Meeting. Effectively a “collage of voices, speeches, songs and brass bands” (a list to which I must add the beautiful sound of church bells), it’s quite a subdued, gentle and moving work, where even the liveliest moments of laughter and applause seem to have had half the animation sucked out of them. Ay, there’s a real valedictory ambience to these grainy, washed-out aural snapshots; given the fate that would befall the mining industry in the mid-1980s, it could almost be said to be a prescient piece of music-making. Lumsdaine’s electronic treatments of the sounds are not violent or wild, and his subtle tonalities betoken his profound sympathy with the people and the locations he recorded.

Vialka is the art-rock duo of Marylise Frecheville and Eric Boros, and La Poursuite De L’Excellence (VIA-008) is a great collection of animated music created mostly with just bass guitar and drums – a more refined and European take on the same set-up used by Lightning Bolt or Ruins. Plus they both sing (wrenching, barking and spitting their hurt vocal observations from closely-seamed throats) with all the passion of punk dayglo variants of traditionalist French Chanson practitioners. Bob Drake did the recording, and weirdly Vialka do sound in places a bit like The EC Nudes. Decorated with some flourishes of keyboard and brass, this is mostly a spartan-sounding record allowing the listener to concentrate on the stark urgency and precision of the duo’s edgy, paranoid playing; Frecheville in particular drums as though she was expecting a knock on the door from Interpol at any moment. I see from their site there’s a nice chunky vinyl edition of this available, too.

Labasheeda play some quite nice growly avant-rock on The Twilight State (PRESTO CHANGO RECORDS PCR 003-2); this Amsterdam band has the estimable Saskia van der Giessen as its lynchpin, and she delivers confident sweeps of the upper body whether playing guitar or violin, and her singing voice is characterised by a clipped, world-weary tone as if she’s daring all the men in the room to try and impress her. Judging by the action-shot of her playing the violin here, she’s certainly no string-bean and you wouldn’t want to take her on in an arm-wrestling competition. From the cover, I’d half-expected another dreary slice of ambient murkiness, but this is an album of taut and muscular stripped-down no-nonsense rock songs that you’d happily file alongside your 1980 LPs on Homestead and SST.

Opera Box (SPRAYPLASTIC SP-5595) is a nice metallic surprise from Singapore, slipped inside a pink envelope – perhaps this is the traditional Asian way of expressing a friendly greeting to a music lover. Little friendliness found in the contents when I popped open this DVD slim box, though. Awk Wah recorded this CDR item which starts out as shapeless gritty noise but gradually resolves itself into a percussion album of sprawling thrash. Shark Fung is the player here, who also plays in Amino Acid Orchestra, and though it’s a solo record we seem to hear some detuned guitar feedback and thrumbs accompanying his monotonous and futile beats; mayhap he’s kicking a guitar-amp set-up with his free foot while the other one trips the bass drum. While there may not be a great deal of fire or attack in Shark’s arm and foot movements, he does succeed in creating an overall texture of unpleasant grittiness, metallic scrape and unpatterned rhythms that succeeds perfectly for me; it conveys a real sense of defeat and claustrophobia, like a bound man sewed up in a mailsack trying to wriggle free with nothing more than a small nail file to make his escape. “It seems as real as now,” is the metaphysical utterance printed on the back.