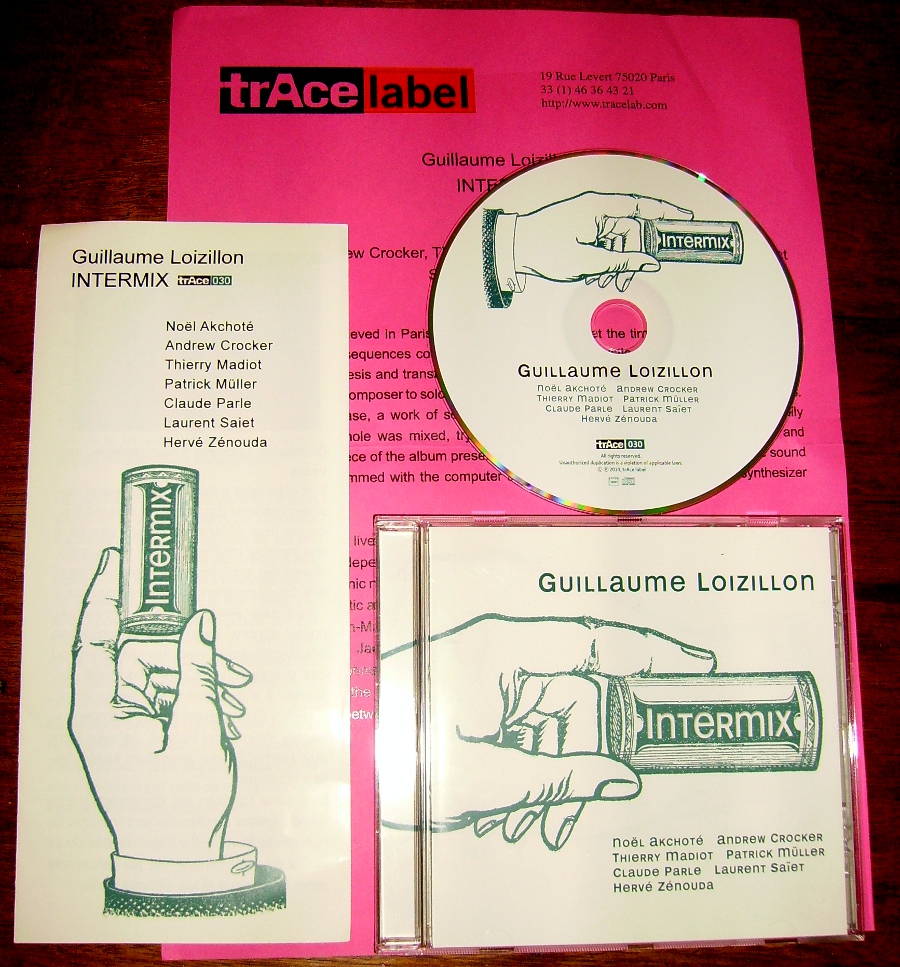 Intermix (TRACE LABEL 030) is a musical endeavour that’s been instigated by the Paris-based composer Guillaume Loizillon, and each of the eight tracks here represents some form of interactive work with a clutch of talented solo players, musicians and improvisers, with the redoubtable Loizillon tackling them one or two at a time. Their instrumental contributions are reworked, edited and processed in evil electro-acoustic fashion, in an attempt to merge two divergent sounding worlds and create “a meeting between two colours of electronic sound”. Various impossible feats abound, such as the hyperactive prancing-hare motifs on ‘Figures Actives’ which uses the trumpet of Andrew Crocker and the percussion of Hérve Zénouda to dazzling effect. On ‘Double Sens’, the trombone of Thierry Madiot has been subjected to even more intensive transformations and might as well be something emanating from the famous catacombs of the City Of Light, and the same can be said for ‘Corridors’ where Claude Parle submits his accordion to “the treatment”, resulting in some 7 minutes of gloriously menacing drone, tinkle, and miasmic swathes of silk from which the occasional recognisable segment of fingerwork and box-squeezing might sometimes emerge like a diffident Harlequin stepping out from the wings. Loizillon takes the approach of the classic French chef who may have studied under Escoffier, allowing only the choicest base ingredients to enter his copper saucepans, and the dishes he serves up are highly digestible and tasty concoctions, digital updates on the French school of musique concrète. The last track is a real pousse-cafe treat for fans of vintage analogue synth, with Patrick Müller manacled onto his VCS3 gradually descending into a chaotic whirlpool of constrained madness.

Squim (Chris Phillips of Portland, USA) made a nice piece of surly lo-fi noise for the Debacle Records label in Seattle last year which was quite a constipated snake of twisted burlap, but Nazarearu (DEBACLE RECORDS DBL033) appeared to me initially a little more subdued and less violent on the surface. Keep playing though and you’ll find that Squim is certainly not out to win new friends with this obsessive, formless brand of gravel-squelching abstract noise, which grumbles its way ceaselessly across unfamiliar streets by night, selecting choice rats and other vermin to stuff in its leather sack. Fabulous luxury foldout colour artworks on this release, yet their pristine symmetric patterns and attractive landscapes seem somewhat at odds with the determinedly non-patterned sounds within.

Another lovely record by TSP faves Zanzibar Snails, the improvising combo from Texas with their increasingly fluid line-up; for Caveat Emperor (IKUISUUS IKU-027), the core team of Nevada Hill and Michael Chamy are joined by David Lee Price, Jay Jernigan, Sarah Alexander and many others, adding their distinctive voices to the creaky and groany improvised morasses and marshlands. As ever, these snails crawl slowly but inexorably towards their chosen goals, and unfailingly leave behind a thick smear of green luminescent slime for us consumers to lick up with our grateful tongues. I’ve never heard from a moment of music from the Zanzsters that doesn’t appear to be smitten with an abiding sense of unease or claustrophobia, and this release ticks most of the “airless Hell” boxes that are required by State Law for this genre of music, but there’s more variety than usual thanks in part to the other contributors; the massed blabbering voices of the sick and the insane on ‘Pregnant With Martyrs’ are particularly fine. On a Finnish small press label, this is the first item I’ve come across not released on their own Mayyrh label, but it still carries the tactile screenprinted cover, this one featuring alien geographic features rendered as half-tone blobs of sickly-coloured monstrousness. Each panel appears to present a new human tongue obscenely penetrating parts of the landscape they should not enter…recommended.

Very encouraging to see that Korperschwache, the insane Texan duo of RKF and Doktor Omega, have recently gotten a release on Crucial Blast – perhaps something of a step up from their previous limited-press CDRs. We’ve been much impressed (and amused) since 2007 by their faintly tongue-in-cheek releases for Public Guilt and Inam Records, which sometimes felt like send-ups of the extreme Black Metal and Doom genres. Evil Walks (CBR88) is certainly nothing to be ashamed of, but where is the smothering aural excess and hilarious bombast I used to love so well? It feels as though they’ve toned things down a notch or smoothed out some of their earlier eccentricities, perhaps in a bid to make this more of a “proper” record. Don’t be put off investigating though, as they can still deliver a matchless and merciless punch from their loud and unpleasant barrages of body-blow guitar feedback and drumbeats, with the requisite snarled vocals fed through about 18 walls of distortion, echo and studio transformations that would have made Teo Macero raise his eyebrows a few degrees. There’s also some found voice tapes that are used to add more narrative fuel to the central “theme” of this album, whose subtext is that it promises many journeys by foot into forbidden places and stories which are almost always guaranteed to end in fire, blood, flames, painful torture and horrible murder. All the song lyrics are printed in full and illustrated in the foldout, and of course there’s the grisly cover art drawn by Nicole M. Boitos with its overwrought linework depicting a feral (and extremely fat) feline devouring a woodland creature, the latter detail sadly obscured by the cropping on the front cover. Her depiction of the gnarled trees is highly effective, delivering a new angle on the old motif of “nightmarish forests” where twisted trunks turn into ugly human faces.