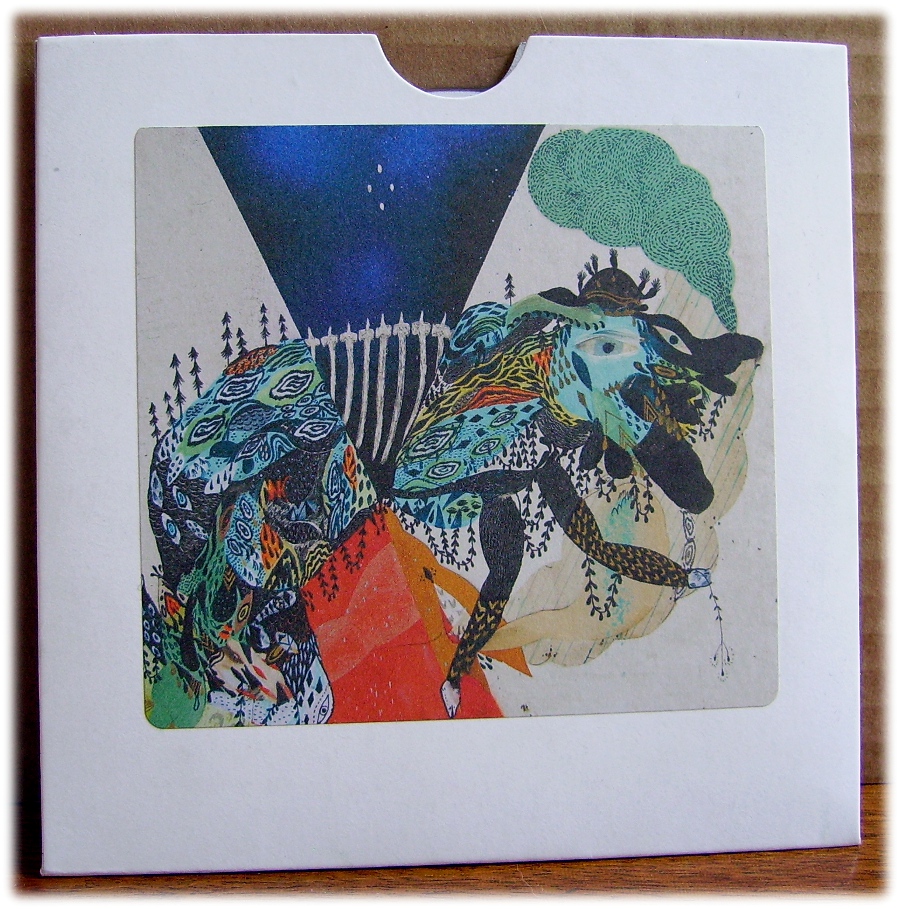 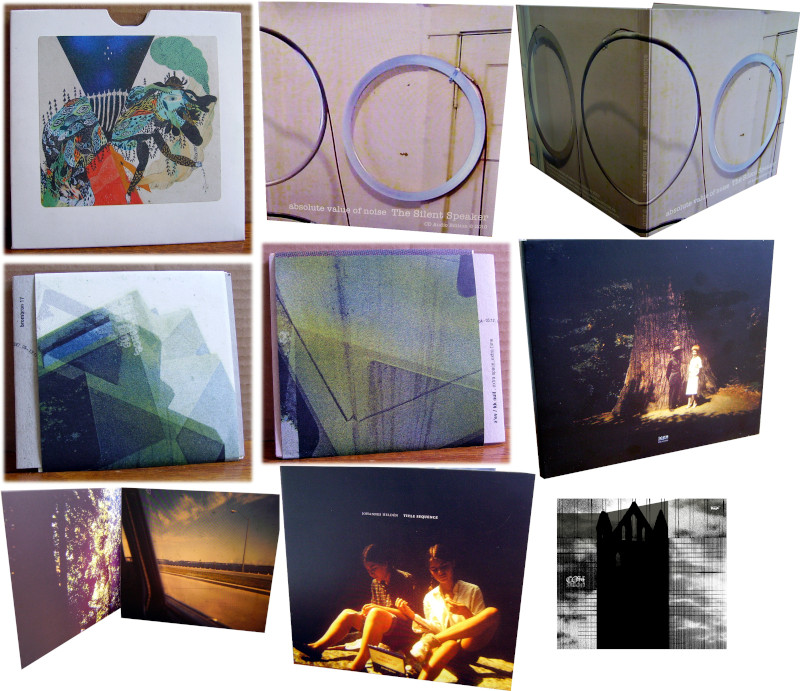 From the Canadian artist Absolute Value of Noise, we have an audio version of a gallery sound-art installation he did called The Silent Speaker. This is an intriguing array of fractured texts and fragmented narratives, pitched by the speaking voices of Glenn Skene and Lori Weidenhammer, making their utterances and readings against erratic bursts of electronic white noise, humming amplifiers, and static – all of which appears to be generated by a clever radio transmitter-receiver setup. The texts and underlying concepts are drawn from stories by Philip K. Dick, Fritz Leiber and F. Scott Fitzgerald, all of them united by the strange possibility of living backwards. Through these means, the creator perhaps hopes to cause a violent disruption in the fabric of continuity. Sonically, his electronic noise may not be quite as violent as his avowed influences Merzbow or The Haters, but it still has much meat, malevolence and very physical presence; at times the reverso-energy of his secret radio waves appears dangerously serene and still, lulling us into a false sense of security.

Quite nice lyrical and dreamy ambient textures from Swedish poet and sound-artist Johannes Heldén on Title Sequence (IDEAL RECORDINGS IDEAL080), on a release which uses many fine photographs by Birgitta Heldén to evoke forgotten memories of families, places, and travel. By no means as conventionally “dark” as some of the music to have reached us from Sweden of late, Heldén’s music uses structures that are so unobtrusive as to be almost invisible, and dynamic developments that evolve at about the same rate as cloud formations on a windless day in the Autumn. There’s a slight risk that some of his highly-processed and synthesized sounds may be a bit over-familiar on the ear, but this risk soon evaporates when his gaseous nebulae gather enough momentum to take off like a helium-filled object and dangle threads of enchantment over the heads of many. The general dreamy caste of the album is deceptive, as things could turn surreal and weird at any moment.

Ivan Pavlov performs as CoH, producing a tremendous guitar record called IIRON (EDITIONS MEGO 114) (a follow-up to his LP IRON of some eleven years ago). This Soviet composer moved to Sweden in 1995, and has a discography stretching back to 1998 that requires immediate investigation. Brilliantly-executed instrumental compositions using electric and acoustic guitars, but also electronic beats, drones and noise and some ingenious recording strategies that sometimes bleed the fleshy excess from his set-up until only a metallic skeleton remains standing. Each piece is almost like heavy metal rock music, yet it isn’t; it’s both more simple and more complex in the same breath. Stark, irresistible, ingenuity from this gifted creator who in his time has had some associations with members of Coil and Throbbing Gristle.

Over the last couple years we witnessed a small rash of London guitar groups with some impressive debut releases such as Shield Your Eyes and Nitkowski. Poino are also an avant-rock trio from South London and Moan Loose (HORSE ARM RECORDS HAR CD01) was released just at the end of last year. All their constrained energy is force-fed through the conventional guitar-bass-drum setup and emerges as something bitty, angry, and flighty; like some sort of multi-dimensional road digger that, Transformer-like, grows mighty fists, feet or other weapons as needed, to demolish any opposition. Like Shield Your Eyes, Poino are very accomplished at doing the weird-dynamic thing, changing time signatures and erupting into unexpected batterings of shouty blat, then reining in their collective steeds and resuming a steady canter for 16 bars. Their produced sound is stripped-down, no-overdub garage mode, and delivers a solid thwack to the chin every two minutes. The singing voice is the only slight problem for me; he can’t seem to modulate his way out of the pained screaming mode, and the lyrical content (there’s plenty of it) comes out mangled. It’s like being hectored by a drunken loon at Speaker’s Corner for 45 mins, where not a single phrase makes any sense. Nonetheless, some exciting and rough music lifts off these grooves.

The mighty Z’EV continues his long association with the Japanese heavy-hitter KK Null on Extra Space, Extra Time (BROMBRON 17). 6 tracks of extremely exciting and maximal music, Null’s thrilling and inventive combinations of electronic music played in numerous modes along with Z’EV’s magickal percussive actions. Seasoned professionals both; every second of this lean, sinewy music just exudes assurance and deliberation. Null is in full control of a considerable range of various effects, not one of which is tainted by the curse of over-familiarity, and he seems to be hard-coding his own personality into the very circuits of his devices. Every note of music is stamped with his remorseless attack, even when creating non-noisy ambient musical bursts. Null creates sequenced rhythms and patterns into which Z’EV inserts himself expertly, finding large chambers of space to deliver his machine-like hammerings, executing precise counterpoint rhythms which you or I would never have even discerned within these strange musical fabrics. An essential work!