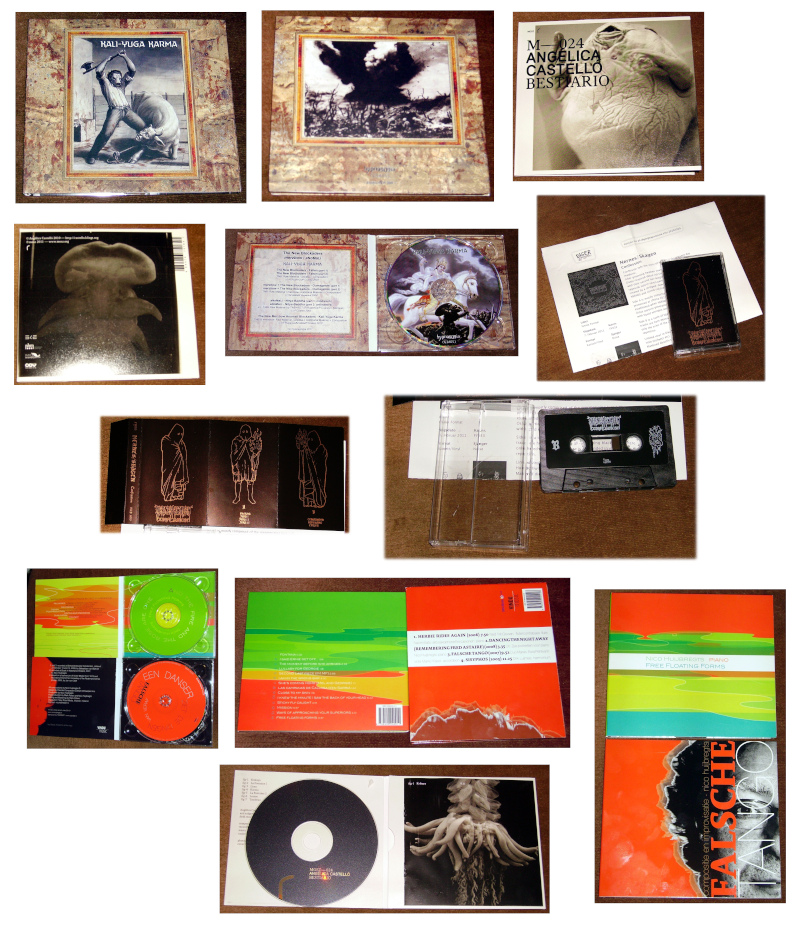 Men in robes chanting over groaning electric metal noise with hands of flame…it can only mean a new release by Nernes/Skagen, the Norwegian duo of Kjetil Nernes and Stian Skagen who deliberately restrict their instrumental choices the better to realise their infernal vistas and Dante-inspired dirges. Confession (FYSISK FORMAT FY033), realised mostly with a bass guitar, a Korg synth, and a demonic voice, happens to fit that particular iron gauntlet like a glove. I have received a cassette version of it, but I understand there’s a nice vinyl issue also with bronze and black artworks featuring decorative scrawls of gigantic demons, writhing nude bodies, and agitated serpents. Most of side one is occupied by a 2010 performance in Oslo which took place inside a particle generator and betokens many ghastly rites. But the B side offers more conventionally energetic heavy metal axe-shredding performed at minus-zero m.p.h., surrounded with foul billows of reeking smoke and other pollutants that contaminate the soul. In much the same vein as their fine relentless double-LP Ad Undas, this is a reliably grim bit of tonnage under which to smother your humanity.

Kali-Yuga Karma (HYPNAGOGIA GIA05) gathers together various 10″ vinyl releases by The New Blockaders, Merzbow and aNoMaLi in one handy package, and given that they have been out of circulation since 2003 and 2004 this reissue is most welcome. Falten and Oumagatoki were noted in TSP magazine on their release, the former being a dazzling piece of shattering noise in two parts, and a strong example of exactly what aNoMaLi can do when he gets the chance to apply his compositional skills to some TNB tape materials. Oumagatoki was the famed collaboration between Merzbow and TNB; it still resembles an unholy ice storm settling over darkened lands and pouring sleet down on the heads of unwilling inhabitants. aNoMaLi’s Nitya-Baddha has long been a personal favourite of this listener, and while it does recycle some 1989 fragments of TNB assaultage, it’s not simply brutal noise. For the most part I hear a very imaginative and varied piece of tape collage, containing plenty of surreal narrative content, quite disturbing to boot. The set is completed with a new (2010) tape collage which lasts slightly over five minutes, and sees the combined forces of all the above flattened and folded together into an intense wodge of merciless cubic roar. Both front and back cover images make clear the intentions of the musicians involved here, be it slaughter by axe or bomb device.

Bestiario (MOSZ 024) is a pleasing set of electro-acoustic compositions by Angélica Castelló, a trained academician and music teacher originally from Mexico who was since become a citizen of the world through her studies, travels, prize-winning works and festival appearances. Voice, acoustic instruments and field recordings are used here to create quiet but intense studies which slowly reveal their intriguing details; her use of bass frequencies through contrabass and subgreatbass recorders does lend a winning charm to these odd abstractions, and it’s noteworthy that she achieves many ambiguities through the use of very precise and ordered sounds. Refreshingly understated music with barely a hint of digital glitch involved in the process; I especially like the eerie creak and rattle of ‘La Fontaine 1’. Pascal Petignat provided the striking photos of insects and deep sea creatures.

Composer and pianist Nico Huijbregts kindly sent a couple examples of his work from Nijmegen. Falsche Tango (VINDU MUSIC 20101) reflects on various aspects of dance music and dancers, including a tribute to Fred Astaire on track two, but if you were expecting maybe a collection of show tunes you might not enjoy the modernist dissonances that trip from Huijbregts’s avant-garde compositions. The title track appealed to me though, a duo scored for viola and accordion which veers from Pierrot Lunaire to Morton Feldman in the space of 10 minutes; it’s also like a meeting between European cabaret music and Pierre Boulez wearing a red nose. ‘Sisyphos’ is another winner, written for the harmonium of Dirk Luijmes, who weaves some increasingly bizarre and mixed chords into the atmosphere with that wheezing instrument. Most synth players would give their right hand to achieve the effects he’s getting, which goes to show what imaginative composition and genuine playing skills can achieve. That said, Sisyphus is the last mythological character I’d associate with dancing skills! Free Floating Forms (VINDU MUSIC 20091) is a solo piano record by Huijbregts, 14 mostly short recits showing his improvising and compositional skills. It’s odd how many of them sound almost like the modal jazz of Bill Evans, but Huijbregts creates innovative hybrids all of his own, often injecting classical motifs and playful rondellos into his work, and has an unobtrusive technique manifested as a very light touch on the keys. The playfulness is reflected in his witty titles, some of which read like slightly world-weary updates on jazz standards and Tin Pan Alley classics.