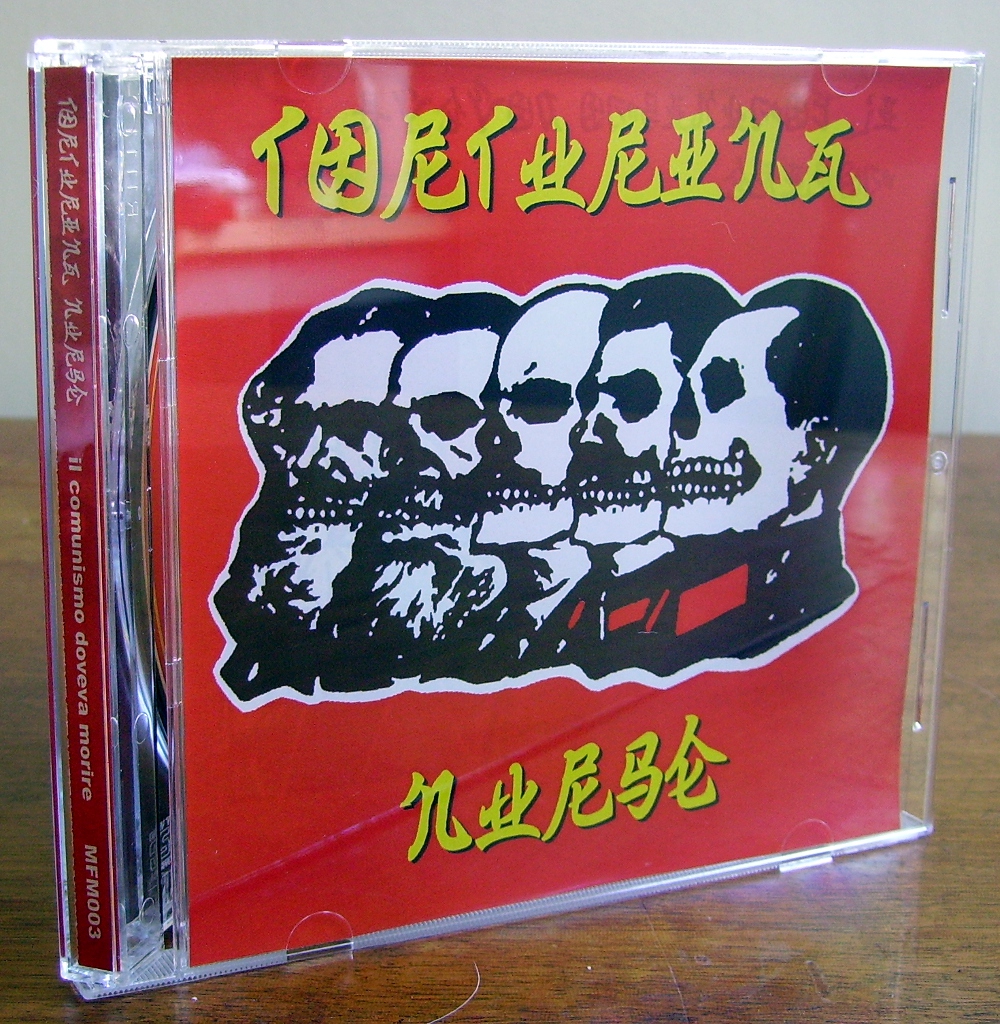 From April 12, a box of three multi-textured brain-crushing materials from Mind Flare Media in Charlottesville. Kristus Kut‘s offering is a tasty little oddity, mostly the work of Mr Kut performing with a bass guitar, various effects, his own voice, and a broomstick of curious proportions. With this idiosyncratic set-up, he manages to generate some highly charged atmospheric noise environments, grandiose in scope and scale, and determinedly refusing “the path of structure” which was associated with his previous incarnation, the power-industrial dynamo that was Abbatoir Rouge. Kristus Kut has also thrown himself headlong into the study of assorted non-Western belief systems, and intends his work to follow the same pattern of ritualistic order as that proposed by certain African, Caribbean and Afro-Brazil magicians and priests. In fine, Butterfly King (MFM004) will take the listener by the hand and lead him or her along a sequence of sexual initiation, with the guarantee that the happy purchaser will emerge from the chrysalis as a fully-formed butterfly with sexual prowess to match. After three mysterious episodes of dark broomstick shaking and bass-guitar reverberations that could overturn a bulldozer, there’s a brief spoken word interlude followed by three exceptionally powerful instances of complex, layered roaring noise, that conveys the unstoppable terror of a juggernaut. Chanting, deep wailing, moaning voices, many short repeated effects, loops and electronic noise attacks are among the elements carefully chosen to encourage and enhance the sex-magic rituals. Without a doubt Kristus Kut has the poptential to be the missing link between Arrington De Dionyso and Merzbow. The sleeve painting (by Wolf Englander) may look innocent at first glance, but like the music it’s laced with recondite symbols and esoterica. From 2009, with the help of guest musicians on percussion and voices; I gather that Kut’s live act is nowadays enhanced with the help of Jabu Warrior, an improvisatory dancer. You can bet those live shows are something Josephine Baker would never have dreamed of!

Crawling out from the hinterlands of Poland and Russia, the husband and wife team of MAAAA have been dealing out punishing live shows across Eastern Europe for the last four years, attempting to take all of their sonic interests – power electronics, table noise, industrial, hardcore and grindcore punk – and combine them into a solid lump of metallic noise. Decay And Demoralization (MFM002) contains six tracks of tremendous fatalistic and negative noise, performed with seething energy and close attention to shocking dynamics. MAAAA compel us to pay attention to what they’re doing by dint of their sheer ferocity – it’s virtually impossible to ignore these continual waves of anger and hate. Tracks 1-4 are short and punchy examples of their brutal craft, and were originally released in 2007 as a split with Torturing Nurse. There’s also one half of a split tape from 2008, and an entire CDR release Satan Edge, the latter doling out a full 40 minutes of unstoppable heavy flow; it’s like being trapped between the teeth of heavy gears and being melted in a vat of acid at the same time. “No computer generated sounds”, is the proud emblem of quality for their work; instead everything is hand-knitted from a tabletop of FX pedals, pre-recorded tapes, and lumps of metal (hopefully gnarled, rusty and ugly mis-shapes from the factory floor). The sleeve is beset with numerous images of decaying animals (fish and/or men) reduced to a skeletal state. All the above elements may give you the impression that MAAAA are simply pressing all the buttons that have been pressed by many other harsh-noisers for the last 30 years, but this is a strong release which I recommend.

The third serving in today’s helping of monstrosity comes from Torturing Nurse, the Chinese extreme noise act whose work was first picked up on the TSP radar in 2009, but they’ve been creating their own poisonous strand of noise for a good five years before that. Il Communismo Doveva Morire (MFM003) is an overwhelming onslaught that lasts for 75 minutes, and it’s one continuous track of incredible sound production that defies all logic and cannot really be described. For me, what stands out here is the high-quality reproduction process – every inhuman screech stands out with a stark and undeniable presence, not that you really care about how these sounds were being generated in the first place, but TN have at last succeeded in building a compact disc that stands by itself and produces in your living room the exact same experience of grotesque holy terror which they wreak on the stage. Torturing Nurse specialise in broken, unhealthy effects; it’s as though the glass window of a man’s soul were being continually shattered time and time again, in slow motion, by diabolical forces equipped with sledgehammers. Decorated in a handsome red, black and yellow cover using Communist propaganda materials from China and Russia (and a picture of skulls, of course), this is an utterly essential item for those whose inner chaos thrives on a diet of the dark and insufferable.