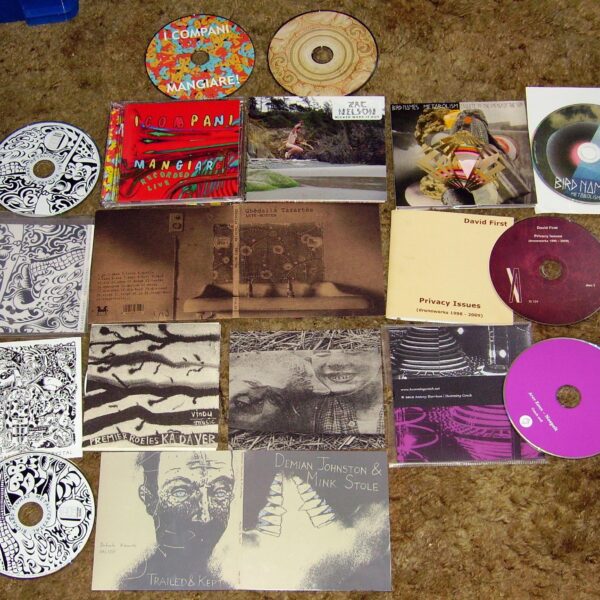 Excellent Dutch improv by Premier Roeles on Ka Da Ver (VINDU MUSIC VINDU20111). Nice to see this quartet still uses the old-fashioned term of “instant compositions”. The line-up is all-acoustic – drums, piano, bass and saxophones, and the music is full of lush free playing with an occasional nod towards jazz forms. Saxman Gerard van der Kamp really shines and Nico Huijbregts imaginatively fills many empty spaces with his McCoy Tyner-esque fills. Includes the 17-minute ‘Grasbestlevend’ where the players really stretch their feathered wings, although you may enjoy the four one-minute inventions sitting in the middle of the album. Odd image on the back cover of a fashion model underneath a dead mouse.

I Compani‘s Mangiare! (ICDISC.NL 1101) is a concept album inviting the listener to celebrate the joys of the table. This Dutch nine-piece play a strain of entertaining instrumental music which veers from smooth cocktail lounge to rollicking circus jazz, covering various romantic moods in between. A shade too mainstream for normal TSP turf, but it’s jolly music and they all play absolutely flawlessly. Recorded live in Nijmegen and Amsterdam.

Arev Konn is London sound-artist Antony Harrison, and Nospelt (HUMMING CONCH CONCH 008) is a solo set of loud drones released on this Berlin label. Excellent use of amplified guitars and analogue synths to generate many powerful mesmerising hums, spliced through with field recordings for additional grit. Pit Weber contributed to the title track, but I like ‘The Fourth Peninsula’ best, serving up sixteen minutes of ambiguous murk with a sinister intoning voice lurking somewhere in the background.

The great Richard Pinhas (French hero of 1970s electronic prog rock) has never been more prolific, and what’s more his new releases keep improving all the time. Metal / Crystal (CUNEIFORM RECORDS RUNE 308/309) is a huge double-CD sprawl of exciting and excessive sci-fi guitar and synth rock, and three of its six tracks come in at nearly half an hour apiece; plenty of room for intellectual science fiction readers to wander in these imaginary worlds. Merzbow, Wolf Eyes, and original members of Heldon all participated in the making of this monster, and the tracks are titled after various extreme mental states – starting with ‘Bi-Polarity’ and working up to ‘Schizophrenia’. Tremendous cover art by Yann Legendre. An overpowering feast of multi-tracked old-school rock sounds, with Pinhas’s guitar soaring like a jet fighter throughout.

Another sumptuous feast of American minimalism from the excellent David First, who we have not heard since his restaurant-themed Dave’s Waves record. Here’s a 3-CD collection called Privacy Issues: Droneworks 1996-2009 (XI RECORDS XI 134), a survey of extremely lengthy drone music pieces with a booklet of useful notes from the New York-based XI Records label. Disc one features some all-electronic heavy vibes (solo performances for theremin or e-bow) for those who like the analogue reverberations, but there’s also a composition played by a small ensemble using woodwinds, guitar, piano and violin – a five piece of players turning themselves into a well-tempered human chord. Disc three is a single piece played mostly by the trombones of Peter Zummo and Christopher McIntrye, although “Blue” Gene Tyranny also guests on keyboards on this Niblock-esque piece of musical solidity. Disc two offer us numerous shorter compositions and experiments, using transistor radios, computers and slide whistle. Truly immersive, powerful and shimmering tones to bathe in.

I’ve been dilatory in mentioning Ante-Mortem (HINTERZIMMER RECORDS HINT 09) by Ghédalia Tazartès, but only because I cannot think of a single useful thing to write about this astonishing record by an astonishing performer. Rational thought is confounded by the incredible singing of this Parisian-born Turkish genius, not to mention the instrumental arrangements, and the overall weird sound of the record, which at times is breath-taking and shockingly bold. A very idiosyncratic and inventive take on various forms of Middle Eastern music, often delivered in overpoweringly beautiful segments that last less than one minute. Alga Marghen are reissuing his (brief) back catalogue from 1979 onwards, but this is an essential addition to that collection.

No less eccentric in production and performance is Wicked Work it Out (PORTER RECORDS PRCD-4055) by Zac Nelson, a solo record by this member of Trawler Bycatch. 12 odd songs performed with stripped-down rock band arrangements pulling some surprising twists and performed with effortless skill; some guests add sax or extra guitar, but it’s mostly a solo affair. The real genius is in the vocals, which are piled high with melodic harmony overdubs until the record starts to resemble a freakoid version of The Fifth Dimension. Is that really his singing voice? He’s got a very sweet alto range; in fact I thought it was a woman singing, but I can’t find any printed evidence in the credits, so it must be him. Label are describing this as a nice balance of experimental and pop music, and I agree; a winning combination.