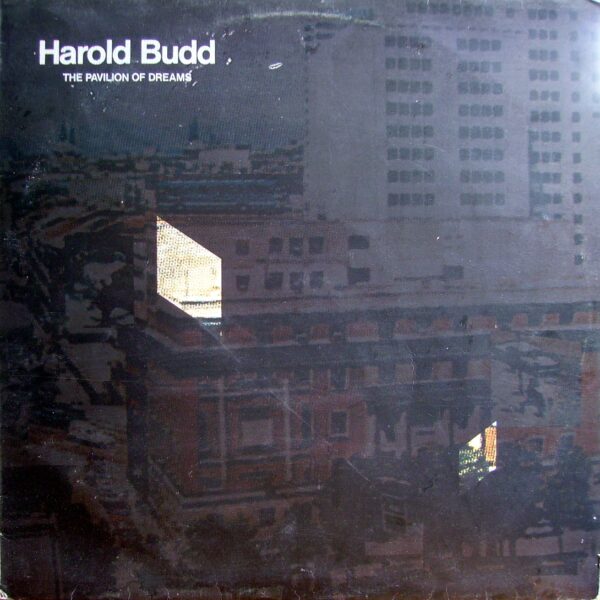 First released on Obscure Records in 1978 and then on Editions EG in 1981, this debut album for Harold Budd is a beautiful and meditative work. The music is usually labelled as ambient but it’s a mixture of instruments, styles and elements drawn from minimalism, jazz and formal compositional music for chamber music groups. True, the mood throughout the album is often reflective and gentle, and tends to encourage a restful state in the listener that is open to dreamy immersion. Having Brian Eno as producer, when he was at the peak of his career as a composer, musician and producer of ambient and mood music, probably doesn’t encourage the general public to see The Pavilion of Dreams as anything other than plain old ambient music but my impression is that Eno’s input is mainly to ensure a clear, high-quality sound for the whole recording so that the stillness of the space within and between tracks can be heard and felt by listeners along with the actual music. The silence becomes an important, even essential part of the music’s style.

The longest track ‘Bismillahi ‘rrahman ‘rrahim’ is a sparse and elegant atmospheric string of tone melodies played on marimba, glockenspiel and piano, over which alto saxophone either flies or sails, sometimes high overhead with pensive melodies or coasting gently close to the percussion as though on soft inaudible sea breezes. The mood of the piece invites contemplation or reflection on the world around us. Perhaps we should also wonder and be grateful for the things that we have, rather than think about the things we desire but can’t have. The music is deeply immersive and hypnotic and though it lacks an obvious climax and denouement and might be said to be low on dynamism in its steady meandering, it never comes across as boring in spite of its 18-minute length. That may be due to the pure and precise tones of the various instruments which draw in the mind and concentrate its attention deeply.

‘Two Songs’ continues the serene atmosphere and inward-looking mood with a mezzo soprano voice (Lynda Richardson) and harp (by Maggie Thomas) performing a hymn and another song together. Richardson’s crooning – no lyrics are sung on the album – is slightly melancholic in its soothing tones and the harp is continuously busy in its plucking as though vocals and harp have exchanged roles and the vocalist merely supports the harp as an ambient element as the stringed instrument throws out clips of melodies and tone filaments. The track segues into the even more introspective and wintry ‘Madrigals of the Rose Angel’ which adds five singers to Richardson to form a subdued chorus of sighing voices against piano, celeste and harp. The mood darkens and even becomes a little ominous; the celeste’s toy sparkle merely serves to make everything else seem even more brooding than it is. As with previous tracks, the music’s structure is spare and almost fragile and the sound tends rather to ebb back and forth as though controlled by forces not of human origin.

‘Juno’ is dominated by Budd’s piano and though it’s the brightest piece on the album, it still has its moments of melancholy and unease, especially in the various changes of key throughout the track. At times the virtuoso piano-playing threatens to go a little overboard but overall the piece is fairly restrained and retains a moody feel. Voices supplied by Budd and other musicians including Eno are very far back in the mix and are the weakest part of the song: they should be more upfront to give ‘Juno’ the passion it needs to counterbalance the languid music of the rest of the album. The coda is very striking in contrast with the track and the rest of the album in general and suggests an unpleasant or sudden awakening.

Don’t be deceived that this recording is merely a pleasant escape into a gentle drifting voyage on a sea of keyboard and percussion tones: the sea itself harbours unpredictable swells and the bright sky overhead may darken and grey clouds may gather over the distant horizon and sweep towards us. Likewise dreams may have hidden within them memories and impressions long forgotten or kept at bay by the conscious mind, only to jump out when the mind’s defences are relaxed.