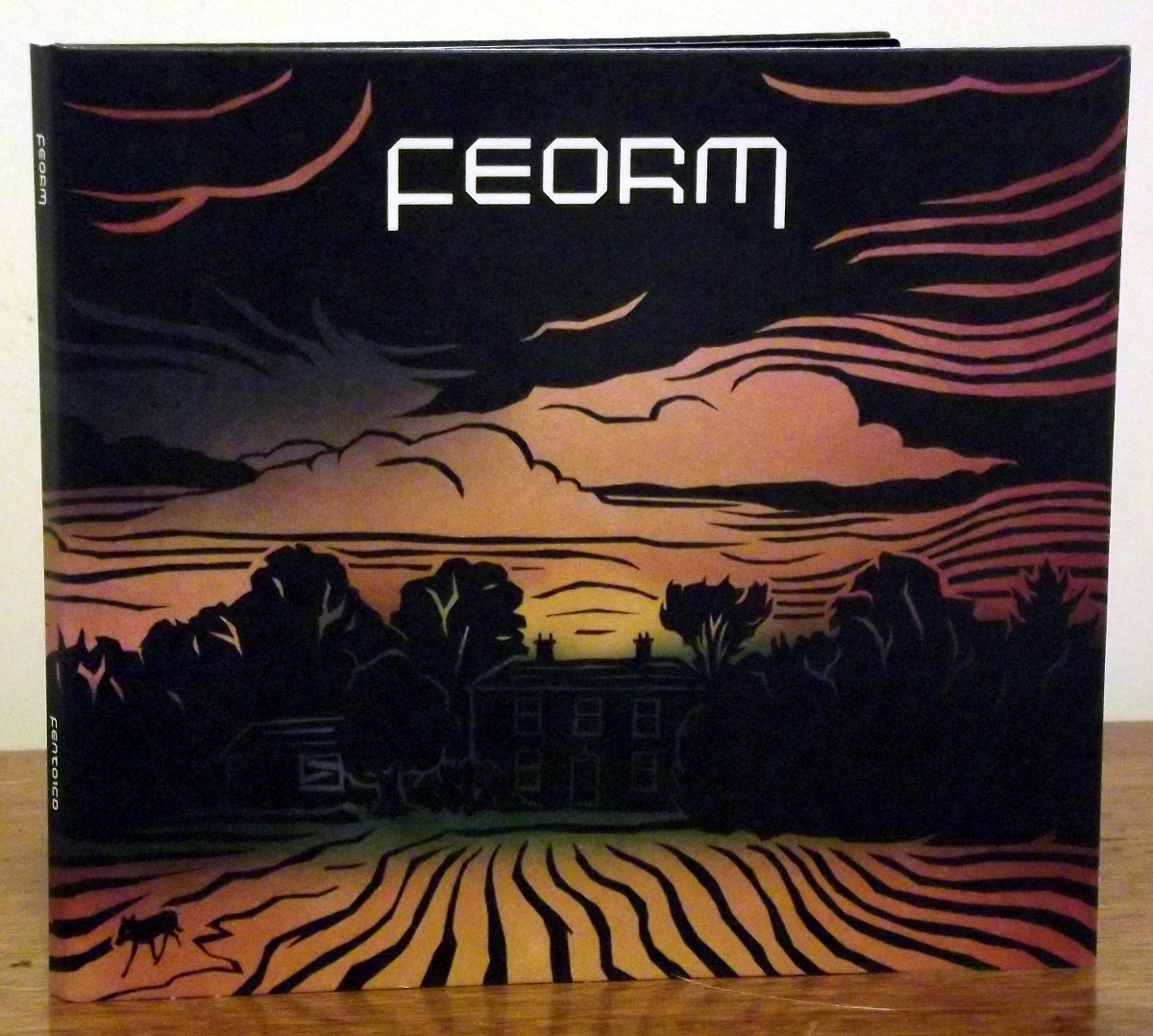 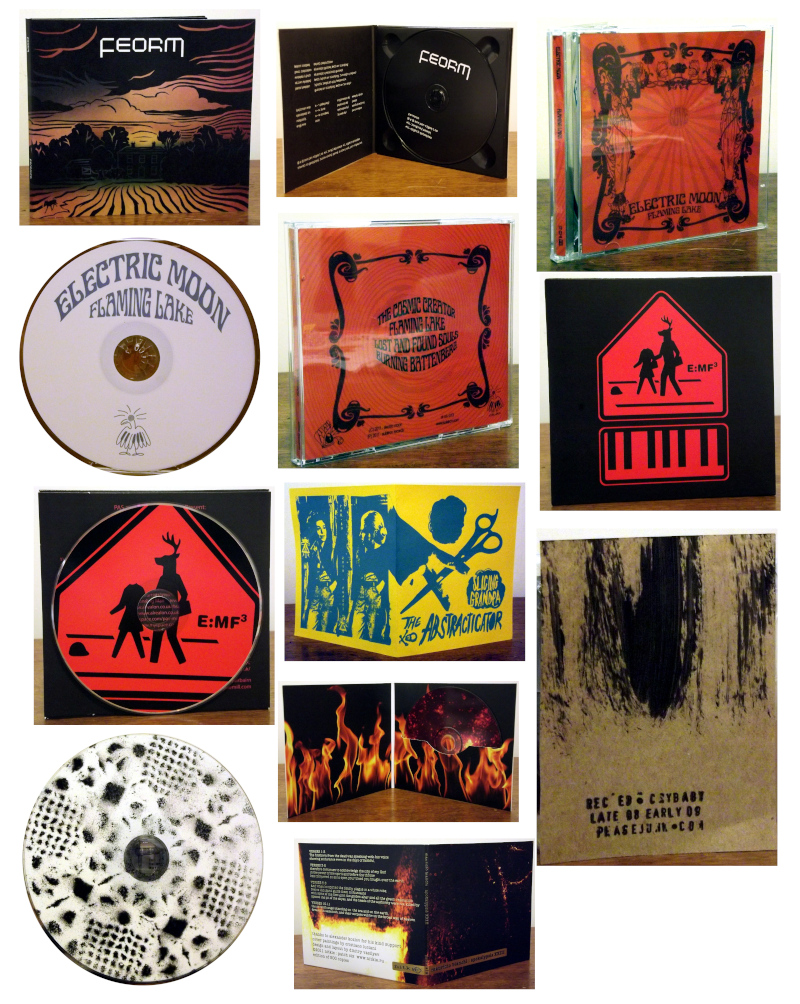 Creditable set of instrumental guitar-and-synth rock tunes from UK combo Feorm on what appears to be their debut release (FEN TIGER FENT01CD). Each four or five-minute piece feels like an episode of compressed jamming rather than a composed tune, and while no memorable melodies are emerging from their efforts as yet, they have a clean and distinctive sound, fit well around each other and leave sufficient space for mutual utterances, and manage to arrive at some quite pleasing results thereby. The press release treads carefully around the usual grab-bag of comparison points, which include progressive rock, Krautrock, punk rock and even post-rock (if anyone remembers much about bands like Tortoise and LaBradford), but Feorm are a bit too lovably English to approach any of the heights of excess and grandeur implied by that list, and it’ll take a few more years of seasoned playing before they could deliver anything approaching ‘Dark Star’ or ‘Careful with that axe Eugene’. Indeed their Englishness is such that the label are making much of the fact that the LP was rehearsed and recorded in a barn in rural Norfolk. Much promise here, in between the ambling noodly passages; let’s hope they cut loose and rock a bit louder and harder on their next release.

To my mind, Electric Moon are doing many of the things Feorm wish they could do, even though they are a rampantly eclectic band who self-consciously imitate psych, prog and kraut with relish and without shame, like most of the bands on Sulatron. Flaming Lake (SULATRON RECORDS ST CD-R 013) gives the band four long and sprawling tracks to spread their shimmering, acid-strewn wings and the trio of Alex, Sula Bassana and Komet Lulu wallow in psychedelic, bass-heavy swirlings like titanic cosmic hogs. Not a synth in sight, and all the groovy rich and full-on sounds throb forth from guitar and bass thanks to a generous board of effects pedals, including the ‘electric stullenbox’ which must surely be desired by every axeman who ever stumbled into a guitar shop in Denmark Street. Note also how the cover design goes directly back to the Alphonse Mucha and Art Nouveau motifs which influenced much psychedelic poster art in the first place. Such is my desire to become engulfed in this lake of fire, I’m currently being kitted out with a new fireproof scuba-diving suit.

From late August, another package from Robert Pepper of PAS Records in Brooklyn. Experi-MENTAL Compilation 2 (PAS RECORDS 012) is a joint release with the Alrealon label in the UK, and presents thirteen bands drawn from both labels and the Zeromoon label to boot. From the latter, we have the very fine Blue Sausage Infant and Violet, but from elsewhere there’s Carey Burtt, Richard Lainhart, Fester, Invisible Hand, The Expanding Man, Black Saturn and more. The comp refuses to follow any given “theme”, and it’s a curious mix of aggressive noise, wayward acoustic improvisation, mellow songs, ambient droning, complex synth electronica, electronic music with beats, melodic synth pop, and sullen inert music. It was produced in conjunction with a music festival of the same name in 2011.

Slicing Grandpa is one of the oddest names for a band we’ve stumbled over in recent weeks. I wish I could figure out who sent me The Abstracticator (PHASE! PHR 80), a 30-minute CDR on a Greek label, which is a winning slab of lo-fi rock punk noise delivered with admirable looseness and laissez-faire by this Seattle based duo, who started out playing in 1993 in New York state. Danger, murk and menace are their meat and drink, and they slip in and out of playing this brilliantly inane rock drivel like idiot-savants, creating sudden lulls to deliver eccentric vocal and percussion episodes. This interminable grunt might have been recorded at the wrong end of a vacant warehouse, or performed at a live gig at 3am, or both; it’s about as rough quality as you can get without resorting to taping over used cassettes (maybe they did that too), and part of any sense of coherence that spins off this shouty, grunged-up racket is down to the primitive stop-start edits as much as the primitive stop-start playing. Like Borbetomagus, it seems the band never lower themselves by deigning to “practice” their music more than is needed, which is about once a year. Good for them! Who knows, the grandpa they’re slicing up could be the decaying corpse of rock music itself. 60 copies only, nifty screenprinted cover.

As MB, Maurizio Bianchi apparently used to make extreme noise records in the 1980s, not one of which has graced my listening parlour as yet. Now he doesn’t do that any more, and Apokalypsis XXIII (NITKIE PATCH SIX) is a considered and refined set of electro-acoustic compositional work with a biblical theme. The texts on the back seem to be cut-ups of verses from the bible, vaguely matching up to what I regard as the slightly scrambled nature of the music, which pours out of the record like four flavours of jam mixed up with tins of treacle. In vain does the ear grasp for clear patterns or repetitions, and we’re soon lost in the corridors of highly-processed digital abstractions. Despite the imagery of flames and the implied end-of-the-world theme of the title, the music studiously avoids violence and tumult; instead, it emphasises the mysteriousness and opacity of the Revelations of St John the Divine, and may intend to convey the nature of that mystic’s isolated life on the island of Patmos. This one arrived here 25 May 2011.