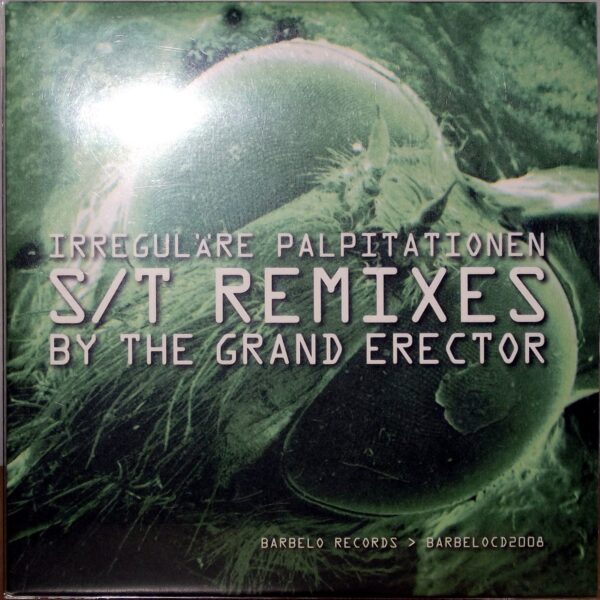 If you don’t mind the double-entendres in the artist name and album title, this recording of remixes of S/T songs by Andy Wilson aka The Grand Erector is quite a mind-spinning, party-going doozy. The entire disc is dominated by two very long remixes of the track “Irregulare Palpitationen” which more or less are the same but as the rhythm looping is soothing and hypnotic with not a little knowing seductiveness, these pieces carry the whole disc satisfactorily indeed. The drumming is relaxed and the guitars are one long river of droning chime noise in parts while a mix of organ and other radiant sound effects reach for the heavens in a way that bathes both tracks in a warm, loving psychedelic haze. There could be something sinister hidden in the music, in the way it insistently and relentlessly ploughs its rhythm furrow and the voice commands your attention and presses you to give him your mind, but overall “Irregulare Palpitationen” in its two remix versions seems a very serene and happy psychedelic rock track.

The Grand Erector guy didn’t really have to bother with remixing “Automobbing” and “Don’t tell me Lies” but as he’s done them, they’re worth checking over. “Automobbing > Clutch Mix” is a pleasant throb of clunking beat, an ebbing and flowing haze shimmer and lots of bleeps, bloops, melodic formations of these sounds and pleasant atmospheric wash and haze floating through the space over the rhythm structure established. Stronger and more barking sounds are added along with a sneering vocal as the track progresses. For what it is, the song is rather too long and could have been edited back to half its size: the clunky beat is headache-inducing if played loudly and there are only so many repetitive effects you can add before listeners zone right out of the remix. As for “Don’t tell me Lies”, the remix is so short it’s almost a case of “sneeze and you’ll miss it” despite its 5-minute run: at least it’s got a sharp and rough guitar-generated ringing drone riff soaring high and above the spoken vocal. Great to hear but a pity Wilson didn’t spend more time on it – he really could have bent it to his will and made even longer rings and loops out of that guitar drone.

Very trippy and psychedelic, not too tough but hard and sharp-edged enough: these remixes are sure to please a lot of people wanting good party clubbing music but something different from the usual techno-rave on offer.