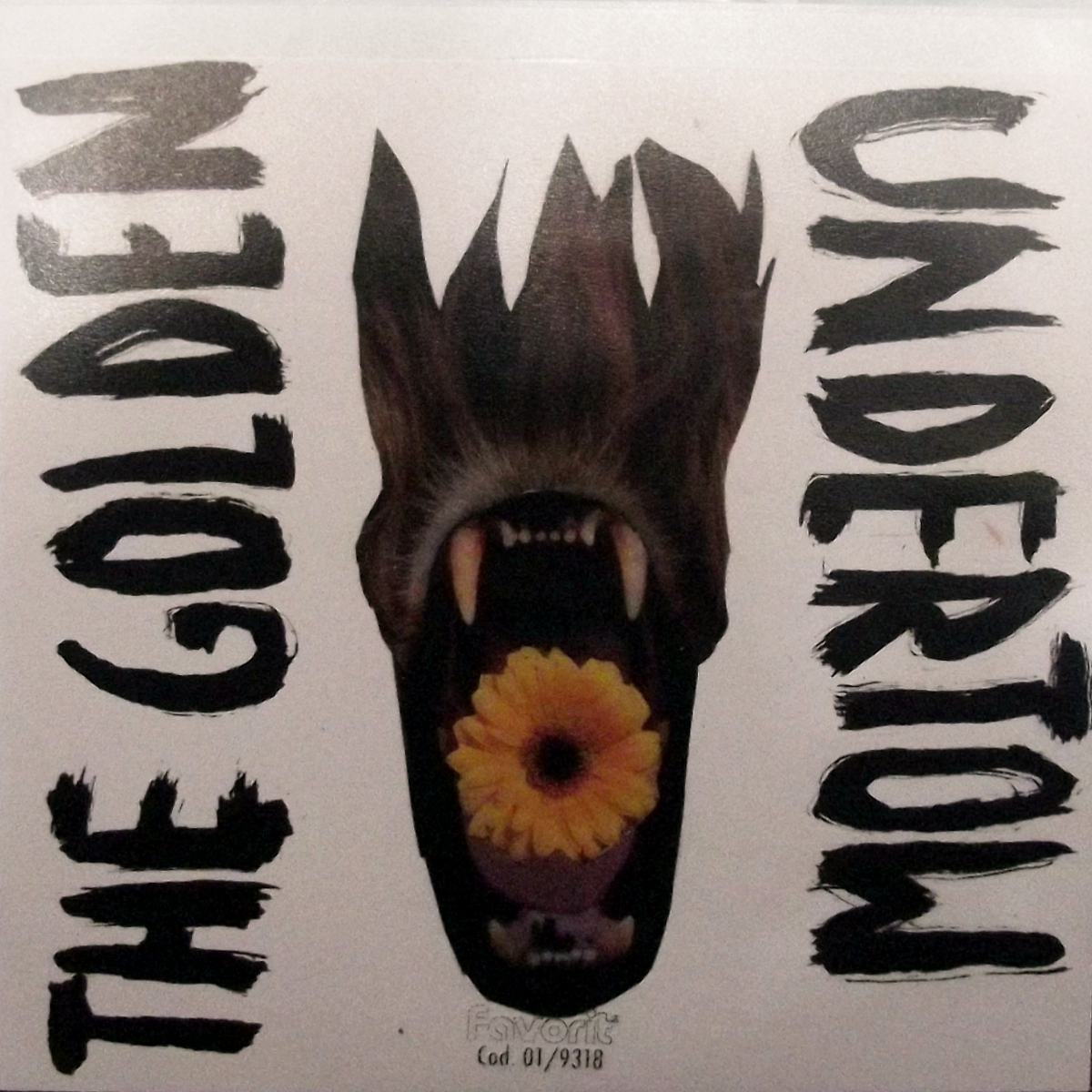 Ten songs of a rather lugubrious hue from the Italian singer-songwriter who calls himself Rella The Woodcutter. Previous albums have experimented with other genres, but on The Golden Undertow (BORING MACHINES BM037LP) he performs stark and deathly acoustic folk songs (sung in English), his pale declamatory voice accompanied by the barest of instrumental decoration – acoustic guitar, subdued electric guitar, recorder, or drum, usually restricting himself to one or two instruments per song. I enjoyed the melody and rhythm of ‘Bonobo’, where the simple bass drum and tambourine parts put one in mind instantly of Mo Tucker, but this song is uncharacteristic of the remainder of the album, which is gloomy and fog-bound, with many of the songs set in a sluggish minor key. As the tracks proceed, the singer’s voice becomes increasingly uncertain and forlorn, and he’s more like a wistful poet performing a recit than a full-blooded singer. In like manner, his vague lyrics become more wispy and introverted. Our interest is revived however by the eight-minute closer ‘Drugtime Family’, another song in thrall to the first Velvet Underground LP with its martial doom-march rhythm tempo not unlike ‘Venus In Furs’, and the acid-drenched guitars are cut through with an anguished lyric delivered via a shrill and capable melody. Rella would like to align himself with “psychedelic folk” music, and in song form at least is not far away from two of his heroes of the 1990s, that is Bill Callahan / Smog and Will Oldham / Palace. But for me he doesn’t quite exhibit the emotional depth of either, and I feel he could benefit from honing both his lyric-writing craft and his singing skills; the use of reverb on a microphone doesn’t adequately compensate for his thin delivery. Vinyl LP, limited to 300 copies.

Merzouga are two sound artists, Eva Popplein and Janko Hanushevsky based in Germany who take their name from a village in Morocco and have produced a few examples of radiophonic and voice work on their own imprint. On Mekong Morning Glory (GRUENREKORDER GRUEN 092), they produce a single 49-minute piece that is an ingenious work of electro-acoustic composition. The starting point was field recordings brought back from their journey on the Mekong river through Laos, Cambodia and Vietnam, which gave them a rich collection of field recordings of the tropical wildlife buzzing and swarming either side of the river banks. The second compositional element was musical, to wit subtle layers of strange music generated by Hanushevsky’s “prepared bass guitar”, an instrument altered through having sticks and metal inserted into the strings in the manner of Lee Ranaldo or Keith Rowe. Next came the electro-acoustic transformations of these sounds, where everything is subtly synthesised and changed – and it’s here the compositional process probably begins. We have heard quite a large number of experimental recordings that use the above processes in variant combinations or degrees, but Merzouga’s achievement is to shape their materials along the lines of a “compositional arc…inspired by the lower course of the river”. Geography itself has become their graphic score, and the idea is to create a heightened, semi-fantastic version of their river journey, and to this end the placement and ordering of each audible component is very deliberate and very precise. It’s significant, for example, that the sounds of urban civilisation and human voices are only heard quite late in the piece, such that nature and the wilderness (and children) are privileged in the compositional hierarchy. In case any of this creates for you a mental impression of the soundtrack to Apocalypse Now, that is probably quite deliberate, and the musicians even provide a printed paragraph from Conrad’s Heart of Darkness for comparative purposes. Mekong Morning Glory is not as outright dramatic or nightmarish as Walter Murch’s sound design for that piece of cinema, but it is compelling listening, and gradually passes on its own variety of mind-sapping strangeness to the enchanted listener. The enclosed booklet of notes and photographs proves to be a useful navigational aid for this eerie sonic boat ride.

Crystal Hell Pool is the evocative alias of Chris Majerus. His Domain (DEBACLE DBL066) album is 11 pieces of muscular electronic music with a slightly dark and aggressive tinge. He makes many distinctive sounds and his use of sequencers and drumbeats is simple and effective, while he wisely disciplines himself to not dip his fingers in the cookie-jar of filter effects too frequently. Some of the stark melodies on these instrumentals are quite attractive, and along with the semi-narrative titles such as ‘Radioactive Cop’ or ‘Abandoned Gate’ they seem to act as half-completed soundtrack cues for an imaginary science fiction movie. File alongside your collection of not dissimilar star-voyaging albums by Oneohtrix Point Never.

Rolling Bomber (HUBRO MUSIC HUBRO CD2512) is a mostly-percussion album played by Erland Dahlen. The basis for each of these seven tracks seems to be his 1940s Slingerland drumkit; he’s got one of the rare and collectible Rolling Bomber kits, which was manufactured using wood for the many of the parts usually made with metal, which was scarce as it was needed for the war effort. The American Slingerland company has made a significant contribution to the history of jazz music, traditions which this Norwegian jazz drummer hopes to advance with his very timbral exploration of the drums on this album. To each rattling and rumbling improvisation he adds overdubs of more percussion, including gongs, timpani, maracas, bells, log drum; and minimal melodies of ambient quirkiness, played on the kalimba or the musical saw. You may imagine that all of this patchworkery creates a very sumptuous and unusual sonic playground, and you’d be absolutely right; I’d be safe in saying I haven’t heard a record that sounds quite like this. In case the Harry Partch dimension here wasn’t clear enough for you, Dahlen also plays custom instruments hand-made by Hallvard W. Hagen, including the Cakeform With Springs 1 and certain box instruments; as one half of Xploding Plastix, Hagen has been spotted wearing the white jumpsuit affair that marks him out as an inventor-boffin type, which makes him ideally suited for an idiosyncratic release such as this one. In case you were wondering Rolling Bomber is a very rewarding listen, and while it can be slow-moving and melancholic in places, it is not simply process-based nor a stiffly formal exploration of drum timbres and percussive events. While it’s experimental in nature, Dahlen’s jazz sensibilities have not been left at home for the making of this record.