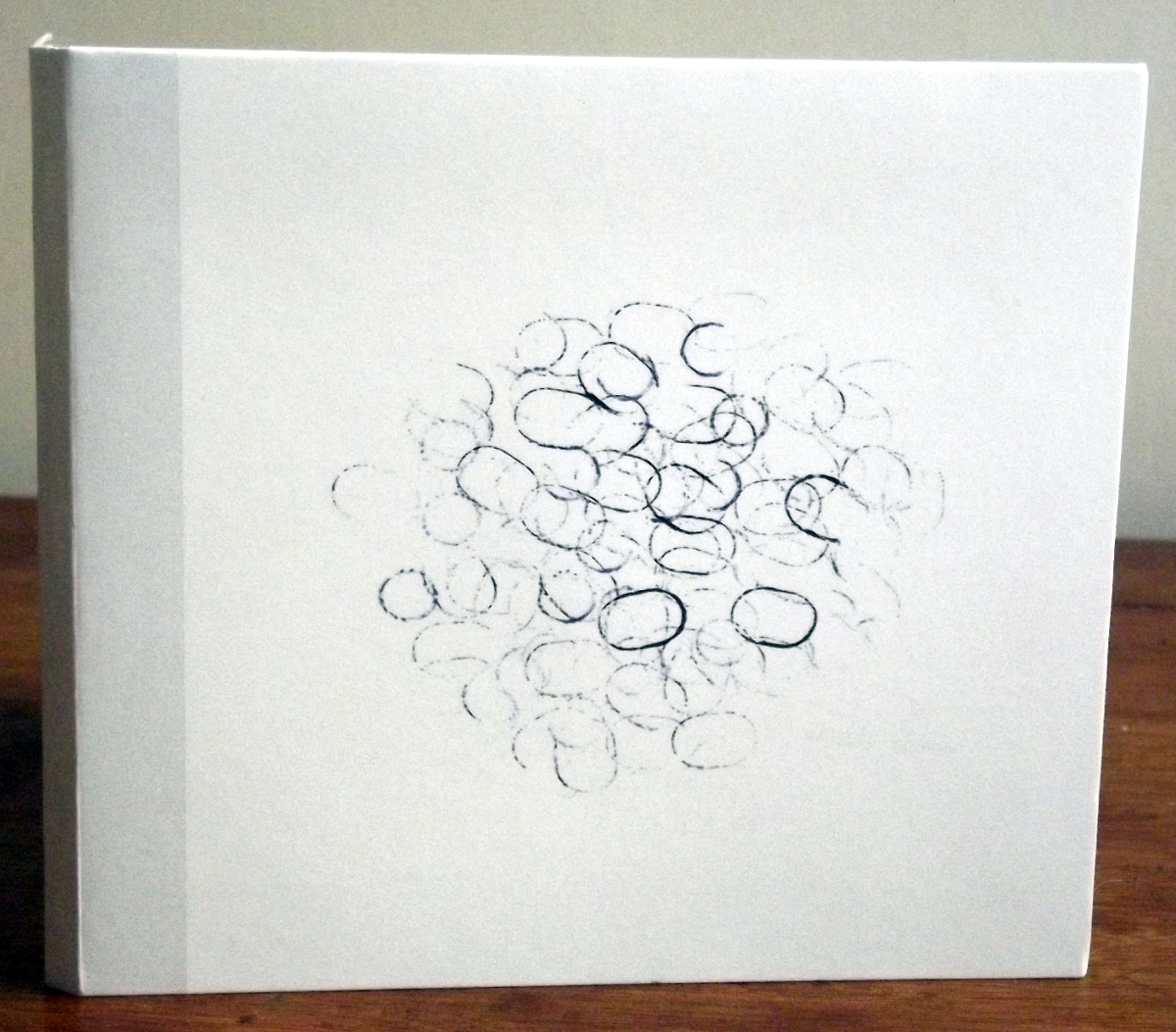 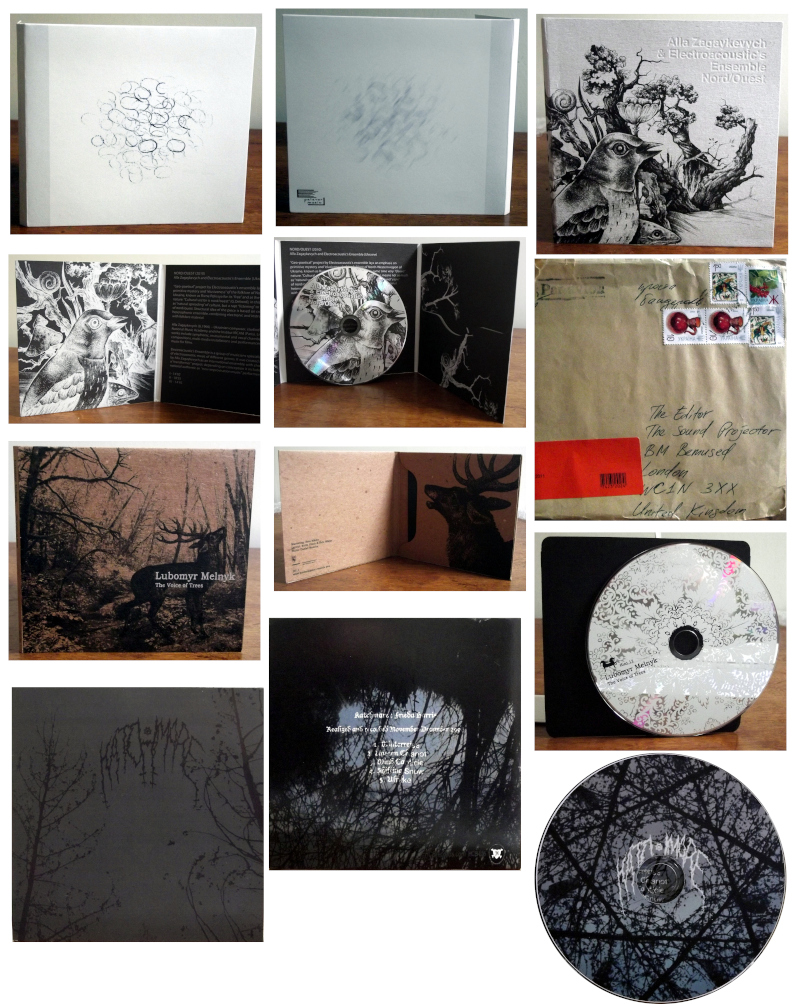 An intriguing mix of methods was used by Szilárd to realise his Spokes (PALAVER MUSIC PM001) album, which happens to be his solo debut and the first release on Palaver Press, and it arrived here from Brooklyn in December 2011. Ambient drones, plangent and suffused guitar playing, romantic piano music, field recordings of nature’s bounty (perhaps forests and bonfires) and spoken word using text from the French romantic poet Baudelaire, can all be heard on this gently beautiful album. All these elements are layered together so that the whole piece “rotates and shifts”, and gradually the suggestion of a narrative emerges from the textures, tones, and diverse droplets of information. It reminds me in places of a more subdued and discursive version of Joe Frawley, joined in places by a slow-motion Greg Malcolm. Szilárd is Jeremy Young who used to play the guitar in a post-rock band and is now making his first forays into experimental music, following a solo performance in Beijing at the behest of Yan Jun, the renowned Chinese sound artist and music critic. Young is clearly maintaining his Asian contact base, scoring films for Tomonari Nishikawa and inviting Aki Onda [1. Both Nishikawa and Onda live in NYC.] to contribute to the present release, and there is a certain “zen-like” vibe emanating from his soothing electro-acoustical work. Spokes may be slow-moving and almost static in places, but does not wear out its welcome nor descend into trite sentimentalities.

No less generous when it comes to the delivery of atmospheric clouds of mixed sound is Nord/Ouest (NEXSOUND NS67), a three-part piece of performed electro-acoustic music made by four Ukrainians. Alla Zagaykevych composed this enigmatic and dense statement on the “geo-poetical” condition of the world today, and he performs live electronics, Theremin and computer programming on the record; Sergiy Okhrumchuk adds a skittery violin to induce further tensions and stormy headaches into the mix, while Vadim Jovich supplies restless and nervy percussion blows that resemble the rattling of dry twigs on parched bones. Lastly there’s the vocalist Iryna Klymenko, hollering her strident folk-music inflected ululations with a sinewy assurance, thus completing what is a tasty and nourishing blend of chamber instruments, electronics, and human voice. This judicious small-ensemble approach is undoubtedly what keeps the music sounding so intimate and vivid, even when the gaseous billows of atonal music are so wildly unfamiliar to the ears. There are musicians who attempt this sort of thing and can’t seem to escape the trap of “blended frequencies”, by which I mean a steady decline into a flat, soupy morass of similar-sounding droniness. The Electroacoustic’s Ensemble [2. Oh! I hate that apostrophe, but it seems to be part of their name.], by contrast, maintain crisp separation throughout, such that all performers are clearly identifiable as surely as if they were specimens of insects pinned to a board. Which brings us neatly to the underlying theme of this unusual and enlightening record, which draws its inspiration directly from the folklore of North-West region of the Ukraine, a culture which is apparently characterised by its untethered and free-spirited thinking, yet also remains sunk in a very closed-off, isolated enclave. These central conflicts, mixed with a healthy interest in “primitive mystery and elusiveness”, have produced the sumptuous blends we now enjoy. Zagaykevych is a graduate of the National Music Academy in Kyiv and has studied at IRCAM, but the academic programme has not transformed him into a dry, patronising composer who wishes to fossilise folk culture through the medium of serious music. On the contrary, when you spend 15 or 20 minutes in the company of this mystical warbler, you will find yourself instantly attuned to the natural energies of the birds, fish, snails, trees and flowers which adorn the cover drawn by Alex Vorodeyev. What dark secrets might that sentient bird hold in its skull?

By chance, the composer Lubomyr Melnyk also happens to have been born in the Ukraine, although is based in Canada where he released much of his work on the Bandura Records label in the 1980s. The Voice Of Trees (HINT 12) was originally written in 1983 and now surfaces on the Swiss Hinterzimmer label, with an evocative photo and engraving collage of a stag in a forest, and may indeed constitute a thoughtful reissue of the Bandura original. A dance piece scored for two pianos and three tubas, it’s a prime example of the composer’s “continuous music”, a musical form which is largely based around Melnyk’s own personal technique of playing the piano using large numbers of notes packed densely into a compacted space, quite often performed at some speed. The important thing is that he’s able to sustain this approach for a generous length of time, as these two suites – both over 30 minutes apiece – will attest. Contrasting with the very tonal and melodic arpeggios of the three high-speed multi-note pianos, we hear the tuba section holding down a slower and slightly more sober counter-melody. The combined effect of all this is little short of majestic. It would be a pleasure to recommend this beautiful record to all listeners who enjoy the arpeggiated sonorities of Glass, Palestine and Riley, but Melnyk is free from any sort of conceptual-minimalist expectations and is free to soar high on his romantic wings. The wings of a Golden Eagle.

Also arrived late December and also with trees featuring prominently on the cover is Frieda Harris (HEART & CROSSBONE HCB036) by Katchmare, which happens to be another alias for the American musician Nick Hoffman. Katchmare’s intention here is not to expound on the joys of nature, but rather to dwell on the occult rituals embedded in the Winter solstice, to arrive at a meditation on the cycles of life and death. The opening track ‘Winterreise’ is, in title at least, a nod in the direction of classical composer Franz Schubert, but the underlying theme of the record is rooted in occult matters and makes explicit its homage to Frieda Harris. She was the wife of a baronet in England, mostly known for her association with Aleister Crowley. She became a sorceress in her own right, developed the concept of Projective Synthetic Geometry, and applied its rules to the design of the Thoth tarot cards which she painted for Crowley. Katchmare evokes all of the above evil complexity by using musical designs of almost pristine simplicity and purity; the opening 25-minute track, described as a “saturnine and freezing drone”, is a superbly bleak piece of gently-pulsating music with a thin, lugubrious and eerie tone, and the piece turns into a brilliantly enigmatic conclusion of gentle thumping as of unwanted poltergeists in the attic space above. ‘Wind Canticle’ is, I suppose, more conventionally threatening and unlike its washed-out twin it has as much presence as the instant thunderstorm whipped out of nowhere by Karswell, the magician in ‘Casting The Runes’ by M.R. James. I also appreciate the creeped-out effects on ‘Shifting Snow’ and ‘Ulrikke’; both are quite short yet evoke infinite landscapes with an economy of means, and I like the way the uncertain electronic sounds morph into even more uncertain shapes. This is a fine release which improves significantly on the basic model of Depressive / Cold / Ambient Black Metal, by dint of its restraint, discipline, and intellectual subtext. Originally recorded in 2008; here it is as a limited CDR.