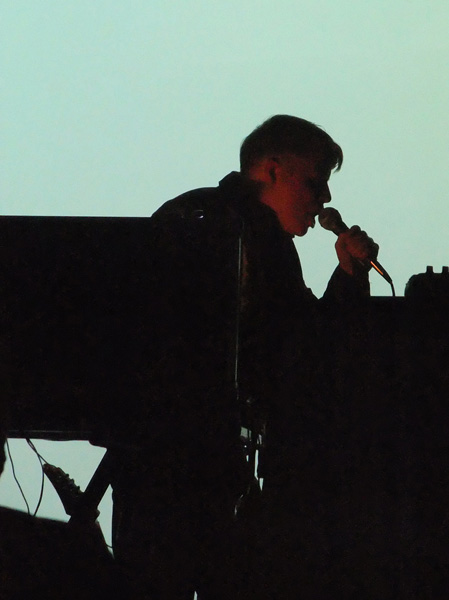 Iron Fist of the Sun, I will Never Have the Right, Finland, Freak Animal Records, CD (2011)

Iron Fist of the Sun (IFOTS) is the solo project of musician Lee Howard who hails from Birmingham, UK, and as far as I can find out, “I will Never Have the Right” is IFOTS’s second proper album release. Most of the music was recorded at Crushing Obelisk studios in Birmingham and I am guessing that like his debut “Behavioural Decline” which was released by Cold Spring Records, “I will Never …” was recorded in real time with much of the music done in one take. I like the style of power electronics on this album: it has a very steely edge and seems quite minimal and streamlined yet it brims with compressed intensity as if all the problems of the world were shoved into Howard’s brain and it’s almost bursting under the pressure of what it is forced to repress. Blunt-force tones and noises drone on and on blandly while Howard’s distorted and processed vocals, set back far beneath the blurry noise and quivering textures, squawk in frustration.

Apart from the last track, most songs are fairly short and consist of continuous drones, noise textures, constant pulsing and passages of sometimes blaring sound with Howard’s indecipherable lyrics squeaking under a layer of hiss. Repetition and looping to some extent help build structure and each track actually has a limited range of tones, textures and sounds so the album as a whole isn’t at all chaotic. An early outstanding example is “The Lady from behind the Hedge” which is very loud and noisy and features several very monotonous drones, all jarring and hissy, and other strange industrial noises: it seems a weird mix of Merzbow high-pressure spray-hose froth and early Whitehouse (I suspect I’ll be making those comparisons a lot in future reviews of IFOTS albums) but it’s very powerful and sterling stuff to hear. “Drink My Eye” is another good track held together by Howard’s tortured stuttering vocals and equally choppy frizzly electronic sounds.

There is tremendous anger behind the songs on offer here and a sense of helplessness and futility. Lee Howard is known to have an obsession with Diana Spencer the former Princess of Wales (in an abstract way and for what she represents to him) and an image of her appears on the CD sleeve’s front with part of her face obscured. That’s perhaps appropriate for a person whom we all think we know but in reality know very little about once the media image is stripped from her. There is a nihilist attitude expressed as well.