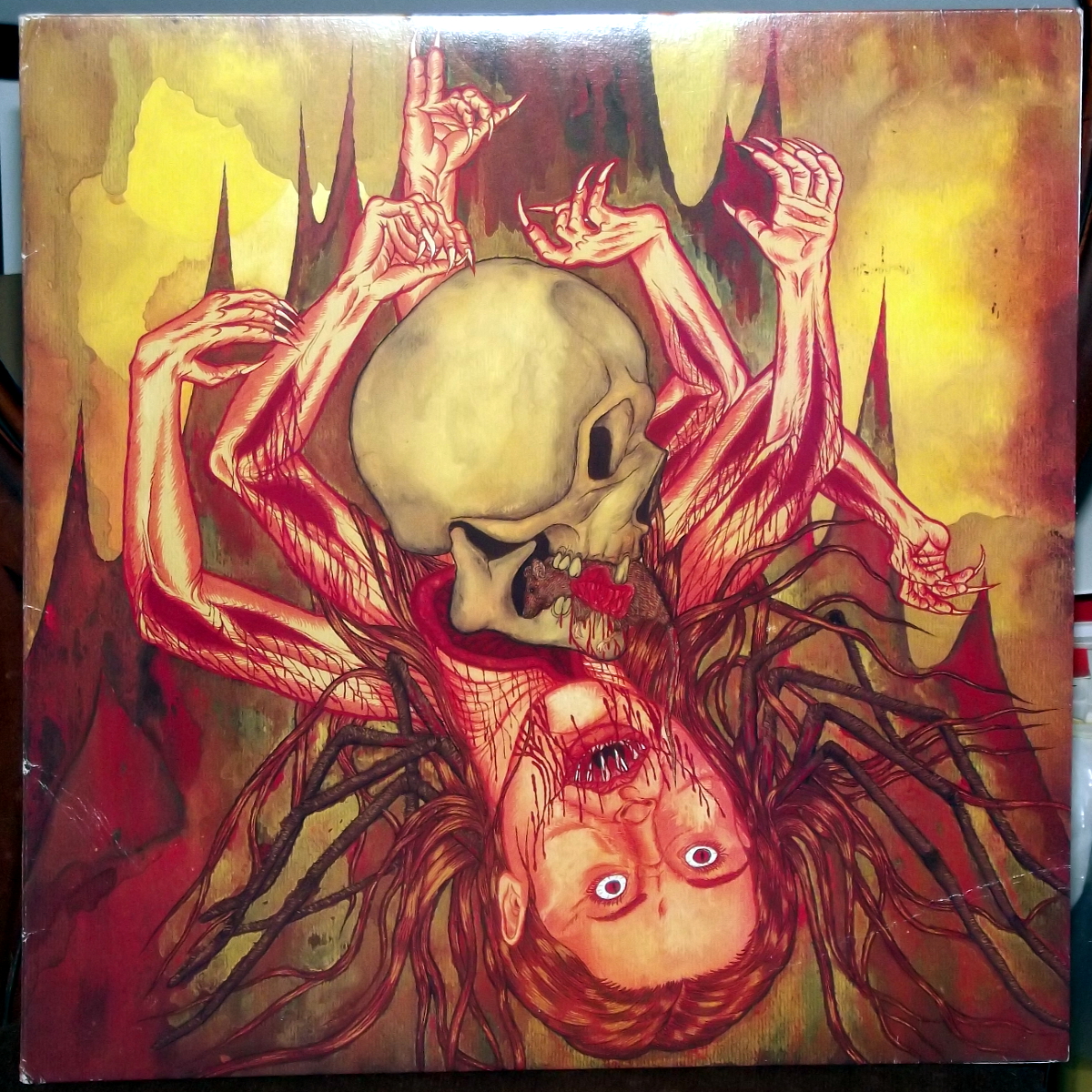 Sumptuous vinyl item here called Beasts For While (OWNNESS 11) from Collection of the Late Howell Bend. I was lucky enough to be sent a copy last summer (it was released October 2010), but if I’d bought a copy purely on the strength of that powerful cover painted by Matt Minter (not that there are many record shops in the world now where that scenario is possible) and brought this red vinyl pulsater talisman back home in one piece, I’d be praising the Gods of vinyl for my good fortune. Just four tracks, four eerie songs, from the trio of Irene Moon, Krysten Davis and Chantelle Dorsey. They perform with synths, violin, piano, a keyboard that makes a outer-space organ sound to rank with Sun Ra’s Solar Sound Instrument, and those singing voices – brittle, dour, spooky, cold….setting forth terrifying poetry in song with deathly precision and the cold certainty of predestination, as if retrieving lost Celtic folk songs from ancient days, or weaving spells….occult songs of night skies, stars, witches, old oak trees…strange processional marches to an unknown doom…

The mysterious worlds of Irene Moon have been something of a personal obsession here for a number of years, ever since we received a copy of the 2006 split LP they made with Warmer Milks. Intrigued by these primitive electronics (it sounded like electronic music made on wooden instruments) I wrote to the Begonia Society and received much treasured bounty in return. Among other things, it made me aware of the uncanny Auk Theater productions, videos of which can be witnessed on YouTube and UbuWeb. Irene Moon has been combining her entomological studies with music since 1997, and it would be wonderful if some day a kindly soul could gather together all the released effluvia from these endeavours, rescuing them from obscure cassettes and seven-inchers, and putting together a 3-CD+DVD box set that, if released and heard, would subtly begin a series of seismic events across the globe. However, that would be counter-productive; culture of this quality needs relative secrecy to thrive.

Back to the LP glowing in its red vinyl pressing like a meteor from Mars and its geometric sigils for labels. Even the size of it is a bit odd, not quite a full size twelve inch album. It’s a freakish 11″ to be precise – how could that even get manufactured? The recording quality is intimate, putting us in the room (hopefully a dark and damp cellar) with the instruments and their players, a muffled piano, a murmuring bass synth tone, and the uncanny creeped-out space organ sound (like a demented harpsichord). The one-take, spontaneous and creaky nature to these performances gives the impression the music is both instantly spontaneous, yet also composed and rehearsed. The ‘HaHa’ song sounds like the trio are almost making up the lyrics on the spot, yet they chime together telepathically on the repeated sections with nearly spot-on timing, uttering mirthless laughter in song like the three furies spinning a terrible fate. ‘Ruby In The Dust’ is as close to a love song as you’ll hear from the band here, but even the idea of couples meeting and communicating, ‘walking down the street…chance for eyes to meet’, is sung in such resigned, hollowed-out tones that love is rendered as remote a possibility as mankind ever landing on the planet Pluto. ‘Dominated By Splendor’ is the occultist highlight of side A, a spine-chilling nocturne of tangled words that’s underpinned by music bordering on the obsessive, I mean the single-minded way its spare notes are repeated…this is the one that transforms the trio into the three witches from Macbeth, the “weird sisters” creating a curse in song form. It’s fortunate that the record ends with a comparatively melodic and heartfelt instrumental, or we’d all be sleeping less easily in our beds tonight. This record is both intensely beautiful and quite terrifying, everything we should expect from real art. Mental note to self: any LP with skulls on the cover and red-orange colour scheme should be purchased instantly.