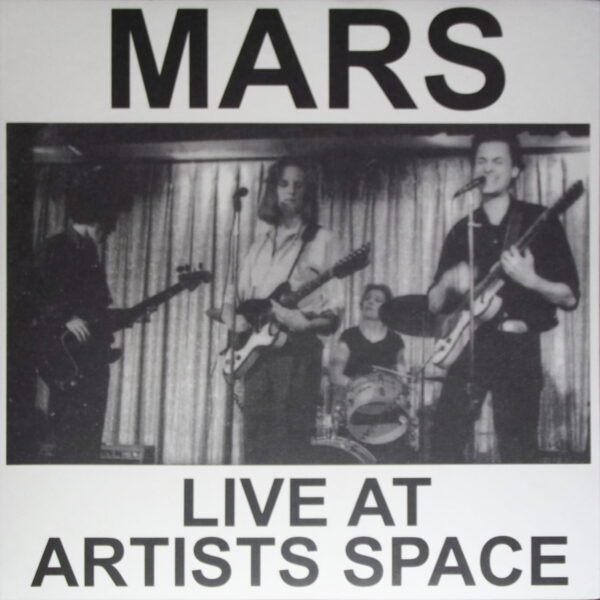 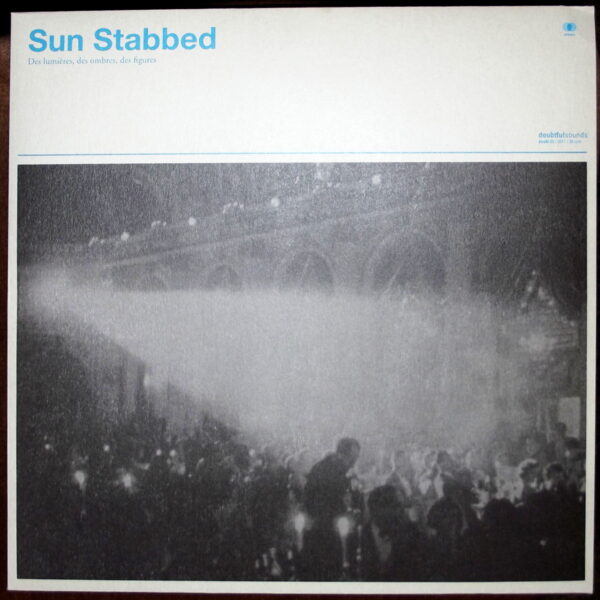 Standing In The Shadows

Got a great LP of guitar drone from the French duo of Sun Stabbed, who have been working at their craft in Grenoble since 2005. Actually Des Lumières, Des Ombres, Des Figures (DOUBTFUL SOUNDS DOUBT 06) is more like guitar drone-plus, what with the added elements of found tapes and distortion that have been folded into the record as part of its mixage/construction. Seems that the basic performances were captured in 2009, then worked on at the cutting table well into 2010. Given the simplicity of means, it’s a very compelling and satisfying listen, and after two sides of descending into this gentle maelstrom of strummed thrummery, I was hungry for more of the same. Those of you who crave excessive volume and amplification and Sunn O))) styled doom-drone might be disappointed, but Sun Stabbed have subtlety, much variation, and an underlying purpose to their strange drones, even when that very purpose remains opaque. Perhaps they keep it occluded deliberately; I like the obscure press note reference to “sound dérives”, which is not about deriving new sounds from odd combinations, but to the cultivation of a sense of “wandering” inside guitar noise much like the Situationists would perform their dérives, their arty-intellectual meanders and purposeless walks around Paris without aid of map. I haven’t encountered that sense of purposeful daydreaming in the construction of music since the time of Main, to take one example; Main’s inspired sense of taking a sound for a long walk stood them in good stead through many a CD in the 1990s. Sun Stabbed sound nothing like Main of course, and if anything they tend to resemble the best recorded moments of Ashtray Navigations – they have the same sense of limpid and oneiric mysteriousness to their muddy drones, an unreal zone where voices from the real world can sometimes drift in to perplexing effect, and where every image we see is a double-exposure on outdated film stock. In this context the evocative cover photograph by Pierre-Oliver Arnaud is very sympathetic. Now I think I’d like to hear their 2006 CDR Radio. Just the title of that one suggests they may use radio signals as part of their aural collaging, and it also puts me in mind of Radio Guitar, that superb and massively overlooked record by Peggy Awesh and Barbara Ess from 2001. 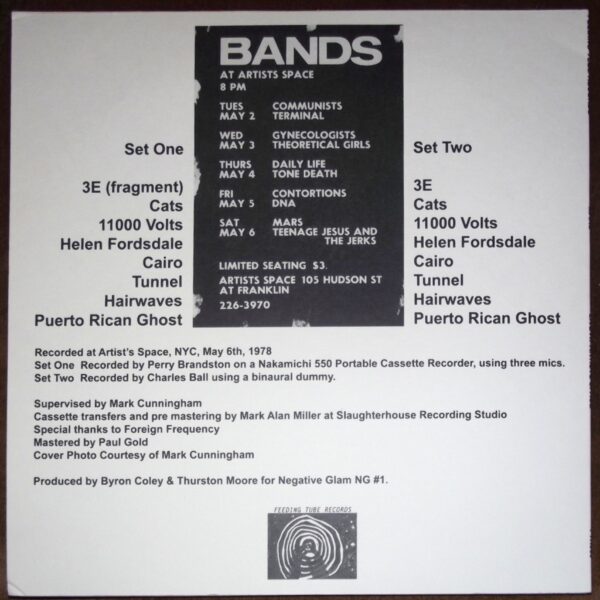 Barbara Ess was a member of Theoretical Girls, The Static and Y Pants of course, which I mention as a way of prefacing this live LP by Mars called Live At Artists Space (FEEDING TUBE RECORDS FTR068). The audience tapes here were made on 6 May 1978, and I don’t know if they ever circulated as boots, but this LP came out late last year – a production effort by Byron Coley and Thurston Moore issued as NG#1 on their Negative Glam imprint, and part of their agenda to rescue and contextualise important obscure music from history. The context of the original week-long run of live music in Manhattan was that it featured a clutch of bands now regarded as vital exponents of what has come to be termed “No Wave” American music (which I suppose roughly coincided with the rise of post-punk here in the UK). The researchers also inform us that nobody paid much attention to this event at the time, it was poorly attended and probably under-reported, yet it has since grown in the minds of many to achieve the sort of reverence we would normally reserve for the transit of Venus. Ten fine bands were featured (see list in photo of sleeve), Mars among them, and apparently it represented a meeting between bands from the Lower East Side and those from the Western realms of NYC; whether these combos were previously at daggers drawn, or just separated by geography, I don’t know.

As Mars were something I completely missed out on in every possible way in 1978, it was a lovely discovery for me to hear a copy of the Mars EP (recorded late 1978, issued in 1980) and the compilation of all their studio recordings put out by Important Records. There are so few studio recordings they all fit on one LP, and the Mars EP was recorded right at the very end of their career. On those five recordings the listener is obliged to reach for terms like “conflagration” and “meltdown” to describe the horrific guitar noise. On this live LP however we have eight songs rather than pure noise, and the band pretty much perform their whole repertoire twice over in two separate sets. Keen listeners will immediately notice the profound differences between the sets, even when the same material is the starting point. The tenor of the second set is largely resigned and fatalistic, whereas the band clearly still had some fighting spirit left on side one. I suppose the band saw the song form as an opportunity for radical reinvention and a chance to remake, restate, and start afresh 1. However, I’d be misrepresenting the music of Mars if I gave the impression it was somehow “experimental” or cerebral – the truth is that it comes across as 100% intuitive, the band grasping like possessed souls at any chance they can find for expression, for freedom. This is nothing like the calculated, mannered oddness of Talking Heads in 1978; it is genuinely alien and strange. What we hear is an unmistakeable raw and primitive honesty, juddering out in broken forms.

Listeners who enjoy that brokenness, and other desirable qualities like unusual guitar tunings, frantic strumming, disjointed noise bursts and general uneasiness in performed music will find much to enjoy here. The songs have lyrics, of which I could not make out a single word, and I’m glad; it’s not about verbal communication. The anguished howling and inarticulate spat-out grunts represent yet another attempt to bypass rational communication, to reach for something deeper. 90% of UK punk rock can be summed up by a very limited range of emotional expression (anger, frustration), but what emotions are portrayed here? Unrecognisable. Scary ones, for sure. The singer doesn’t know, but the driving need to express them is there. The team of Nancy Arlen, China Burg, Sumner Crane and Mark Cunningham apparently worked best in live performance rather than in the studio. Edgy and difficult documents like this confirm my view that the best music is in some way dangerous and threatening; I think Mars purposely took themselves into that zone of danger, and had to do it as live performance with an audience, just to counter-balance the powerful and intuitive dynamics at work within their foursome. It’s a wonder that they managed to keep on doing it for three years. Amazingly, there’s another record from the same period issued by this label which I hope to get soon, recorded on cassette by Brian Eno. Now I suggest you tune in to this and keep your appointment with the ‘Puerto Rican Ghost’.