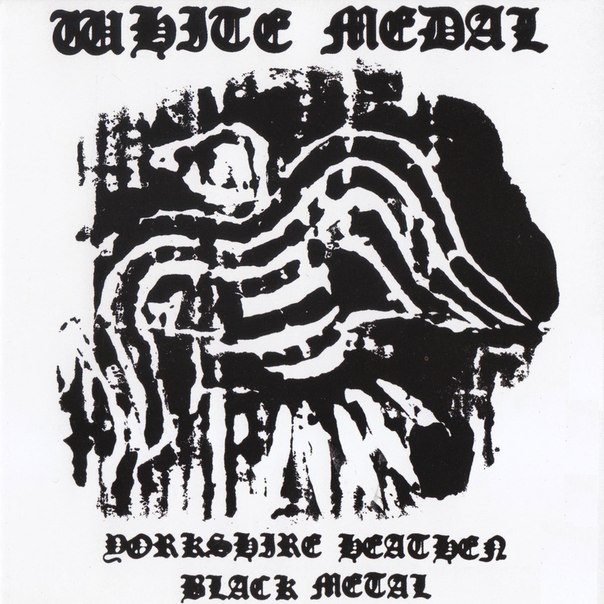 White Medal’s debut album “Yorkshire Heathen Black Metal” is a compilation of two demo recordings “Agbrigg Beast” (released in 2009) and “Alone as Owt” (2010) plus two unreleased tracks from 2010 and a song from another compilation released in 2011. The band’s schtick is to celebrate and champion northern English, in particular Yorkshire, culture and its Anglo-Saxon / Viking past and history, using the homely Yorkshire dialect of English, shot through with Old Norse vocabulary and ways of pronouncing English, as its language. Apart from that and the act’s use of a white rose, the emblem of Yorkshire, on all its releases including this one, the music is defiantly lo-fi in production, sound and delivery, and something of the style of the French Black Legions bands, with their energy and raw sound, is present on several songs across the compilation.

The music on the 2009 demo (tracks 1 – 7) is business-like with garage rock songs featuring repetitive riffs and lots of inhuman croaking and growling courtesy of the sole member of the band, one George Proctor. (Sounds a bit like your local church vicar in his 50s who might once have been a member of a Satanic heavy metal band in his teens but never mind.) While the title track comes across as melancholic, other tracks are very busy, too busy in fact to bother much with atmosphere or mood, and just rocket by. The rhythm can be very chuggy because of the poor sound quality, the vocals are raspy to the point of seeming goblin-like for the same reason. Our man George can turn on the emotion when the need arises: “Lost” has a very dejected mood and the song drags its heels for much of the song; likewise, “To Stone” is punkish and raw and the vocals, set back in the mix, have an air of desperation.

The 2010 demo (tracks 8 – 12) isn’t much of an advance musically on the previous recording and is less atmospheric as well. There are some good riffs that show Proctor’s talent for composing melody. It’s down though to the tracks coming later in the compilation (tracks 13 – 15) to give an indication of how far White Medal has come musically: “Buried under Runes” suggests that Proctor is adopting more ambient influences into the music and there is now some lead guitar soloing which lifts the track above its otherwise repetitive riffing template; and “T’Old Walls Brek” has a much more aggressive and hostile air with real roaring vocals. There’s something about the guitar work, something about its slightly echoing tone, on this track that reminds me a little of Akitsa at their most Quebecois-nationalist, and the instrumental parts are more complex than on the early demo recordings. The last track “Northumbrian Tyrants” is the best of the lot with a distinctive style emerging: the drums are huge, booming and drunken in their rhythms, the guitars have a distorted spidery buzz and the hugely improved vocals  express a range of mostly negative emotions such as hate, anger, malevolence and distrust. The production is much better and the sound reveals a cavernous 3D blackness in the music. The style is a mix of black metal, garage and punk, and a tough rock’n’roll spirit on the edge of chaos gives the song an extra dose of derangement and sets it apart from what’s gone before. Everything explodes in a glorious mad bash of angry drums, gabbling vocals and scrabbling guitar noise, all to be swept aside by a resounding crash and a ferocious growl.

That the music improves as it progresses chronologically is a good sign for White Medal’s future. The outro track points the way to success: taking out the music to the extreme as much as possible, risking all you’ve got and going near the edge of chaos and dementedness. What a way to go! (Although I’d advise Mr Proctor to adopt a proper black metal pseudonym like Azraa-eel, Malak al Maut, Homo Satanicus, Kriegserklarung, Iblis or Tibicena if he wishes to be taken seriously.)