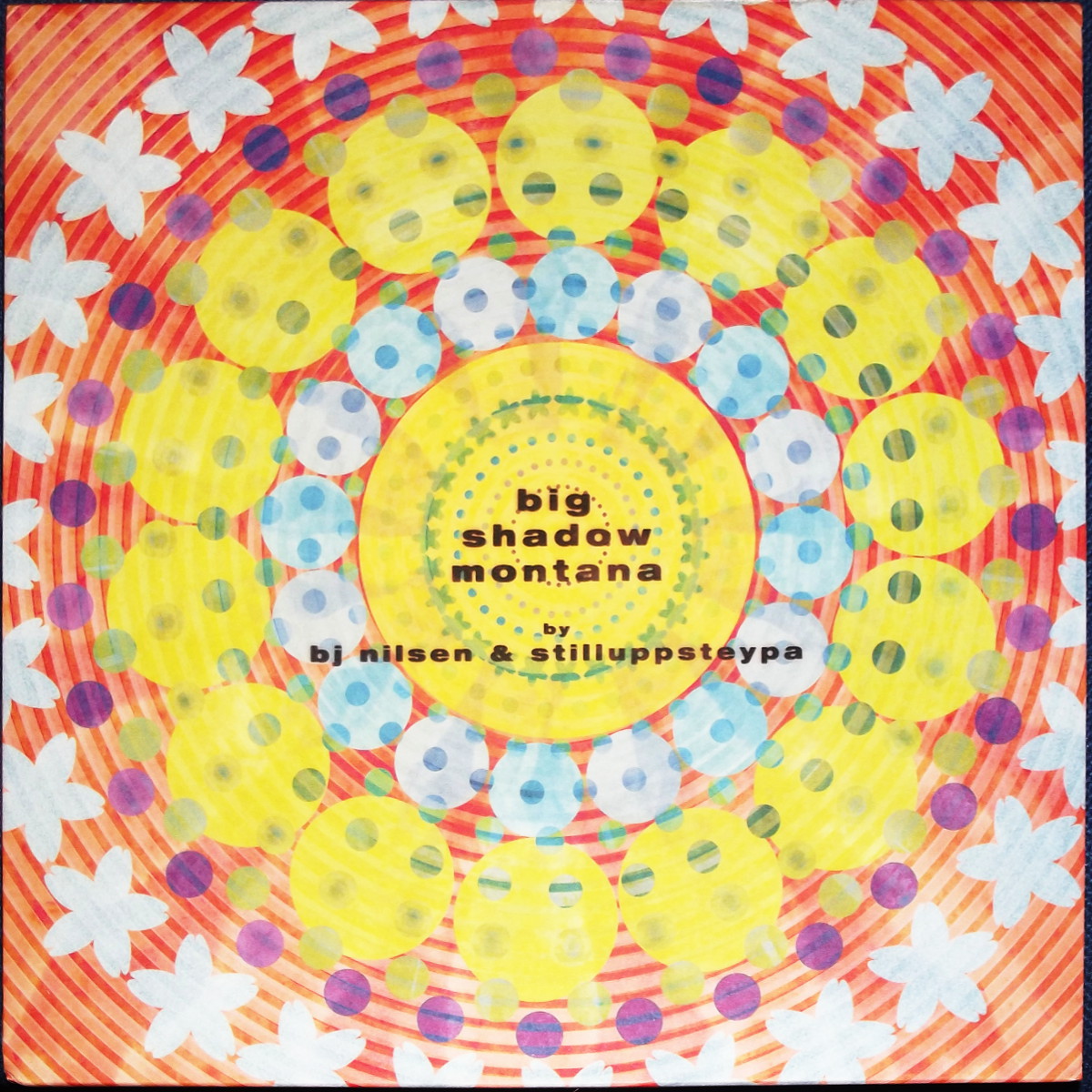 The Bunwinkies LP Maps Of Our New Constellations (FEEDING TUBE RECORDS FTR062) is a collection of acoustic songs from these fey American types who play plenty of acoustic guitars and sing, adding many pleasing instrumental touches from the piano, slide guitar, autoharp, melodica. They are particularly good with the percussion which ornaments in spare and original ways. So far we have like a model version of a country and western backing band, only reduced and updated for the no-nonsense 21st century. But there is also the strong singing voice of Beverly Ketch put to the fore, a voice which once it’s heard will bring a ray of sunshine to every tear duct. Her lyrics are about flowers, colours, life, skies, countryside, the weather, the seasons, the grass and the trees, and such. Mainly about the joys of looking at beautiful things and what we can learn about life thereby. Only a miserable bitterling could complain about that. Another telling song on side one is celebrating the values of the family and the simple country life, as opposed to being ruled by the tyranny of the clock and working for another man, presumably in the city with a huge pocket watch strapped to the back. This is sung by one of the male Bunwinkies. Apparently they like to project the idea of a rural family 1, even if the band members aren’t all quite related. The production is direct and clear. I like the very simple and plain arrangements – nothing is “hidden” or occluded under studio cloaks, and all the plain instrumental technique is there on full display. Pieces of homespun furniture might adorn the living room of this rural family if we ever visited. If carping, I might say their tunes are not especially original or memorable, and often the singers (the men in the band also vocalise) default to rather obvious melody lines which are already implied in their chord changes. But it’s still a jolly and assured sound they sing out with as they swagger and swing along the country road, without any free-form burbling or off-key nonsense that has oft-times been associated with lesser entries in the “free folk” genre. The album is a pleasant piece of non-weird Americana. From December 2011.

The Ship Chop LP (DEKORDER 059) is edited by Daniel Padden, the talented and visionary Glasgow composer who is also known as a member of Volcano The Bear. His Pause For The Jet LP for this label remains a fave in these quarters. This newie is a cut-up special, the result of a pro-active guerrilla raid on a record collection, perhaps his own, of ethnographic recordings. Apparently when he started his labours, he began keeping careful notes of sources, dates, countries, and other salient details that fell into his sampling sack, and then found that the work he produced was taking on a life of its own, at which point he decided the notes became superfluous. Or at any rate they were a degree of administrative detail which hampered the creative process. I take this to mean that he started out with an interest in significant geographical connections between the history of indigenous music, and then grew more interested in creating these exciting and weird collages that are a law unto themselves, coiled with an internal logic that only a Padden can explain. The results burned onto the vinyl are certainly rich in content. At any given time across these 11 tracks we could hear recordings from “at least three different countries”. Samples, snatches, loops, overlays, cut-ups, and multi-layered playbacks are among the techniques used to create this impossible fantasy of world history, expressed in tongue, foot, hand and arm. A great deal of ingenuity has been used in building these musical juxtapositions. Melody lines from weird bagpipes and horns, vocalists intoning in foreign or lost tongues, and invented rhythm patterns made perhaps from gamelan and drum samples. Unlike Ghédalia Tazartès say who would make it his mission to use ethnographic music history to terrify us with its strangeness, Padden takes a more approachable view and arrives at a sort of latterday Exotica concoction, applying the mannerisms and stylings of Martin Denny and Les Baxter as he boils and fricassees the record collection in the hard drive. He completes the assemblage (and emphasises the artifice of it all) by adding wonderfully contrived fragmented titles, some of which read like lost counsels from the writings of a wise Chinese philosopher, while some of them are just shopping lists of objects which might feasibly have been found in 1930s Africa, Peru or Thailand. Arrived November 2011.

Unusual and striking experiments in song form called Always Already (ASH INTERNATIONAL ASH 10.1) by Purity Supreme. I like the way the package presents a stern countenance explaining very little, assuming that we all know the parties involved; already the release feels like an odd riddle. Two songs on the A side. The main attraction to the listener is the singing-intoning voice of the lead singer, who may or may not be the French half of the act. Cracked and dusty their vocal cords be, whether through mannered device or naturally desiccated, trying to convey the effect of a dissolute and broken person. Just right for followers of Wm Burroughs we might think, but this sort of prose-speak-sing also shades into areas once occupied by Nick Cave or Michael Gira, as does the lugubrious and dense content. The lyrics are highly ambiguous, even when they seem straight to the point and use plain English at all times. I like to hear multiple repetitions of slightly mysterious phrases in songs and Purity Supreme does this trick very well. The first song keeps saying “It’s Nice To See You”, when the mood of the singer and indeed the music itself is expressing the exact opposite of that sentiment, and it’s a song that wishes we would just go home and stay there. Angst-ridden steel strings and a relentless drum pattern make this snarky item a vicious twin brother to Leonard Cohen’s later works. The second song is slightly more recognisable as something a weary Lou Reed might have recorded at any time between 1975 and 1988, and with its basic guitar and drum sound could almost pass for any decent slab of indie art-rock music. On the flip, even more words and more repetitions in the two remaining songs. So many words, these songs are more like recited poems or short stories really, very much like a slightly nastier Tom Waits or what we might hear if Charles Bukowski turned his throaty husk to song. Indeed the words are privileged by appearing in full on the front cover. And there’s a very strong cinematic component too, with vivid film noir images somehow encoded in the very sound of the record. Narrators alluding to scenes unknown, to backstories we cannot know, and delivered with a snarling curl to the lip at all times. The creators here are the French musician Christophe Van Huffel, and the American writer-composer Leslie Winer. Quite unusual, muscular, and opaque music from these offbeat modern beatniks.

[Updated above review 16/01/2013: I think I got genders wrong and misidentified performers.]

Big Shadow Montana (HELEN SCARSDALE AGENCY HMS020) is a rich abstract droner from BJ Nilsen teaming up with Stilluppsteypa. As electronic ambient mood music goes this is surprisingly rich and full of hidden information. A lot of hidden layers are buried in its vaguely shifting masses of treated sound, and odd segments bob to the surface until we can make out their shapes in the cauldron, at which point they vanish below again. Heavenly choirs, church organ, opera singers, and even some sitars are among these semi-occluded elements. The record even manages to morph into some musical passages now and again, rather than simply meandering around the textured fields of digital linoleum in padded Turkish slippers. To yield these results, much judicious selection and assembly of sources would have been a requisite discipline, methinks. A great deal of time spent by the creators listening and editing. Nilsen is very good at bringing a multitude of field recordings and samples together into a small space and somehow getting them to tell a story, in very loose terms. This one is like a psychedelic sleep-walk episode through a dayglo Tibetan landscape. It is divided up into subtle little episodes, and moves forward on its sluggish feet from one ambiguous stepping stone to the next. Lots of keyboards in evidence, in case I didn’t mention that. And a knack for breaking into a little pop melody when you least expect it. Arrived here 16 February 2012.