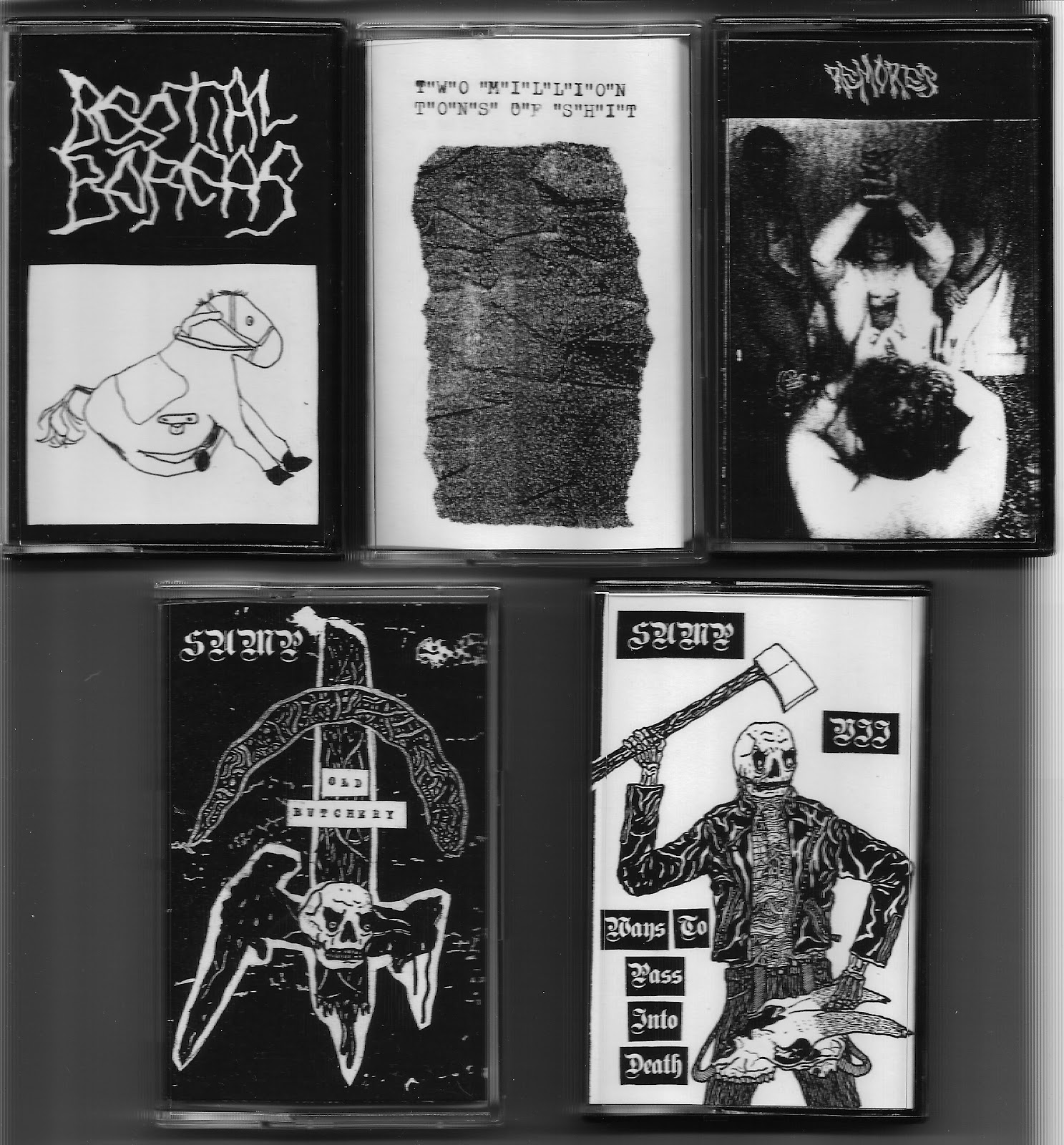 One peculiar phenomenon in black metal since it first reared its ugly head over 25 years ago (25 years ago! shouldn’t there have been a silver anniversary celebrated?!) that I’ve noted is that in terms of the number of bands playing in the style the scene has been thin on the ground in the United Kingdom compared to other Western countries of similar population size. Probably a big part of the reason is that doom metal, death metal, thrash and other genres are all still doing mighty big business and the scene might be a little crowded there, not to mention various other distractions like hiphop, grime, dancehall, the club scene and all its associated music genres, humiliating yourself before Simon Cowell, Sharon Osborne and whoever else is on the judging panel of “The X Factor”, going to school / work / job centre / emigration enquiries counter at the local Canadian / Australian / New Zealand / US consulate, and the general business of surviving in Camerongolia, that desolate land of cut-backs, faded hopes and past glories, that compete for one’s attention. Most such bands I have come across, like Caina, Fen, Winterfylleth and Wodensthrone, combine black metal with another genre, usually post-rock or folk.

In the last couple of months I’ve come across a few bands in west Yorkshire that all appear to be part of a small scene: the common denominators among several of them are two energetic fellows named George Proctor and Gareth Howells who play all instruments though not all at once. (Phew! At least there is something human about them.) In addition Proctor has other musical projects covering noise, industrial and other musical genres and operates a distribution label called Legion Blotan Records & Distribution. Well I guess he might have spare time to audition for “The X Factor” and build a science lab in his backyard.

Several of the bands already have songs uploaded to Youtube.com so I thought I’d showcase a few of them here. First up is Unkerd Wood who play a really cranky, noisy, crashing black metal style with some ambient and power electronics effects on “Woven Path”. The sound is incredibly harsh and distorted, like a washing machine grinding through scrap metal junk shoved into its bowl, and a lone shrieking guitar riff does battle with screechy high-pitched tones. Vocals are barely audible and they’re more sensed than heard for the most part. The Unkerd Wood trio have done another song “Volund’s Wings (Part 1)”, which is more structured and has a darker, moodier atmosphere with very conspicuous vocals: the style of music is still quite experimental with an emphasis on shrill howling metal guitar drones. It can be quite monotonous to listen to but the musicians seem to be having a jolly time and it’s a change from hearing other monotonous because looping-repetitive music.

Vanyar is a Tolkien-inspired band playing raw yet melodic BM who have done three demos and a split EP. What music I’ve come across so far seems quite sedate but the guitars are raw and noisy and the singing is of the screechy haranguing sort. Pure-toned synthesiser sounds round out the band’s style. A representative track is “Noldorin of Vanyarin Blood”, done in solemn epic style with dramatic percussion rhythms.

Arch Toll plays blackened death metal. So far the band has a full-length album “Poisener” (sic) to its name plus a split recording. Also not too far from a blackened death style is Rimethurses who also boast a member in common with Arch Toll (the ever-ubiquitous George Proctor).

Grandly named War Of The Roses is another Proctor project that also involves a member from Contra Ignem Fatuum. “Plantegenet Rule” has a strong epic feel with a raw vocal, howling lead guitar and a noisy guitar edge to the otherwise lumbering beat and pace. The song is dense and as it proceeds it has a suffocating, delirious ambience. Yet another Proctor project with a sound just as dense and mind-altering is Auldfeud if “Ratatoskr the Rat” is a representative song: the guitar wobbles in a very satisfyingly mind-destroying way and a brief instrumental section of echoing high-pitched lead guitar tones is a major highlight. A very different project that used to feature Proctor together with a Swedish guy was Gammal Sed whose song “Det ar Gammal Sed”, is as lo-fi in sound and production as can be and which has a defiantly avant-garde style in its shrieking vocals and strange percussion rhythms and beats.

All these acts have songs uploaded to Youtube, many of them by a guy calling himself Mutant Ape who turns out to be none other than … yes, you guessed right, our friend George again. (He’s called himself Mutant Bastard, Mutant Love, Mutant Prostitute, Mutant Sex Quartet and Mutant Turd among other things too.) Demos and other recordings can be bought from Legion Blotan Records & Distribution as well though the print runs may be quite small. There may be lots more bands in the western Yorkshire black metal scene I’ve missed out (and I’m going to do something separate on Sump and some bands associated with the scene but not based in Yorkshire) but it’s been hard keeping up with this Proctor fella who seems to propagate bands and projects that all have a distinctive raw lo-fi sound and corresponding style of thundering percussion rhythms and almost psychedelic squealy guitar as easily as rabbits clone themselves.