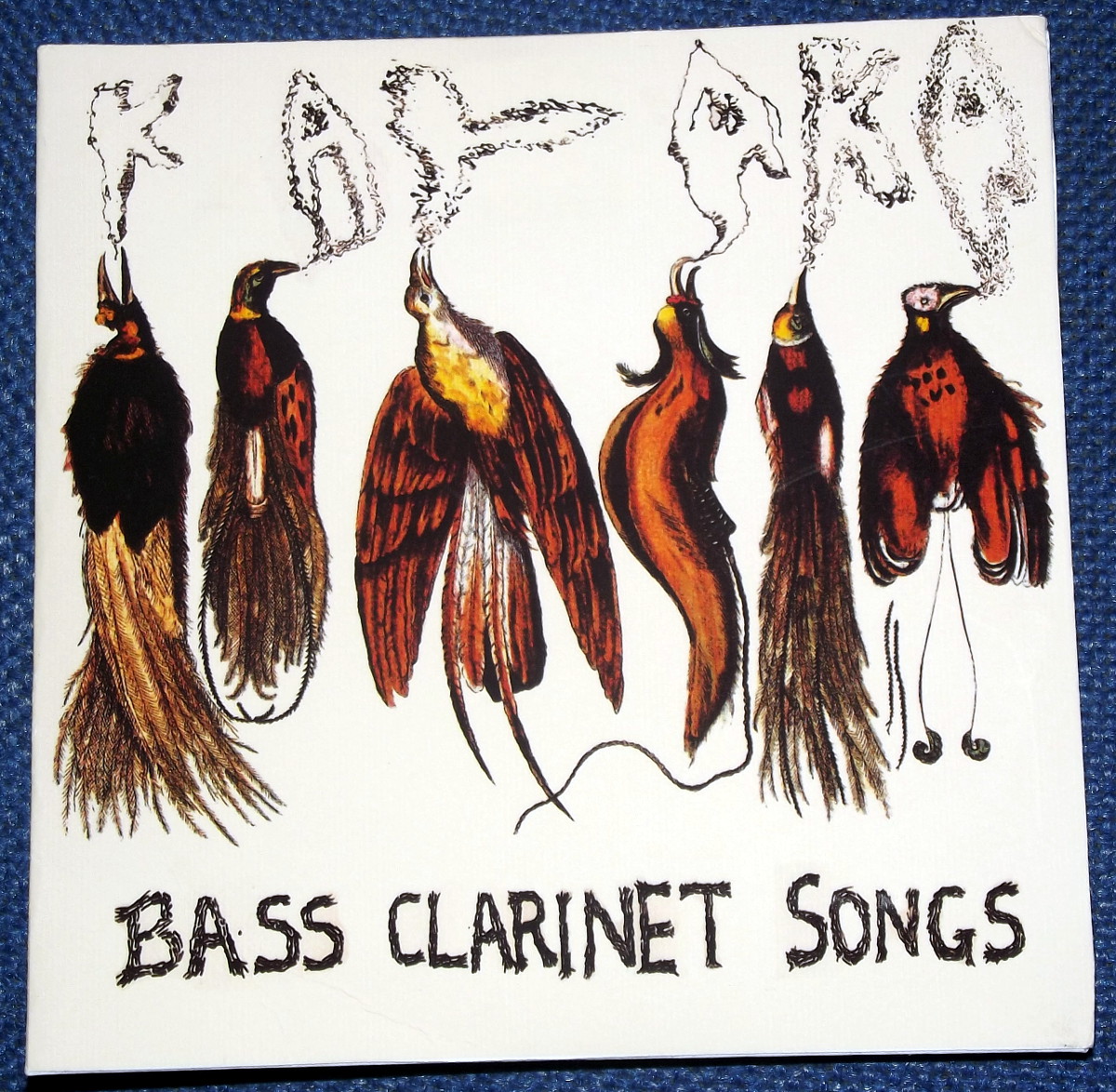 Kayaka is the lovely Japanese creator Kaya Kamijo whom we last heard from with her CDR Operation Deep Freeze in November 2011. Now that I think of it, Mantile Records in London has reissued that item with added bonus tracks on cassette in January this year. Kayaka sent us her Bass Clarinet Songs (SOI 065) in June 2012 and while she sent it from an address in Spain (she used to live in London), the item is released on a tiny Russian label called Spirals of Invention. “This album is simply dedicated to my bass clarinet and last period I stayed in North London in 2012,” she writes. On seven gorgeous and innovative cuts, her woodwind instrument is overdubbed, processed with echo, and overlaid with cluttering and clattering sounds effects – everything from trains arriving and departing, to a whirlwind in the kitchen cupboards, a neighing horse on ‘Lancelot’, and a typewriter on ‘Three Goats’. Truly moving and beautiful music, at times as alien and unsettling as the best electronic tones you could wish for, and through her understated juxtapositions she arrives at a form of sonic surrealism. She plays with the unfettered joy of a child with a large paintbox colouring everything that moves in red and purple shapes, and the world around her becomes magically transformed when she blows her instrument. Kayaka’s sheer love of life is what impresses us most strongly on these instant compositions, and her determined primitive creative strengths make a mockery of more refined musicians with their swanky improvising and composing ways. What a total delight!

Pat Gillis last wrote to us in January 2010. Now here’s another package from his HC3 Music label, the full-length Held To Account (HC3 TLCD3) which he created as TL0741. It’s a good name to work under. I used to think we’d all have numbers instead of names in the future, but now that seems a positively benign fate compared to what’s clearly going to become of us as we are ground to mulch by the inexorable wheels of monopoly capitalism. Our man Gillis may not share my bleak outlook on our existence, but his sonorous digital groanings and writhings on this outing do not betoken the mind of a fully contented man. He uses synths and tape manipulations like he was kneading bread dough mixed with solid concrete, trying to tame the slimy white filth much as the scuba diver wrestles with the vicious octopus. No root notes, no repetitions, no pulsations, no recognisable shape to these livid slabs of murk – just slices of menacing viscera torn straight from the flanks of a gigantic ox-like creature. Gillis performs everything live in one take, and regards his work as “unsettled dream music”. Purchase and spin this hallucinator and a palpable and unignorable presence will pour into your listening space like five-and-twenty unwanted fat ghosts, slobbering at the jowls. From 13 June 2012.

Luke Younger used to be part of Birds Of Delay. Now he operates solo as Helm and we have a copy of his Impossible Symmetry (PAN 27) LP sent to us 1st June 2012. Five long tracks spread across two sides of vinyl, where it seems the starting point was a live performance using acoustic elements to some degree. Through persistence, duration, and some quite extreme manipulation, the unusual sounds are treated until they go completely bonkers. Each track occupies a very distinct and tangible world; the insane model railway set of ‘Miniatures’ is a strong opener, but ‘Liskojen Yö’ is even more powerful and drags us into a subterranean world where lurking demons may be present hiding behind every stalagmite. The percussive and pulsatory components to this half-lit wonderland are pretty suffocating – Younger is just relentless in his persistent repetitions of small loops and fragments. Like its predecessor, this cut goes off the rails according to a pre-planned gradual scheme of attenuation, while an insistent gurgling high-pitched voice that sounds like a drowning animal in dire straits is gradually pushed forward to occupy the foreground. ‘Arcane Matters’ might be rather formless in comparison, but it’s got that full-on “fire and brimstone” effect that painters of the Underworld have been attempting to steer their palette towards ever since the glory days of John Martin, and it finishes up by flattening the listener and knocking all the air from your lungs. The sizzling ‘Stained Glass Electric’ is the bastard offspring of avant-techno music wreaking fatal havoc in Club Catastrophe, and only ‘Above All and Beyond’ seems to offer a remote sign of hope in this very contemporary vision of the urban apocalypse. Even here, Helm’s take on “soothing ambient drone” is one laced with unpleasant surprises, where even his cold rice pudding is served with a dollop of human blood instead of raspberry jam. An impressive collection of chilling electro-acoustic experimentation. Between the luxury editions of the Pan label and the numerous goodies emanating from Editions Mego, this is a good time for the vinyl-buying fan of electronic music.