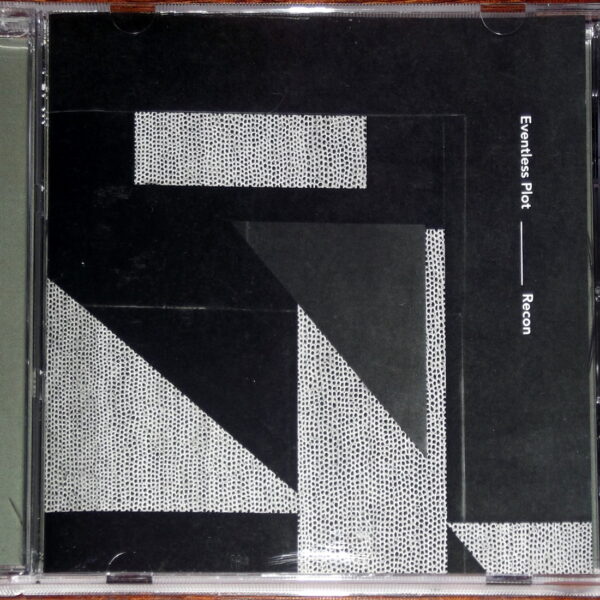 Eventless Plot are probably nobody; “Kanenas” 1 as Homer states through the mouth of Ulysses in Odyssey, in the favorite Cyclops scene. And fortunately this appears to be a recommended Plot in order to set up an electroacoustic Trojan horse in a stranger’s listening room and mind. However, according to the press release, Eventless Plot are a trio from Thessaloniki, Greece, playing a load of completely different instruments. The group is accompanied here by Stefanos Lazaristos (bass sax) and Angelica Vasquez (harp).

The first impression from their album Recon (AURAL TERRAINS TRRN0619 CD) is that the band resembles a group of villains carefully sharpening their knives, but remaining eventually harmless. This feeling of musical preparation quickly dissolves after carefully listening to the material. The only “preparation” that takes place here is that of the instruments utilized. The music in most of the album is very well balanced. This alone is a great achievement, since in many tracks you are subjected to totally different shapes of audio samples every few milliseconds.

The first track ‘Nozema’ is probably the soundtrack of a visit to an old wet factory. You will be surrounded by tired machines, flickering lights, leaking rooftops and perhaps mysterious bees ending up shouting in drones. ‘Non’ is the longest track in the album. It begins softly, but it evolves fast in a sort of mechanical compulsive repetition that gives its place to a high-pitched nausea accompanied by many short, percussive, whistling and even bubbling comments.

‘Recon’ is a melancholic yet powerful composition, orchestrated mainly with piano and various noisy electronic sounds. It begins in a fashion that reminds us of something like a edited-out electroacoustic piano exercise from the Faust Tapes or other early electronic music attempts, but as soon as the bass sax enters the scene, the track is shaped by an electronic jazz atmosphere.

‘Piano part I & II’ are the tracks that I could do without. They are surrounded by a cliché soundtrack aura and ultimately, I think, they don’t add anything distinctive to the album.

‘Chaos for real’ is not so chaotic as it states. It consists of multiple weird squeaking and whining string samples, produced probably by the harp and the psalterion (a very interesting medieval stringed instrument), resulting in pitiful castaway cries drowning into a sea of noise and mystery. Personally, I would appreciate a longer and more harsh approach to this track.

This album sounds by no means groundbreaking to the accustomed ear, but on the other hand, it is a very promising and beautifully interpreted electroacoustic music trip that is certainly worth the spin. Eventless Plot seem to have what it takes to compose significant music but they should try harder to settle on a more distinctive style.