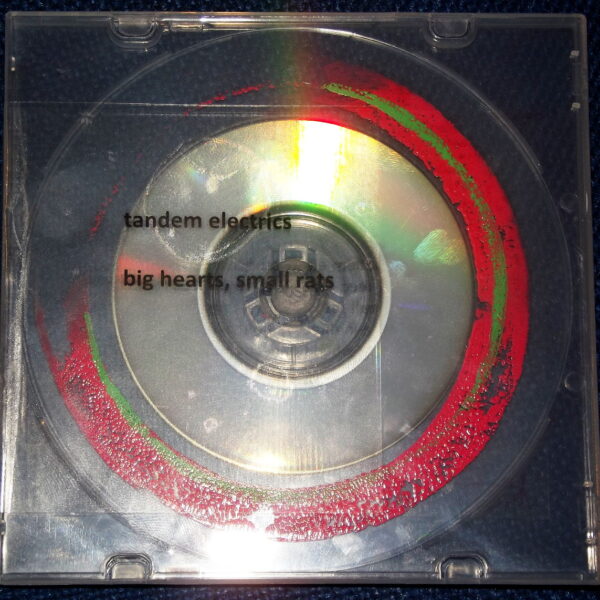 Tandem Electrics pairs Richard Kamerman with Reed Evan Rosenberg, the former being CFYR label boss and the latter being the man who assaulted our senses about 12 months ago as one half of Keroaän with a hideously inhuman noise experiment. Big Hearts, Small Rats (COPY FOR YOUR RECORDS CFYRF04) thankfully parks the brutality in the alleyway while conducting its perplexing experiment in electronic sound art, with Lefty and Moe both giving us plenty of face-time with Our Lady of the Mystery Volts. Terms printed on CDR cover such as “line-in direct” and “no mastering” serve to emphasise the ultra-raw Art Brut characteristics of the production of this hot-beef deli snack, so fresh that the steers themselves are talking to you through their horns even while their very necks are wedged into the dining table awaiting the cleaver’s chop. In just 16 and one-half minutes, an eternity of tension and nerve-jangling atmosphere is generated and executed, ruthlessly. Rats!

More troublesome beauty from same label by Ruez on Brise Soleil (CFYRT05). On this rough cassette of process music, Eric Laska chases one process after another, as if trying to exterminate the vermin in his building through use of giant alligators. Starting point appears to have been electronic source material generated by most random means possible and being almost totally neutral (white noise) in nature, though I am intrigued by the potential of a “lattice filter” whatever that may be. If I could affix such a screen to the front of my Play-Doh Fun Factory, I expect the coloured glop would emerge strained in semi-woven string patterns, as surely as a fat man walking through a wire mesh fence. Ruez’s inert source material is then fed through a system-based process which I think is also capable of generating silence at random points in the playback. Sharpoid stuff when it catches fire in its bad-tempered android way, and even when those silent gaps can be a bit lengthy and aggravating, the music we do hear has a steely core of aloofness that appears supremely indifferent to our approbation. Laska may or may not aspire to some enhanced form of Cagean composition with this compacted statement.

Heck, while we’re in the neighbourhood might as well spin the cassette (CFYRT03) from Gintas K on this label too. It’s a bubbling charmer of hot mud. This Lithuanian stitcher has had his dark embroideries released by Cronica and Zeromoon to my knowledge, and now here he is with a full-length set of improvised pieces he made in 2011. In contrast to Ruez and his strict rules, Gintas K is just letting it all sprawl out over his workstation like so much electro-acoustic gruel being spoon-fed into the mouth of a recalcitrant infant. Very painterly, very intuitive, and achieving results that are like fragments of broken music being soldered and glued back together again. On this outing at least, Gintas K is driven to prove that he can push the machines around and win, injecting lengthy slabs of unpredictable noise with a vaguely aerated and gaseous vibe. The 18-minute piece on side A is especially noteworthy, like a melted cheese sandwich bubbling under the grill with its own built-in indigestion tablet for the comfort of the elderly diner. The B side contains somewhat more robotic and mechanical drones, every second of the inhuman surfaces studded with ornate décor and invention. Also some uncanny staccato effects and interpolations, redolent of Venusian plant life budding and spawning under the hot moons of another galaxy.